Green Infrastructure: Infiltration practices can be an important tool for retention and detention of stormwater runoff and treatment of pollutants in stormwater runoff. If the practice utilizes vegetation, additional benefits may include cleaner air, carbon sequestration, improved biological habitat, and aesthetic value.

Case studies of stormwater infiltration systems, including one underground system, are presented below.

Information: Reference to any specific commercial product, process, or service by trade name, trademark, service mark, manufacturer, or otherwise does not constitute or imply endorsement, recommendation, or favoring by the Minnesota Pollution Control Agency. 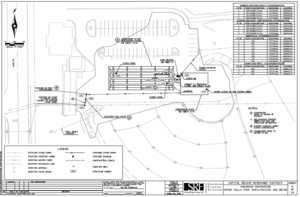 Plan layout of infiltration and reuse systems. Click on mage to enlarge. 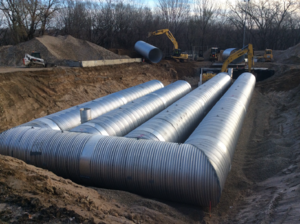 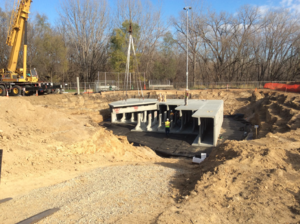 In fall of 2015, Capitol Region Watershed District (CRWD), in partnership with the City of Roseville and through two State of Minnesota grants, constructed a 60,000 cubic foot (450,000 gallon) underground stormwater infiltration system at Upper Villa Park in Roseville, Minnesota. The underground system was combined with a 13,000 cubic foot (100,000 gallon) modular concrete cistern to harvest and use stormwater for irrigation of a high-use softball field. The underground infiltration system was comprised of a TrueNorthSteel CMP (Corrugated Metal Pipe) Detention System. The construction project will protect water quality within Lake McCarrons, a high quality recreational lake within the urban core of the Twin Cities, and the Villa Park Wetland System by capturing stormwater runoff and filtering pollutants associated with urban stormwater, such as total phosphorus (TP), total suspended solids (TSS), heavy metals, and petroleum products.

In addition to removing approximately 45 pounds of TP annually, the system will save up to 1.3 million gallons of drinking water by capturing and using rainwater to irrigate the softball field in the park.

In order to determine the effectiveness of infiltration practice pollutant removal, three custom-built pan-lysimeter wells were installed. Samples will be extracted from the wells and tested for a suite of pollutants and bacteria to determine the fate of these constituents once they leave the infiltration system on their way to groundwater resources.

CRWD has operated an automated ISCO sampler at the outflow of this 250-acre subwatershed since 2014. CRWD will continue to assess the effectiveness of the system by monitoring inflow, bypass, and levels within both the cistern and pipe gallery, and will sample upstream and downstream of the system in 2016.

The goal of this project is to protect water quality within Lake McCarrons and the Villa Park Wetland System by reducing stormwater volumes and annually removing 45 pounds of phosphorus. Secondary goals are to reduce drinking water as an irrigation source, determine the pollutant removal and groundwater protection capacity of infiltrating into native sands, and to optimize volume reduction by utilizing real time controls based on weather forecasts. 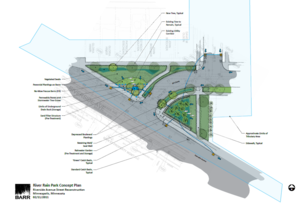 Schematic for the Riverside Stormwater Park. Click on image to enlarge. 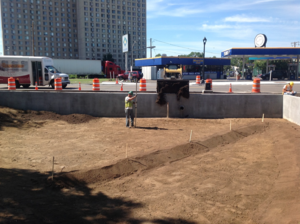 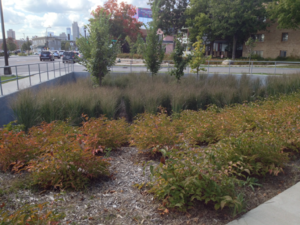 Finished basin with simple groupings of shrubs grasses and trees

The 8th Street infiltration basin was constructed at the intersection of Riverside Avenue and 8th Street where Riverside crossed at an angle, resulting in an awkward intersection and an unbuildable triangular piece of property. The intersection was redesigned to align 8th Street through the unused triangular property to create a standard perpendicular intersection. Bisecting the property allowed for the creation of two BMPs on either side of 8th Street. On one side there is a stormwater infiltration basin with a curved concrete retaining wall and railing. Trees and grasses were planted at the bottom while shrubs on the side slopes frame the basin. On the opposite side of 8th Street there is a plaza with permeable pavers over a stormwater tree trench system (modified Swedish tree trenches) consisting of layers of crushed stone and soil to provide stormwater storage and growing media for the trees. BMPs on both sides of 8th Street are connected with an equalizer pipe. A stone sitting bench completes the pedestrian-friendly plaza. The 8th Street BMPs are expected to capture and treat 0.5 inches of runoff from 2.2 acres of tributary area.

The goals of this green infrastructure project are: 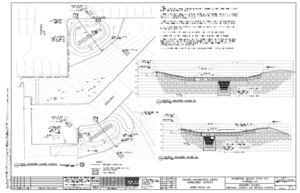 Plan and section view of the infiltration basin. Click on image to enlarge. 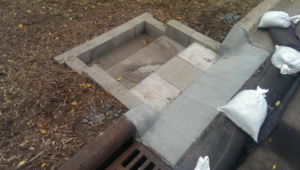 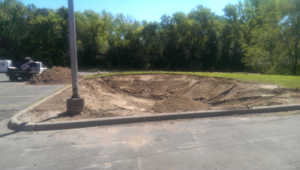 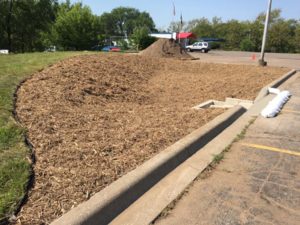 As part of a watershed properties study of commercial parcels begun in 2014, Ramsey-Washington Metro Watershed District identified green space adjacent to the parking lot of the Rosetown American Legion Post 542 in Roseville, Minnesota. An unused turf area was targeted for a commercially sized infiltration basin. Collaborating with the American Legion leadership, the project was constructed in 2015 as part of a series of BMPs identified during the initial watershed properties study.

For preconstruction investigations, an 18 foot soil boring was used to identify sandy gravel soils. There was no confining layer of less permeable subsoils identified. The basin was sized to collect the 1.1 inch storm event off the parking lot and surrounding sidewalks. The basin was graded to store water no deeper than 12 inches below the gutter flow line. The curb cut was positioned at the lowest possible downstream side of the curb. Surrounding slopes within the basin were designed to be no greater than 4:1.

Pretreatment for the infiltration basin is provided by a curb cut with a modular block step-down structure. Stormwater flows down the block steps and into a shallow sump feature akin to a small forebay. The energy of the stormwater is dissipated to prevent scouring or erosion while sediments are allowed to drop out for easy collection later. The pretreatment sump is not sized per current Stormwater Manual recommendations that the forebay be approximately 10 percent the size of the infiltration basin.

The infiltration basin cost $47,000, treats 1,100 cubic feet of stormwater and is estimated to remove 262 pounds of TSS and 0.57 pounds of dissolved P per year.

The Rosetown American Legion Post 542 infiltration basin has been included as one of several projects being maintained as part of the Ramsey-Washington Metro Watershed District BMP Maintenance Program. As part of the maintenance program, the site is inspected monthly during the growing season by a contractor. The site is assessed for any erosion, trash, weeds and sediment depths in the modular block splash block assemblies. The required time for crews to remove and dispose of materials is recorded and time and expenses are paid for. Contractor crews also look for any plant damage or soil conditions that would indicate slow drainage. Budgets for maintenance of the site are adjusted yearly.

In the spring, all the previous year’s vegetation from the perennials, sedges and grasses is removed and disposed of. The shrubs are pruned for proper form and to remove any dead branches. As mulch decomposes, its depth is refreshed to maintain approximately 3 inches of shredded hardwood mulch throughout the basin.