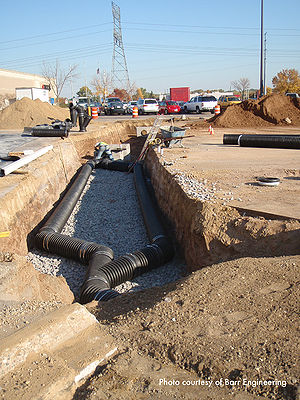 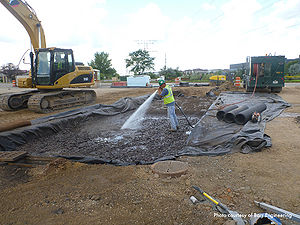 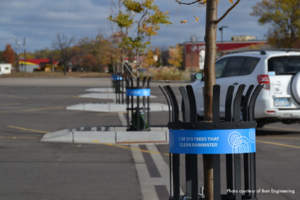 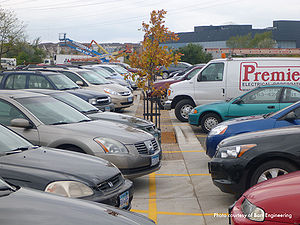 The Kohlman Lake TMDL (Total Maximum Daily Load) report calls for a 22 percent reduction in watershed loading of phosphorus. In response to the TMDL, the Maplewood Mall recently underwent a comprehensive redesign of its 35 acre parking lot. The four-phase construction process of this redesign took place between 2009 and 2012. This parking lot was designed by Barr Engineering Company on behalf of the Ramsey-Washington Metro Watershed District (who sponsored the project) and Simon Property Group (who owns Maplewood Mall). This redesign was completed with the intent of capturing one inch of runoff from 90 percent of the parking lot area, while reducing at least 90 percent of the sediment load and 60 percent of the phosphorus load leaving the site.

Approximately 820 cubic feet of soil/angular granite and clear angular granite was provided per tree on average. The average installed cost per tree using this method was $18,000. This cost includes soil treatment and all other aspects of the tree trench installation such as storm sewers, asphalt pavement profile, concrete curb, tree grates, cages, etc. The trees received supplemental watering via 15 gallon capacity gator bags for the first two years of growth. Following the two-year establishment period, the trees will only receive water from above and below during rainfall events. At the time of the writing of this case study, October 2013, the planted trees are in good to excellent condition. When initially planted, the tree canopy covered less than 1 percent of the site. After 20 years growth, the trees are projected to cover 17 percent of the site with canopy.

The designer stated that in future work using similar planting techniques they would modify their maintenance protocol to include biannual fertilization at the tree root ball for the first two years of growth (per the advice from the street tree specialists in Stockholm, Sweden) and use larger capacity gator bags to better facilitate watering during the first two years of growth.

The stormwater goals of this project were to

In 2011 and 2012, Barr Engineering Company worked with the Ramsey-Washington Metro Watershed District to develop a monitoring plan and to create an XPSWMM model to determine the reduction in runoff volume as a result of this project.

The following activities were planned for 2013.

At the time of this case study, the analysis of the data was still being completed and the monitoring report had not been released. 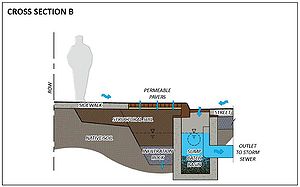 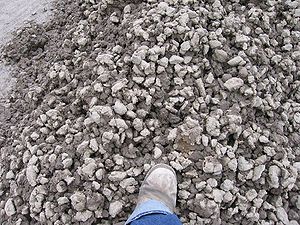 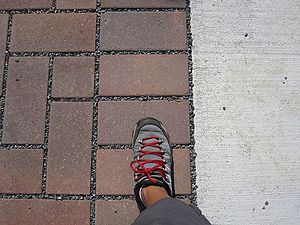 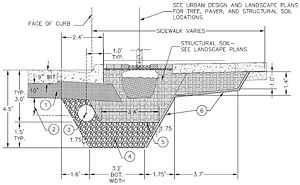 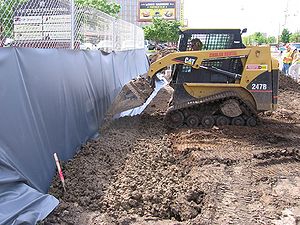 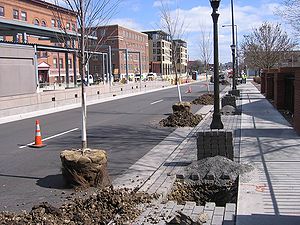 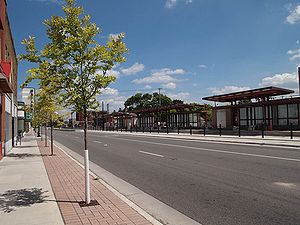 The Central Corridor Light Rail Transit (LRT) line is located within a highly-urbanized and heavily-paved corridor connecting downtown St. Paul and downtown Minneapolis. This corridor is made up of 111 acres of impervious surface. The stormwater runoff from the impervious surfaces ultimately drains to the Mississippi River via the municipal storm drain system and carries both sediment and pollutant loads to the river. Portions of the river are impaired for turbidity, nutrients, and bacteria.

As this project is located within the jurisdiction of the Capitol Region Watershed District (CRWD), it was required to comply with the CRWD's rules for stormwater management. These rules require that the site capture and retain the first inch of rainfall on site.

The goals of this green infrastructure project, including the integrated tree trench systems, are

It is estimated that the green infrastructure practices will reduce runoff volume by 3 acre feet per storm event and 102 acre-feet annually (which includes total storage volume within the tree trench systems, pavers, and CU Soils plus an estimated 0.15 inch reduction per square foot of canopy for a 20-year-old tree for each species). Estimated reductions in pollutants are 83 pounds for phosphorus and 15,134 pounds for TSS.

Monitoring occurs along the integrated tree trench systems and includes 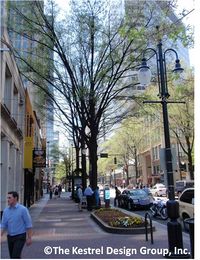 Planted in 1985, the Tryon Street Mall Trees are some of the oldest trees planted using suspended pavement. The pavement around the trees is held slightly above the soil by 3 foot tall underground pillars so that the soil under the pavement is not compacted beyond root-limiting densities by the pavement loads. In 2013, the willow oaks planted had an average diameter at breast height of 18 inches and an average height of 71 feet (Smiley, 2013). In addition to growing big trees, the system modeled a 10 percent reduction in peak flows (peak storm event) to the City’s stormwater system (EPA, 2013). As of 2013, almost 30 years after planting, the trees are flourishing. 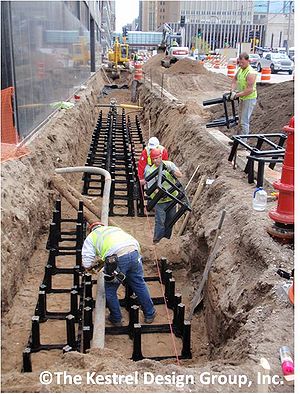 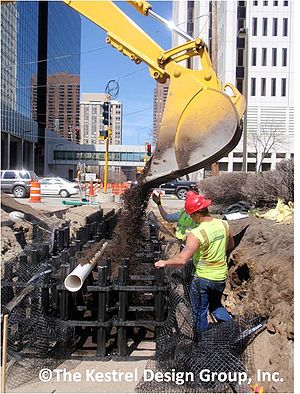 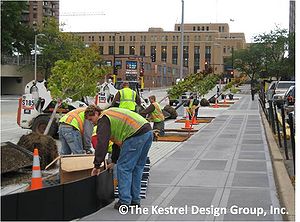 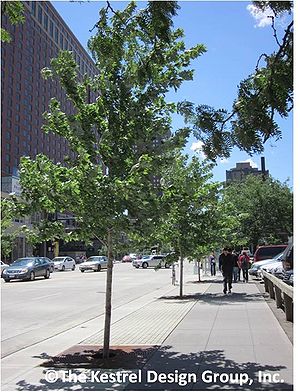 The MARQ2 project (Marquette Ave and 2nd Ave Busways) originated in response to the Minneapolis Ten Year Transportation Plan, to improve transit service by redefining lanes, lane widths, and sidewalk zones and widths. Stakeholders requested that healthy trees be part of the project.

To maximize the trees’ health, lifespan, as well as maximize stormwater and other ecological services, the designers maximized rootable soil volume for each tree using Silva Cells, a proprietary soil cell system that supports suspended pavement. Soil cells are modular structures that provide uncompacted soil volumes under paved surfaces and can support up to HS20 loading (US Standard Bridge Loading), making it possible to provide urban trees with large soil volumes even in urban areas with little open space. The uncompacted soil volume in soil cells can also be used for stormwater treatment, creating a bioretention system under paved surfaces. Using structural cells with bioretention soil, stormwater becomes an asset as a way to water the trees. The trees in turn will help cleanse and abstract storm water runoff.

The trees and soil cells in this project collect runoff from the sidewalks along 2 of Minneapolis’ main downtown streets (Marquette and 2nd Avenues) through pervious pavers that drain into the underlying structural cells. One of the soil cell groups also collects roof runoff from adjacent building scuppers.

While the amount of runoff treated per tree varies from block to block and from tree to tree, on average, each tree pit collects runoff from about a 300 square foot watershed. With 167 trees, this adds up to an estimated 50,118 square feet or 1.15 acres of sidewalk runoff captured. The loam soil in the structural cells has enough capacity to capture runoff from a 1 inch rain event from 5 times as much impervious surface as it currently captures. In other words, the soil in the structural cells has capacity to capture 1 inch of rain from 5.75 acres of impervious surface. The City of Minneapolis is reserving this extra soil stormwater holding and infiltration capacity for future routing of street runoff to the cells. As trees grow larger, they will also contribute to stormwater capture through interception and evapotranspiration. 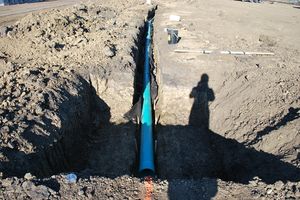 Stratacell system being installed for the Mills Woods Sports site, showing perforated pipe through base of the trench. Photo courtesy Citygreen. 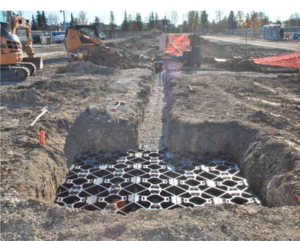 Stratacell system being installed for the Mills Woods Sports site, Showing the washed rock filled area for the filter/water storage system. The area in the forefront to be filled with soil for tree installation. Photo courtesy Citygreen.

A water harvesting project was conducted by the City of Edmonton at Mill Woods Sports site. This harvesting system has been designed to function as a passive recreation facility for a small lake which collects water and provides irrigation to the surrounding sports fields. The StrataCell® structural soil cell system was installed in a continuous trench along the centre of the south parking lot to provide a filter/storage system for runoff water and to provide soil volume for 6 trees installed within the matrix. The water runoff drains into the center of the parking lot through permeable surfacing, then filtered/stored within the StrataCell® system filled with washed rock. Once the water has filtered through the matrix, it reaches a perforated pipe which is tied into the storm sewer and transferred to the storm water lake located on the south-east side of the park. The perforated pipe continues beneath trees to transfer the water to the storm line.

Project Summary: The Garrison Concourse Overlook Site Restoration and ADA Improvement Project directs runoff from the access road to a center island/historic interpretive area through ADA curb cuts that also double up as stormwater curb cuts. Turf in the interpretive area is planted into an 80 percent sand/20 percent compost bioretention soil mix. Trees are planted into this area in MnDOT select topsoil borrow that extends to a 5 foot radius from each tree trunk. A 6 inch deep fine filter aggregate layer that spans under the bioretention soil and topsoil borrow provides for drainage to the underdrain, which is wrapped in coarse filter aggregate.