Given adequate growing medium depth and irrigation, just about any plants, even trees, can be grown on green roofs. The plant list discussions below pertain to extensive green roofs.

Species included on the plant lists below may not be appropriate for all projects. Suitability can vary with climate, microclimate, project goals, and maintenance budget. Many of these green roof species have not yet been tested in all of Minnesota. While a considerable number of green roofs have been installed in the Twin Cities area, few green roofs have been installed to date in more northern parts of Minnesota that have a harsh climate that will be challenging for green roof vegetation. The section on design criteria for green roofs provides guidance on factors that affect green roof plant selection.

Growing sedums and other succulent plants on green roofs 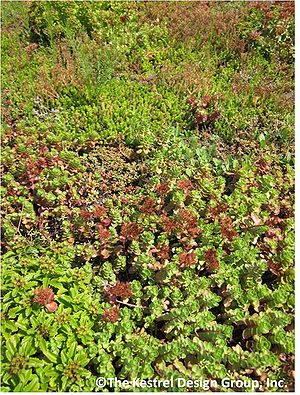 Sedums and other succulent plants are often used on green roofs because they are tolerant of the dry conditions found on most roofs. For example, Durhman et al (2006) found some Sedum species could survive and maintain active photosynthetic metabolism even after 4 months without water. A few of the hardiest sedum species for Minnesota are listed below, but these are only a very small portion of the huge palette of Sedums available on the market. Longer lists of succulents available for green roofs, are available, for example, in 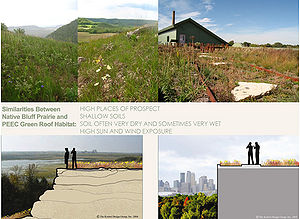 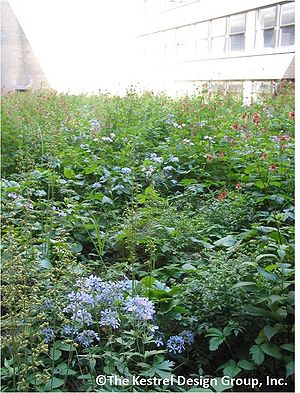 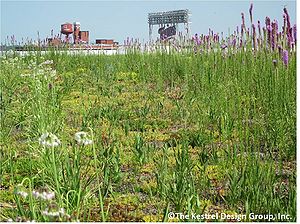 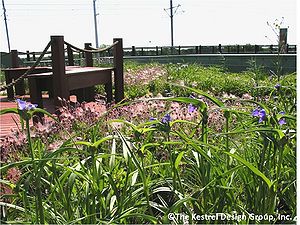 Many species found in Minnesota’s bedrock bluff prairies have also been found to grow well on Minnesota’s green roofs. Bedrock bluff prairies have thin soil layers over bedrock and are often found along river bluffs. Plants growing in bedrock bluff prairies are adapted to growing conditions very similar to those found on many green roofs, including thin growing medium and high exposure to wind, sun and drought. Use of native prairie species on green roofs is controversial because most prairie species survive droughts by sending roots very deep into the soil to access water. The shallow growing medium of green roofs does not allow for such deep root growth. However, anecdotal observations in Minnesota, Michigan, Chicago IL and Lincoln NE, suggest that deep rooted native prairie species grow their roots horizontally on green roofs (Kestrel Design Group (2013), Sutton (2011), Grese (2008)).

Many of the species listed in the above table, as well as many additional native species not listed, are also thriving on other Midwestern extensive green roofs, including, for example, Chicago City Hall (Dvorak and Carroll 2008, Carroll 2013), Chicago Botanic Gardens trial green roofs (Hawke 2013), and several other green roofs in Chicago, Toronto, and Lincoln NE. The Chicago City Hall green roof, installed in 2001, had 200 species as of 2012, most of which are natives. Its plants are grown in varying depths of soil (some extensive and some intensive), and regularly irrigated (Dvorak and Carroll, 2008). The Chicago Botanic Garden has 2 trial green roofs, installed in 2009, one of which is planted with natives. It includes planting depths of 4 inches, 6 inches and 8 inches of growing medium. Aiming to minimize green roof maintenance, the roofs have been watered only during extreme drought (beyond establishment), including once in 2011 and once in 2012 (Sutton et al 2012). 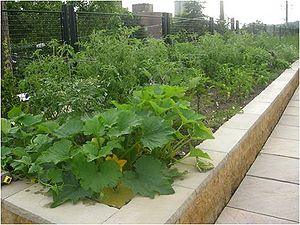 Many vegetables and herbs also thrive on green roofs, many in growing medium as little as four inches deep, including herbs, tomatoes, peppers, and lettuce. Because they are annuals, vegetables require considerably more maintenance than other extensive green roof plants. If they are fertilized, they will likely increase nutrient content of runoff from the roof, so they may not be ideal for stormwater projects where leaching of nutrients is a concern. If all runoff from the green roof is harvested and re-used on the roof, fertilization will not affect down stream water bodies.

Aside from growing food in a built-in-place green roof, food can also be grown in containers or hydroponically on a green roof, or on a green or living wall.

Several on-line references provide more detail about rooftop agriculture, including, for example, Guide to Setting Up Your Own Edible Rooftop Garden, published by Alternatives and the Rooftop Garden Project (2008).

Other recent publications on rooftop agriculture include