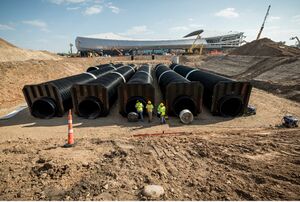 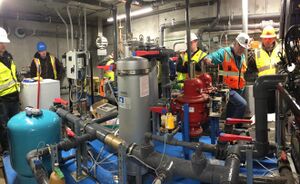 Completed in 2019, The Allianz Field in Saint Paul is home to the Minnesota United Soccer Team. Through a partnership between the City of Saint Paul, the Minnesota United FC, RK Midway, and the Capitol Region Watershed District (CRWD), the stadium was designed with multiple “shared, stacked green infrastructure” (SSGI) to collect, treat, and reuse stormwater from this area and protect the nearby Mississippi River from stormwater pollution. The City of Saint Paul defines SSGI as:

“… “shared, stacked green infrastructure” (SSGI) describes an approach to handling stormwater that leverages funds spent on stormwater management to achieve multiple benefits. “Shared” means that stormwater from both public rights-of way and private development sites is treated in the same system. “Stacked” means that the stormwater facility has two functions: treatment of stormwater and provision of passive green space. “Green infrastructure” refers to the use of plants and soil to filter stormwater and promote infiltration of water into the ground. These elements are in contrast to the more traditional approach to stormwater management, which treats parcels individually, and relies on curbs, gutters, and underground tanks and pipes to collect and rapidly convey stormwater away.” 1

The soccer stadium uses reclaimed water from rooftop runoff to irrigate trees and green spaces around the stadium. Rain and snowmelt from the roof of Allianz Field is captured and routed through a pretreatment system consisting of hydrodynamic separators and a pretreatment wet pool to remove pollutants such as total suspended solids (TSS), hydrocarbons, and trash. After the pretreatment, water is directed to a 675,000 gallon storage tank. This storage tank was designed to also accept rain and snowmelt from the roofs of future nearby development. The rain and snowmelt water is filtered through three different sets of filters and also treated by both ozone and UV light. The level of treatment satisfies Minnesota state plumbing code water quality standards allowing for indoor use of harvested rainwater, so this water can be used not only for irrigation, but also for washing laundry and flushing toilets. The recycled water is currently used for irrigating the nearby Great Lawn and over 200 mature trees, but can also support future development and businesses around the stadium. This system is expected to conserve upwards of 2 million gallons of potable water per year, and will keep millions of gallons of stormwater runoff out of the Mississippi River and other nearby water bodies every year. It includes a smart hub that monitors, analyzes, and treats the stormwater, and reads weather forecasts to predict rainfall and adjust water levels inside the storage tank accordingly.

Tree trenches and rain gardens were also included in the design of Allianz Field to retain and filter stormwater runoff from surrounding streets and sidewalks, as well as rain gardens to retain and filter stormwater runoff from nearby parking lots. The tree trenches use an engineered gravel and soil mixture to filter and store stormwater and snowmelt. 120 of the 192 trees on site are planted in tree trenches and together they capture and filter an average of 900,000 gallons of stormwater runoff each year. The trees are also irrigated by the reuse system during periods of dry weather. The rain gardens include a media filtration system to treat runoff and pollutants generated by the large parking lots, and provide visible evidence of stormwater management on site. This filtration system removes 80% of TSS from the parking lot annually, as well as total phosphorus and heavy metals.

Total Drainage Area: The drainage area of the rainwater capture and reuse system currently includes the 3.5 acre rooftop of Allianz Field, but in the future could expand to include 13 acres of future development rooftop.

Access: The tree trenches and rain gardens are publicly accessible. The rainwater capture and reuse system is not.
Special Design Features: The rainwater and reuse system includes filtration and disinfection of the water, providing a level of treatment that satisfies Minnesota state plumbing code water quality standards allowing for indoor use of harvested rainwater. The system also includes a smart hub system that monitors, analyzes, and treats the stormwater, and reads weather forecasts to predict rainfall and adjust water levels inside the storage tank accordingly.
Noteable Challenges: The site is located on a brownfield where nearly 50% of the area was contaminated. This made the rainwater capture and reuse system particularly attractive, as this system intercepts rainwater and stormwater before it touches the grounds.
Other Benefits: The numerous trees on site improve air quality, and reduce air temperature and urban heat island effect.