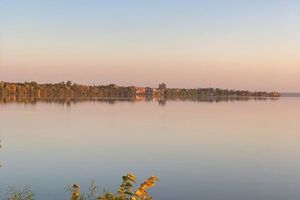 Photo of Lake Bemidji. Bemidji State University
Information: This page was created for the original Stormwater Manual in 2005. Information may be outdated.

Lake Bemidji is a large recreational lake and popular tourist destination for visitors statewide. As such, maintaining the water quality in the lake has important economic ramifications for the region. Outdated stormwater treatment facilities routed stormwater from the City of Bemidji and surrounding areas directly into the lake without treatment, increasing nutrient and sediment levels and threatening water quality. Increasing population and development in the lake’s watershed have added other pressures to the lake ecosystem.

Lake Bemidji is a large 6,500-acre mesotrophic located in the Northern Lakes and Forests Ecoregion. The Mississippi River enters Lake Bemidji along the southern shore after flowing through Lake Irving, a shallow 620-acre, eutrophic just upstream. Land use within the 400,000-acre watershed is quite diverse with 65 percent forested, 13 percent open water and wetland, 18 percent pasture and cultivated land and 2 percent urban residential. Population within the Bemidji city limits has remained relatively steady over the last few years, but there has been substantial population growth in the townships surrounding Bemidji, a trend that is expected to continue.

The Phase I Lake Bemidji Watershed Study was conducted from 1989 to 1990 and as a result the Lake Bemidji Watershed Management Project (LBWMP) was initiated. The LBWMP is a Clean Water Partnership project with the Minnesota Pollution Control Agency and over 20 other cooperating agencies and groups. The conclusions of the year-long study indicated that water quality in Lake Bemidji was good but nutrient levels, particularly phosphorus, were just below the level where nuisance algae blooms would begin to occur. The Steering Committee for the LBWMP identified seven areas of primary concern within the watershed including urban runoff. Using grant dollars and local contributions, the City looked at retrofitting existing stormwatersheds to provide some level of treatment for phosphorus and sediment and also began adopting stormwater management strategies that were more appropriate for growing areas of the city.

One of the centerpieces of the LBWMP was the construction of the Cameron Park Stormwater Control Project. Sediments had formed a delta, which extended nearly 100 feet into the lake, extending from the stormwater outfall located near the popular park. The Park Commission as well as the city council carefully weighed the potential uses of the area proposed for the facility. Recreational open space and public facilities along the shore of Lake Bemidji are at a premium but the decision was ultimately made that long-term protection of the lake required using some of this land for stormwater management. Construction began in August of 1993.

The stormwater control complex consists of a two-chamber wet detention pond system with an energy dissipater at the inlet to the first basin. Stormwater flows through the first basin where larger sand particles settle out. It then flows over an earthen berm spillway into the second basin of the system and through an outlet structure leading to Lake Bemidji. The basins were sized to treat the “first flush”, which contains the highest concentration of pollutants and sediments, and fully contain a 24-hour rainstorm of approximately 1.9 inches from the 140-acre subwatershed of Bemidji. Also installed in 1993 was an in-line sediment trap placed on a storm sewer, which drains approximately 40 acres of the downtown Bemidji area.

As mitigation for wetland impacts associated with this project, a restoration/enhancement of a wetland area on the campus of the Bemidji Middle School also had ancillary stormwater benefits. This area treats runoff from the Middle School campus and other upstream areas including an area of commercial development which includes a large retail operation along Paul Bunyan Drive. This project restored wetland functions through installation of water control structure in a ditch draining the wetland and provided a more diverse wetland environment for students.

In 1995, the city of Bemidji installed a stormwater treatment system as an integral part of a reconstruction project at the new Tourist Information Center. This project collects and treats stormwater from 2 subwatersheds, totaling approximately 16 acres of major transportation and commercial land uses that had discharged directly into Lake Bemidji. A combination of techniques was used in the system, which incorporates wet ponding, an aeration fountain which also acts as a visual amenity to the site, and plantings with native vegetation tolerant to stormwater fluctuations.

In 1996, the City completed an updated comprehensive plan that included stormwater management strategies. These included adopting a policy that required newly developing areas to retain 75 percent of the runoff from a 10-year storm event on site before any discharge is allowed into the municipal stormwater system. This policy was first implemented when an 80-acre area of retail and commercial development began construction on the west side of the city. In this area, on-site stormwater detention discharge through a conveyance system that runs through a series of three wetland treatment basins constructed on city-owned property before discharging through the Middle School wetland complex and ultimately to Lake Irving.

In 1997 the City of Bemidji installed a set of treatment basins in Diamond Point Park. These basins treat stormwater from 2 subwatersheds of approximately 30 acres and 110 acres respectively. The area available was limited by several factors including the lake, street and surrounding park trees. There was a strong sense that the basins had to be integrated into the park landscape. A large (about 1.5 acre) parking lot had its runoff redirected from the storm sewer system to discharge along the edge of the athletic fields.

Stormwater treatment has been integrated into other highway and residential street reconstruction projects around Bemidji, this includes implementation of a stormwater utility for the City. Two transportation projects that were begun in 2000 and 2001 also integrated stormwater management. Runoff from the major transportation corridor along the south shore will direct small event and the first flush of stormwater to a treatment basin constructed along the shore of Lake Irving. A residential street construction project along Lake Bemidji incorporated a proprietary stormwater treatment product into the project.

A public education campaign has been an integral part in the City’s stormwater management efforts. Information and education about urban runoff has centered around the construction of stormwater facilities by the City. News articles, newsletters and public service announcements have been used to provide a general background to citizens about urban runoff. Presentations have been given to a wide variety of audiences ranging from school children to Bemidji State University students to service clubs and citizen’s groups around Bemidji using a tabletop stormwater model. In addition to the general information provided, the LBWMP participated in a project with the Minnesota Extension Service, Minnesota Board of Water and Soil Resources, the City of Bemidji and several Girl Scout troops in the area. In this project, the Girl Scouts stenciled stormwater inlets to remind citizens that the storm drains led directly to Lakes Irving and Bemidji and talked with homeowners about the effects of urban runoff.

In Cameron Park, in order to utilize the high visibility of the site for educational purposes, signs were installed explaining some of the sources of urban runoff pollution and how this stormwater treatment system is protecting Lake Bemidji. Approximately 30,000 visitors stop in annually at the Tourist Information Center, many of them stroll around the basin that has been planted with native vegetation and landscaped to enhance appearance and attract visitor attention. A series of signs informs visitors to the area about stormwater pollution and the treatment taking place in this basin. Continuing studies and monitoring of the systems are made possible through cooperation with Bemidji State University researchers, local schools and community groups such as 4-H.

Preliminary data indicated that approximately 80 to 100 cubic yards of material (sediment and other debris) were trapped in the initial basin during the first 2 years of operation. Approximately 3 inches of material were deposited over the bottom of the forebay basin during the first year of operation. This fits well with the initial estimates of sediment clean-out in the forebay at approximately 5 to 10 year intervals depending on deposition rates. The in-line sediment trap also trapped over 70 cubic yards of sediment within the first 2 years of operation.

Further monitoring of this system took place in 1998 and 1999. Effectiveness was measured in two different ways. In one study, flow volumes into and out of the basin were measured and water quality samples were taken. Total phosphorus and sediment loading rates were calculated from this information. During the monitoring period, there were only three storm events that were large enough to discharge to Lake Bemidji.

Research conducted as a master’s thesis by a Bemidji State University student indicated that this basin removes approximately 66 percent of the total phosphorus contained in the stormwater.

Available upon request for specific projects.

The city has had very good success in combining its retrofit projects within a larger framework of stormwater management which includes planning and public outreach and education. The city will continue to follow this successful model for future projects.