The Minnesota Stormwater General Construction Permit requires that the first 1-inch of stormwater runoff be managed on site for development projects that add 1-acre or more of impervious surface. The most common approach is to infiltrate the runoff through a bioinfiltration basin or similar Best Management Practice (BMP). However the installation of infiltration BMPs at Brownfields, Leaking Underground Storage Tank (LUST), and other environmentally impacted commercial and industrial sites is not allowed where the infiltrated runoff could come into contact with and mobilize contaminants in soil or groundwater. The following case studies describe redevelopment projects where infiltration systems were successfully installed at sites where contaminated soils or groundwater existed. The two most common approaches include siting the infiltration system in an area of clean soils, or fully removing all contaminated soils in and around the infiltration device. In all cases, additional testing of the soils in the infiltration area was conducted before construction, permissions were given by the MPCA, and construction field screening was performed to confirm that the infiltration site was clear of contaminants. 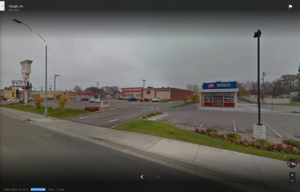 CVS Pharmacy opened a new store located at the intersection of West Division Street and 25th Avenue South in St. Cloud. The project combined five small parcels previously occupied by two restaurants, two residences, and an auto repair and parts store. Site plans developed for the project included construction of the new CVS building, relocation of one of the restaurants to the southerly portion of the site, and construction of parking for both buildings. The plans proposed four stormwater infiltration BMPs be installed, three of which as surface infiltration basins and the fourth as an underground StormTech infiltration vault.

Soil contamination concerns focused on the auto repair parcel, which previously had contained a fueling area. In 2001, the fueling area had a known leaking underground storage tank. Investigations concluded that contamination was limited to the areas surrounding the underground tanks. Remediation of the soils was completed under the MPCA LUST program. It was determined that the contaminants had not migrated off-site. The LUST program approved a site closure recommendation in 2003.

A Development Response Action Plan was prepared in 2012 which recommended that the fill below the CVS building be removed and properly disposed or reused on site. Three pollutant hotspots found to contain elevated levels of lead and arsenic were also to be fully excavated and the soils disposed. Any contaminated materials found during utility excavation or general site grading were also to be removed and properly disposed. As a condition of approval of the Development Response Action Plan, the MPCA stipulated that the soils below the stormwater infiltration basin located within the auto repair parcel could not exceed MPCAs Soil Leaching Values (SLVs) for the contaminants of concern.

Soil investigations were not conducted at specific locations proposed for stormwater infiltration.

A review of the Phase II investigation that was conducted while the infiltration system was in design found that there were no borings or samples conducted at the exact location of the stormwater BMPs. Concerns were raised by the City of St. Cloud and the MPCA stormwater group, who requested additional soil samples for all of the infiltration BMP locations to ensure that the infiltrated runoff would not come into contact with any contaminated soils. Three test pits were dug at each of the four infiltration areas and samples of soils tested for the contaminants of concern. Low levels of RCRA metals were discovered n the samples, all of which were below MPCA standards for SLVs and Soil Reference Values (SRVs) except for one. Selenium was found in higher concentrations at one of the infiltration sites. To facilitate infiltration, all of the soil below the infiltration BMPs were excavated to a depth where the native granular material was found. The excavated areas were backfilled with clean granular material. Much of the excavated materials was reused on site. Excavated soils that were determined to be unsuitable for reuse were properly disposed.

The project was completed in 2013. 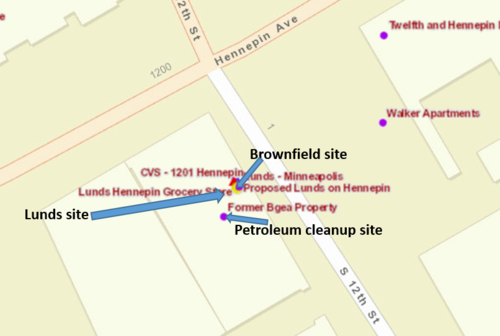 Lunds opened a grocery store in 2012 on what was a brownfield site in downtown Minneapolis. Originally the parcels at this site contained residential structures constructed in the 1880s. Residential uses continued until the first commercial buildings were constructed in the 1920s. The commercial operations since that time included an auto dealership and an electrical parts supplier. Additionally, a dry cleaner was also once operating adjacent to the site.

Environmental investigations began in 2003. It was suspected that there was potential petroleum and/or hazardous materials contamination from the historic operations of the automotive facility and adjacent dry cleaning facility. There was also documentation of known contamination of upgradient groundwater from a separate site. Phase I and subsequent investigations concluded that both petroleum and non-petroleum contaminants were present:

The soil borings showed that the fill material on the site consisted primarily of silty sand embedded with layers of silt. No groundwater was found to the boring depths of 25 feet.

Lunds had established a goal of meeting LEED requirements, which included stormwater management goals that fully manages the runoff from a 1.25-inch rainfall, amounting to 4,138 cubic feet of runoff volume. Features of the stormwater facilities include:

The infiltration wells are surrounded by coarse aggregate to a depth of 12 feet below the surface elevation. Two of the wells are connected with 1-foot diameter perforated pipe for additional infiltration capacity. It was determined that the infiltration sump structures met the definition of an injection well per the USEPA Class V Injection Control Program. The wells were registered with the USEPA prior to construction of the infiltration system. Field screening was performed during excavation in accordance with MPCA requirements. Soils in the two areas identified with excessive contamination were removed and disposed in a landfill. Clean soils were imported as fill and capped within the bituminous parking lot. 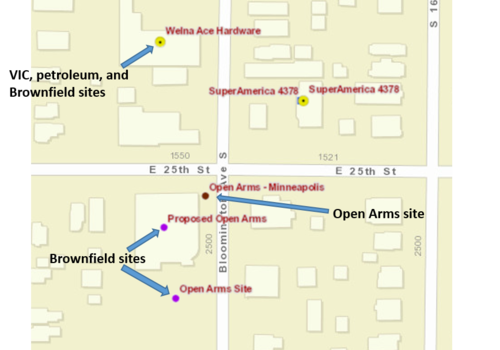 Open Arms is a non-profit organization that cooks and delivers meals free-of-charge to people suffering from chronic illness. In 2007, Open Arms purchased eight parcels in a residential/commercial neighborhood of Minneapolis for the purpose of constructing a new building to house their kitchens, offices, and storage, plus a parking lot large enough to accommodate volunteer parking and the loading/unloading of supplies.

The 0.8 acre site has been developed since the late 1800s. The three north-eastern most parcels were commercial operations, while the remaining parcels contained single family residential houses. Records show that the commercial operations included a machine shop, auto repair shop and a sign painting shop. Environmental investigations conducted in 2006 through 2008 determined that three of the eight parcels contained contaminated soils:

The City’s Zoning Code required that parking areas should be designed with wheel stops in lieu of curbing to encourage infiltration of runoff. There was a concern that the runoff from the parking areas would flow to neighboring residential properties. Therefore, the Conditional Use Permit issued by the City allowed continuous curbing, but included a statement that encouraged onsite retention and filtration of the parking lot runoff. Designers proposed that the runoff from the parking lot and rooftop be collected into a 72-inch diameter perforated pipe, 95-feet in length. Runoff that is contained in the pipe is designed to infiltrate through stone bedding into the subsoil. Excess runoff discharges to the City storm sewer system.

A supplemental round of sampling was conducted after it was determined that the stormwater management proposal was to install a below ground infiltration system. The supplemental sampling was to assure that the infiltrated runoff did not migrate into any contaminated soils. Three soil samples were collected from below the invert of the underground infiltration tank. Three test pits were excavated and samples were collected to a depth of 10 feet below the surface. Contaminants were not found in the samples, nor DRO or PAH levels above the laboratory reporting limits. RCRA metals were found to be within the range naturally found in the soils in the area. Additional observations during excavation found no evidence of contaminated soils.

The project was funded in part by a remediation grant from the Hennepin County Environmental Response Fund in 2008. The project was completed in 2010. 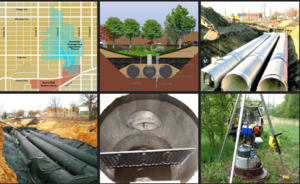 In 2008 and 2009, the St. Paul Port Authority (SPPA) purchased nine parcels of property from the 3M Company (3M) located along Minnehaha Avenue and East 7th Street in St. Paul. The 46-acre site is the original campus for 3M, operating from 1910 through 1962. The SPPA obtained the properties for the purpose of preparing the site for redevelopment, with a long-term vision of green redevelopment and environmentally sustainable businesses. Parcel 5, the northern-most parcel, is nearly 16 acres in size. The parcel included a lumber company and an iron company before being obtained by 3M. 3M used the parcel as a machine shop, fabrication area, and for bulk petroleum storage. Environmental investigations discovered contaminated fill in five areas of the parcel. The contamination was found in the soils to depths of 12 feet. Contaminants included RCRA metals, DROs, PAHs, and VOCs. PAHs, lead, arsenic, and iron concentrations exceeded Tier II SRV standards for industrial use. DROs exceeded MPCA standards. Low levels of VOCs and metals were found in the groundwater, with arsenic exceeding state standards.

SPPA initiated a project in 2010 to clean-up and prepare Parcel 5 for redevelopment. The project involved building demolition, removal/disposal of contaminated soils at the five identified hot-spots, upgrade of utilities, construction of a new street, and construction of a stormwater infiltration system. It was determined that the stormwater system could be a regional system, with capacity to treat runoff from an upstream 163-acre residential area in addition to the runoff from the redevelopment site. Runoff from the area, including both the redevelopment area and the upstream residential area, drains to the Mississippi River via the Phalen Creek storm tunnel, which is located in the adjacent Phalen Parkway.

The completed project has won a number of awards, including:

The Green Line Light Rail Transit (LRT), also called the Central Corridor LRT, began operation between downtown Minneapolis and downtown St. Paul in 2012. The segment of the project that is highlighted in this case study is called the Civil West Construction Segment. Specifically, this segment is the portion of the route in Minneapolis that passes through the University of Minnesota and a historically industrial area between the University of Minnesota and St. Paul. Extensive environmental investigations were conducted along the route and multiple areas of contamination were identified that were remediated during construction. The most common pollutants included DROs, GROs, petroleum related VOCs, PAHs, metals, and debris. Subsurface construction, including utility construction and soil corrections/removals was conducted in 2010 and 2011. Soils were monitored during excavation and were field screened to ensure all contaminated soils were removed and properly disposed.

The Metropolitan Council, as owner of the LRT system, was not willing to accept these conditions and the infiltration system on Washington Avenue at Walnut Street was not installed. During construction a minor quantity of concrete debris was encountered, representing approximately 1% of the excavated volume. No additional signs of contamination were found. The soils were excavated and disposed off-site. The infiltration system was installed as proposed.