The City of Wykoff is located in a karst area (underlain with limestone with less than 50 feet of unconsolidated material over it). There are a large number of sinkholes in the area. Historically the city used sinkholes as its stormwater receptors, with storm sewers outletting directly into four sinkholes in the center, to the east and to the west of town. The sinkholes directly accessed the groundwater in the area and potential for contamination of surface and groundwater resources was very high. 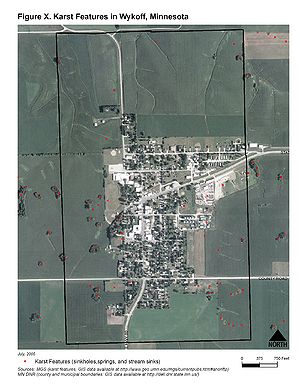 The City of Wykoff is located in western Fillmore County. From 1992-1994, the County Geologic Atlas was created by the Minnesota Department of Natural Resources (DNR) and the Minnesota Geological Survey (MGS). This project included several dye tracing studies in the Wykoff area. Studies indicated that dye traveled rapidly through the karst features and emerged through springs which fed the nearby trout streams of Mahoods Creek, Watson Creek and Spring Valley Creek. DNR Waters and University of Minnesota Geology Deptartment staff did two additional dye traces from stormwater receptor sinkholes to demonstrate the connection between them and the springs on Mahood’s Creek and allow for future monitoring. 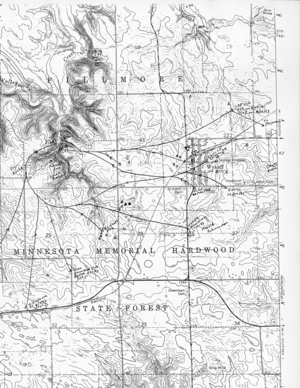 In the late 1990’s the city began to move forward with the idea of upgrading their water, sewer, and stormwater systems. The city applied for but did not receive grant funding for a total upgrade of all street and storm sewer systems. A variety of options were considered for addressing stormwater discharge into the sinkholes. Several state and local agencies including the Fillmore Soil and Water Conservation District SWCD, the City of Wykoff, the Natural Resource Conservation Service (NRCS), the DNR, the Minnesota Pollution Control Agency (MPCA), the Board of Water and Soil Resources (BWSR), and the University of Minnesota all cooperated on various phases of this project, which resulted in four sinkholes being modified.

City funds were available to reconstruct stormsewer and upgrade streets in the western part of town that discharged into a buried sinkhole to the south of town. As part of this reconstruction and upgrade, the system was engineered so that only local surface flow was routed to this sinkhole. Gutter and stormsewer flow were diverted away from this sinkhole and treatment provided elsewhere.

In the east part of town, the Fillmore SWCD received BWSR funding to address the issues in this sinkhole which received approximately 1/3 of the city’s stormwater. It was in an area that was frequently used as an illegal dump site for demolition material and other refuse and also received direct runoff from a nearby trucking company, so there was a high possibility for contamination.

First, the dumped material was removed from the site and disposed of properly at a landfill. The sinkhole was then excavated down to the bedrock opening. The sinkhole was sealed by placing layers of progressively smaller rock and filter cloth over the swallow hole. The area was then backfilled and graded allowing for installation of a grassed waterway. Stormwater was redirected across the sinkhole to this grassed waterway and conveyed away from the city. Discharge flow is filtered through the vegetation and dispersed over the area to allow for infiltration. A second sinkhole is located ½ mile away from the sealed sinkhole and may receive some of this redirected water. However, the filtering treatment that the water will receive from overland flow through vegetation will greatly reduce or eliminate pollutant levels entering this second sinkhole. Best Management Practices were applied in the watershed to reduce stormwater runoff contamination before it reached the discharge point. These BMPs included an educational campaign and involvement of civic groups like the local 4-H which did storm drain stenciling.

In the far west part of town, the situation was more complicated and a variety of options were explored. The City received a grant from the DNR to partially cover the design and implementation of the remedial measures. The engineering firm WHKS designed a system to re-route stormwater away from the sinkhole into a swale that flows out of town. However, the sinkhole still received overland flow so some treatment was still necessary.

To treat this overland flow, the sinkhole was excavated down to the opening in the bedrock. A perforated inlet pipe wrapped with filter cloth was positioned over the bedrock opening with large diameter rock placed around it. The excavation was then backfilled with smaller diameter rock and pea gravel. The pipe was in place to allow water that flowed into the sinkhole to be routed into the bedrock opening after it passed through the rock and filter cloth. 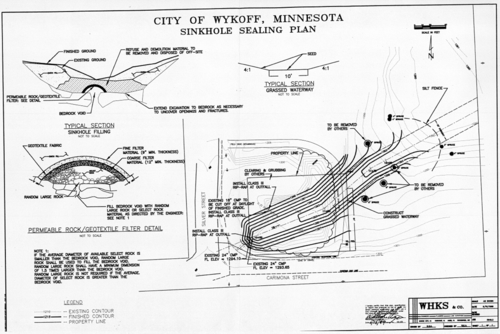 Total cost for all aspects of the project was approximately $47,700, half of which was born by the city and the other half paid for by a Department of Natural Resources Conservation Partners Grant and a Board of Water Resources grant.

Water quality monitoring will continue. Trends in water quality will be evaluated and are expected to show signs of improvement. Waterways and sinkhole areas are being monitored to ensure proper maintenance of the waterway and avoid redevelopment of the sinkhole due to ponded water or erosion.