The purpose of this section is to provide step-by-step examples on how to fill out the three required tabs in the TMDL Form. These are the BMP-Activites completed tab, the Cumulative reductions tab, and the Adaptive management strategy tab. The Permittee is not required to report on every BMP/activity that has been implemented, but instead just on those BMP/activities that are being applied to applicable WLAs. Please read overview of categories before continuing on with the examples.

In order to complete the TMDL reporting form, it is important that the permittee have a means to:

This information is provided in the figures we will be referring to throughout each example. The subsequent sections will demonstrate how to take that information and translate it to the TMDL reporting form. 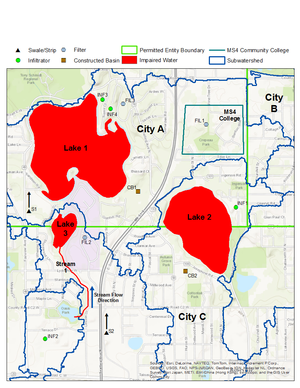 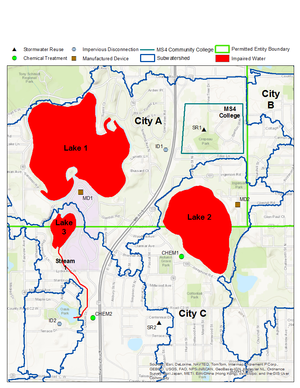 The example covers a metro area TMDL, the Metroshed WRAPS, with four MS4 permittees (City A, City B, City C, and MS4 College) and four impaired waters. The following TMDLs have been completed to address these impairments:

Information: Note: For the sake of the example, we will assume the baseline year for each of the five TMDLs is 2010.
Information: In the Annual Report Form, TMDL WLAs are expressed differently depending on the type of receiving water.

City A has been assigned WLA for three of the five TMDLs included in the Metroshed WRAPS project, the Lake 1: Phosphorus, Lake 2: Phosphorus, and Lake 3: Phosphorus TMDLs. As noted in the previous section, the baseline year for each TMDL is 2010. Since the baseline, City A has implemented 14 BMP/activities that can be credited as progress toward achieving an applicable WLA. Note that all 14 BMP/activites "do not" apply to each TMDL WLA. Table 1 illustrates which TMDL each BMP can be credited to and in what category.