What is a large watershed TMDL study?

Large-watershed TMDLs have the following characteristics.

Why is this guidance needed?

Large watershed TMDL studies pose concerns about equity. MS4s comprise a small percent of total loading to the impaired water and meeting the WLA would have a small impact on the receiving water. Nevertheless, regulated MS4s must comply with the permit, which requires them to meet the TMDL WLA. The same is not true for sectors included in the Load Allocation (LA). For a TMDL with a very large required reduction, regulated MS4s may be required to meet the reduction while other sectors are not required to make progress. The solution to this dilemma is a phased approach for the TMDL. 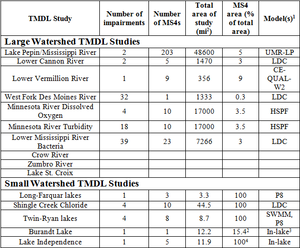 Summary of some large- and small-watershed TMDL studies. 1 LDC = Load Duration Curve; UMR-LP = Upper Mississippi River-Lake Pepin; 2 Using local land use plans, the projected MS4 area is more than 50% of the watershed; 3 Watershed modeling was not conducted. In-lake model(s) was calibrated to monitoring data; 4 The entire watershed is regulated MS4, but only about 10 percent of the watershed is currently. developed

The diversity of MS4s in most large watersheds and the lack of information needed to guide implementation make it nearly impossible to identify specific implementation activities. One way to overcome this is to select generic BMPs that apply to all MS4s in a study area.

This guidance provides conditions for a phased TMDL and the BMPs needed to meet the WLA. 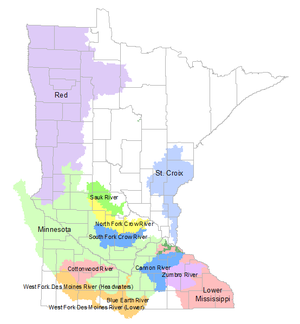 This section provides the basis for estimating the MS4 WLA, defining the TMDL implementation phases, selecting appropriate BMPs, and linking the BMPs to the MS4 permit.

WLAs for large-watershed studies should be categorical (include all MS4s into a single WLA). All MS4s should be treated equally in the calculation. This means loads for all MS4s are calculated using the same method with the same assumptions and model inputs. Some examples are provided below.

There are two primary difficulties for estimating the MS4 contribution. The first is selecting the areas that represent urban. Below is a recommended procedure.

A second concern is addressing future growth. There are several ways to address future growth in large watershed TMDLs.

The allocation section of the TMDL report should express the WLA as a required reduction, typically as a percent. The baseline for the reduction must be specified. The baseline is the year from which an MS4 will judge progress toward the WLA. The baseline may reflect other conditions, such as the BMPs that can or cannot be applied toward the WLA. An example is a baseline of 1988 and no BMPs in place for the Minnesota River Dissolved Oxygen TMDL.

When the magnitude of required reductions exceeds 50 percent, implementation for large-watershed TMDL studies should be phased. Three tiers or phases are recommended.

The three phases described above correspond with TMDL evaluation points. All sectors are expected to achieve their target reductions within reasonable time frames (e.g. at the end of each phase) and assume both voluntary and permit compliance. If one sector is not meeting its target, then the MPCA retains authorities and options to achieve compliance. Regulated MS4 communities should be able to achieve Phase 1 over the first two permit cycles. Planning for Phase 2 should be completed within the first permit cycle. Phase 2 and 3 compliance is proposed to occur over subsequent permit cycles. Tertiary treatments require additional operator training and funding of new development, redevelopment and retrofitting opportunities. The table below provides a summary of the phased approach. 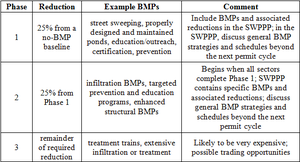 Summary of three phases in implementation plan for regulated stormwater.

Because the WLA for large-watershed TMDL studies is difficult to interpret in the permit, another approach is recommended. The United States Environmental Protection Agency (EPA) has determined that “because storm water discharges are due to storm events that are highly variable in frequency and duration and are not easily characterized, only in rare cases will it be feasible or appropriate to establish numeric limits for municipal and small construction storm water discharges. The variability in the system and minimal data generally available make it difficult to determine with precision or certainty actual and projected loadings for individual dischargers or groups of dischargers. Therefore, EPA believes that in these situations, permit limits typically can be expressed as BMPs, and that numeric limits will be used only in rare instances.” It is therefore appropriate for specific BMPs to be identified as satisfying the WLA. This is a performance-based approach in which BMPs are selected and a load reduction is associated with appropriate implementation of that BMP.

The MPCA recommends an approach that is flexible for BMP selection but prescriptive for the load reduction associated with each BMP. MPCA has not developed specific lists of BMPs for Phases 1, 2 and 3 respectively. Example BMPs for Phase 1 are shown in Appendix A.