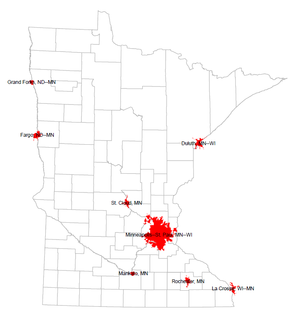 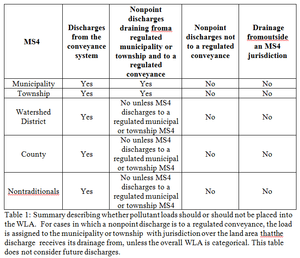 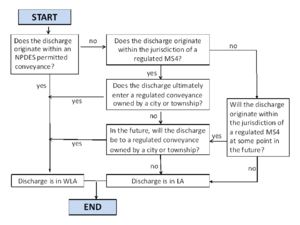 Flowchart for determining whether a discharge goes into the WLA or the LA.

Stormwater discharges (pollutant loads) that typically go to the LA can be included in the WLA if the discharge will eventually be regulated under a NPDES permit. Accounting for future growth in this manner potentially provides incentives to MS4s to implement Low Impact Design (LID) Best Management Practices (BMPs) as development occurs. Incorporating future loads into the WLA also reduces the likelihood that pollutant load will have to be transferred from the Load Allocation (LA) to the WLA which can be problematic if the TMDL report does not clearly establish the procedure for LA to WLA transfers. NOTE: Per EPA’s recent memorandum discussing WLAs for regulated stormwater, LA to WLA transfers are now acceptable without having to re-notice the TMDL, provided the TMDL report explains how the transfer will occur.

MPCA does not advocate individual terms for Reserve Capacity. Reserve Capacity should be built into the WLA or LA. Generally, the WLA will be a lumped total that may include future loads. However, the TMDL can break the WLA down into current and future loads for existing permitted entities. This is not recommended because it makes accounting of loads difficult.

This guidance on future loads applies to nonpoint discharges that currently do not end up in a regulated conveyance system. There are six cases where loads normally put into the LA could be put into the WLA (see below). Note that in all cases, the TMDL report must either assign a WLA to all entities that will come under permit coverage or describe how load transfers will occur once growth occurs. For example, a regulated municipality that will annex a non-regulated township may be given additional WLA to account for growth. If the municipality includes a state highway and a state college, the highway and college should either be given WLAs or the TMDL must describe the mechanism by which WLA will be transferred from the municipality to the other MS4s (see the section on Transfer of Loads).

WLAs assigned for situations 3 through 5 should be individual. WLAs for situation 6 must be individual. Assigning loads for these situations represents an over-allocation based on current land use. The MS4s essentially grow into the allocation. For situations where discharges to impaired waters trigger designation for permit coverage, MPCA’s stormwater program will not designate new MS4s unless they are given a WLA in a U.S. EPA-approved TMDL.

A memo by the U.S. EPA, dated November 26, 2014, indicates that transfers from the LA to the WLA are acceptable ([3]). This represents a change in U.S. EPA guidance. When LA to WLA transfers are allowed, there is no need to identify future growth areas and account for them in the TMDL. LA to WLA transfers are appropriate for addressing any future growth situation. However, the TMDL report must clearly define the process of such a transfer.

Both LA to WLA and WLA to WLA transfers are acceptable. In no case can the overall TMDL change unless the TMDL is resubmitted to the U.S. EPA.

We strongly recommend all TMDL reports describe a process for transferring either LA or WLA to WLA regardless of the likelihood that such transfers will occur. Example language is provided below. Note item 5, which also addresses future point sources that are not MS4s but discharge stormwater.

Future transfer of watershed runoff loads in this TMDL may be necessary if any of the following scenarios occur within the project watershed boundaries:

Load transfers will be based on methods consistent with those used in setting the allocations in this TMDL [Specify method, if needed, e.g., “Loads will be transferred on a simple land-area basis.”]. In cases where WLA is transferred from or to a regulated MS4, the permittees will be notified of the transfer and have an opportunity to comment.

The last paragraph in this language indicates the method(s) of transfer will be consistent with the method(s) used to establish the allocations in the TMDL. It is preferred that this methodology be included in the above language. For example, the paragraph may state the following:

Load transfers will be based on the method used in setting allocations in the TMDL. Load transfers will therefore be based on the land area requiring WLA and an assumption that loading rates are equivalent for all land uses in the watershed. For example, conversion of 10 percent of the watershed from LA to WLA will result in a 10 percent decrease in the LA and a 10 percent increase in the WLA. In cases where WLA is transferred from or to a regulated MS4, the permittee(s) will be notified of the transfer.

When feasible, it is best to accommodate future loads in the WLA rather than transfer load from the LA. Having growth accounted for in the WLA does not require re-visiting a TMDL every time growth occurs. Placing future loads into the WLA also may provide a better estimate of ultimate loading for an MS4, which in turn may allow permittees to better plan for future loads and future growth.

When determining WLAs using the above guidance, TMDL authors should use the best available data and professional judgment in making determinations about what goes into a WLA. When appropriate, TMDL authors should consult with Stormwater program staff to ensure consistency across all TMDLs. Some factors that may influence the amount of rigor involved in determining the WLA include the following.

In general, we want to avoid a situation where there is a gross over- or under-allocation. An under-allocation occurs when insufficient load is included to accommodate future growth. This forces a permittee to reduce loading from the MS4 within its’ existing area and limits flexibility in choosing BMPs. An over-allocation occurs when too much load is included in the WLA. In this situation, permittees can easily demonstrate they meet their WLA, which results in the permittee not having to implement any BMPs even though their current discharge may contribute to a water quality violation.

Case studies can be found at MPCA’s stormwater webpage ([4]).