In the ultra-urban setting of Minneapolis, space for stormwater infrastructure is at a premium in urban retrofit projects such as Heritage Park due to demand for affordable housing intensity and physical constraints. Stormwater from the site before redevelopment was collected through a large underground tunnel system and discharged without pre-treatment directly to the Mississippi River. The challenge at this 145-acre redevelopment site was to incorporate stormwater amenities into the overall site design and best utilize the limited space available.

The Near Northside neighborhood of Minneapolis was originally developed in the late 19th century on land characterized by low-lying swamps, tributary springs, upland seepage and surface runoff areas associated with Bassett Creek. As part of several generations of attempts to build sound low-income housing, the wetland and floodplain areas were filled and drained in the early 20th century. The early single-family structures built here failed, due to these unstable conditions and were replaced by higher-density rowhouses in public housing projects. These also experienced differential settling of structures, utilities, streets and sidewalks over time due to the poor soil conditions.

Stormwater management at the time consisted of directing surface water runoff (including Bassett Creek) through a large underground tunnel system to reduce flooding problems in the area. This tunnel system discharged directly to the Mississippi River. The originally constructed tunnel was replaced in 1992 in a new alignment several blocks to the south to handle the considerably higher runoff volume resulting from suburban and freeway development, leaving the old tunnel in place for local conveyance.

In 1992, the public housing developments occupying the site were the target of a lawsuit charging segregation and isolation of public housing residents. The lawsuit was settled in 1995 through a Decree to determine a re-use plan for the site through a community-based focus group process. The Action Plan developed from these recommendations called for reconnecting the site to surrounding neighborhoods and amenities, demolishing the public housing units, and replacing them with mixed-income housing (25 percent public housing), and a system of parks and open space. The Action Plan was approved in federal court in 1997 and was followed by a Master Plan approved in 2000. The Master Plan called for 900 new mixed-income homes, a combination of rental and for-sale, affordable to families at all income levels. The first units were occupied in November, 2000 and construction is still under way on the remainder.

Stormwater infrastructure for Heritage Park was based on a design that includes a combination of engineered and natural systems set within the development’s park and open space amenities. These serve not only as an effective stormwater treatment system but also restore a sense of place to the traditionally low-income, amenity-poor neighborhood. The stormwater infrastructure for the site treats runoff and non-point source pollution from the 143-acre redevelopment area as well as neighboring residential, commercial, and industrial areas for a total treatment area of roughly 400 acres.

The general stormwater “treatment train” design used for the Heritage Park project area; each step of the process incrementally cleanses the water further. Rainwater running off the streets and park areas carries sediments and pollutants. The Heritage Park system routes the stormwater runoff through grit chambers or forebays to remove sediments, then filters the runoff through plantings and the soil profile before flowing into the open water amenities.

The stormwater treatment system is the core of the park and open space component of the project, merging upland and wetland native plant communities with filtration-based processes to remove pollutants. Larger pond systems anchor the park areas while smaller ponds, wetlands and filtration systems are blended into the transportation corridors and edges of the large park areas.

Stormwater generally enters the system through typical urban catch basins and storm sewers and passes through either grit chambers or into trench forebays for initial removal of large particles. Water is then routed to filtration galleries, which consist of wet meadow or wet prairie plant communities. These galleries promote infiltration, using the cleansing ability of natural vegetation and soil filtration and reducing the velocity and quantity of stormwater. Water then moves directly to ponds or wetlands for further treatment and is then conveyed downstream to the Mississippi River. All surface conveyances are vegetated with native plant communities.

Grit Chambers: Grit chambers are designed to remove large particles and debris from stormwater. Eleven Continuous Deflective Separation® (CDS) units were installed at Heritage Park. Stormwater is diverted from the conveyance system by a weir and flows through an inlet and across a stainless steel screen whose size was based on site-specific performance standards. The unit has a system bypass that allows excessive stormwater flows to continue downstream via the storm sewer system. 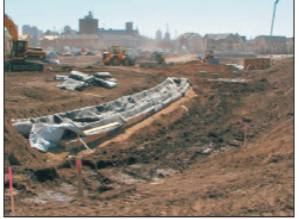 Photo illustrating the installation of a forebay.

Trench Forebays: Trench forebays are located upslope from filtration basins and are engineered pre-treatment systems that act both as flow spreaders, which reduce the velocity of water before it enters the filtration basin, and sediment collectors. The trench forebays will be planted with wetland plants and have a buffer of short grass prairie plantings.

Level Spreaders: Level spreaders are located upslope from filtration basins at the transition point between short grass prairie and wetland community to promote even, low-velocity sheet flow into the filtration basins, preventing erosion and enhancing filtration.

Filtration Basins: Filtration basins treat stormwater through vegetative and soil filtration. As water moves through the soil profile, the pollutants are retained and the cleansed water moves either laterally through drain tiles or vertically to clay soils and then on to open water features. Vegetation is a key aspect of filtration systems. Above ground biomass slows the lateral movements of water and prevents soil erosion and root system increases also increase filtration rates. The filtration system outflows to conveyance channels or downstream ponds. Filtration systems are effective at removing phosphorus, suspended solids, and pollutants that adsorb to particles, such as heavy metals, but require pre-treatment to prevent clogging.

The project is currently working to develop monitoring programs and solicit community partners. Vegetation-based treatment systems need two or three years to become fully established and reach peak efficiency. Options being considered are the City of Minneapolis NPDES stormwater monitoring program, or enlisting the aid of the Mississippi River Watershed Management Organization for monitoring stormwater quality at the downstream end of the Heritage Park system, which would be the end of the treatment train and would provide data on runoff quality entering the Mississippi River. The project will serve as a model for urban areas for how to integrate stormwater management into the urban fabric and harvest it to create high quality neighborhood amenities.

Total costs for the planning and installation of stormwater infrastructure and wetlands portion of the project is estimated at approximately $7.8 million over a five-year period. The Mississippi Watershed Management Organization was a major contributor for this portion of the project along with additional funding from the McKnight Foundation, Metropolitan Council, Hennepin County, U.S. Housing and Urban Development (HUD), and the City of Minneapolis.

This is an on-going project. Since the stormwater treatment system is tied closely to other infrastructure components of the project, the phasing of housing construction dictates treatment system implementation. The stormwater treatment system in Heritage Park is the spine of the new development. Larger pond systems anchor the park areas, while smaller ponds, wetlands and filtration systems are blended into the transportation corridors and the edges of the large park areas. Harvesting stormwater from the impervious surfaces allows the normally disruptive urban hydrologic pattern to be managed so that large expanses of wet prairie, wet meadow, and wetlands are created.

Regular maintenance activities are necessary for the system to function as intended. These activities include the clean-out of settleable solids, floatables, trash, and debris from sump structures in the grit chambers by a vacuum truck. The trench forebays also accumulate sediment, which will be periodically removed by bobcats or loaders. The trench forebays will need to be replanted after this maintenance.