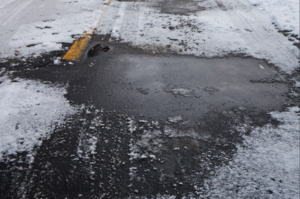 Deicers lower the freezing point of water, resulting in melting of ice when weather conditions are favorable.

Winter weather conditions in Minnesota can cause icy roads and walkways, leading to dangerous conditions for drivers and pedestrians. In order to combat this situation, municipalities, businesses, and individuals often employ the use of deicers. A deicer is a substance that melts or prevents the formation of ice, and does so by lowering the freezing point of water and preventing a bond between ice and paved surfaces. A study by Marquette University found that deicing roads with salt reduces accidents by 88 percent and injuries by 85 percent (Kuemmel and Hanbali, 1992).

While deicers have the ability to greatly improve road and walkway safety, they can also have negative effects on the environment and surrounding infrastructure. Once applied, deicers move with melt water to our surface and groundwater. In addition, some deicers are corrosive and will negatively impact roads, bridges, and other structures, as well as automobiles. Efforts are underway to minimize these environmental and infrastructure impacts, including optimizing deicer application and using of alternative deicing chemicals. Despite these negative effects, the benefits of deicers to public safety ensures they will be utilized for years to come.

The Iowa Department of Transportation prepared a winter maintenance training series that includes a video titled How Deicing Chemicals Work.

Several different types of deicing chemicals exist. Those covered in this section include chloride-based deicers, acetate-based deicers, and carbohydrates. A list of the chemicals approved for use by the Minnesota Department of Transportation (MnDOT) can be found here.

Sodium Chloride. Sodium chloride is the most common deicer used in Minnesota and across the U.S. (Sleeper, 2013). In the Twin Cities Metro Area (TCMA) alone, it is estimated that 349,000 tons of sodium chloride is used each year (Sander et al., 2007). Sodium chloride is usually sold as a solid, though it can be purchased as a pre-wetted or brine solution. The lowest practical melting pavement temperature is 15°F (Local Road Research Board, 2012).

Calcium Chloride. Calcium chloride can be purchased as either flakes, pellets, or as a liquid, and is often wetted and added to sodium chloride to improve deicing performance. Its lowest practical melting pavement temperature is -20°F (Local Road Research Board, 2012). Calcium chloride is also corrosive.

Advantages of acetates include the following.

Disadvantages of acetates include the following.

Acetates include the following.

Carbohydrate-based deicers are often made from the fermentation of grains or the processing of sugars such as cane or beet sugar (Rubin et al., 2010). Small quantities of carbohydrates are sometimes used with other deicers. Alone, carbohydrates do not aid in melting ice or snow; however, their use can help reduce the freezing point of ice further than salt and can help salt stick better to the road surface (Fortin et al, 2014; Rhodan and Sanburn, 2014). Carbohydrates are not corrosive to steel, and at high concentrations, carbohydrates can act as a corrosion inhibitor for salt brines.

There is evidence that the use of carbohydrates in the United States is increasing. For example, sales of a beet based product called Beet Heet were around 900,000 gallons at the end of the winter season in 2013. By February of 2014, 1.5 million gallons of Beet Heet had been sold. The Morton Arboretum in Lisle, Il uses beet juice in their deicers. The beet juice additive has minimal environmental affects, and helps the salt stick where applied. With the addition of beet juice, the arboretum is using nine times less salt, and saving an estimated $14,000 in material costs (The Morton Arboretum, 2014). Another unconventional additive that has been used is cheese brine. Wisconsin has used a cheese brine in at least six counties in the state (Rodan and Sanburn, 2014).