Difference between revisions of "Karst"
Karst 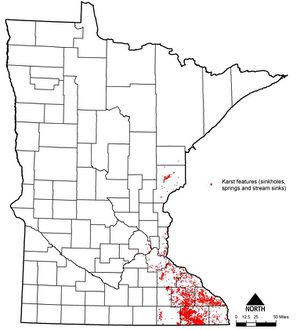 Map illustrating sinkhole probability in Fillmore County, Southeast Minnesota. The highest sinkhole densities are on flat hilltops between or adjacent to river valleys in the western half of the county (shown in red and orange). In these locations, limestone and dolomite is the first bedrock encountered and is typically within 50 feet of the land surface. Source: Minnesota Department of Natural Resources, October 2005.

Karst regions are predominantly found in the southeastern portion of the state and have important implications with respect to geotechnical testing, infiltration, pre-treatment and ponding of runoff. Caution must be used in interpreting the geographic depiction of karst lands as illustrated in the two figures. The figure showing a generalized map of active karst will be less accurate than a county-scale map of actual karstic features.

Karst regions are predominantly found in the southeastern portion of the state and have important implications with respect to geotechnical testing, infiltration, pre-treatment and ponding of runoff. Caution must be used in interpreting the geographic depiction of karst lands as illustrated in the two figures. The figure showing a generalized map of active karst will be less accurate than a county-scale map showing karstic features.

Karst topography is a geological formation shaped by the dissolution of a layer or layers of soluble bedrock, usually carbonate rock such as limestone or dolomite, but has also been documented for weathering resistant rocks, such as quartzite, given the right conditions.

Due to subterranean drainage, there may be very limited surface water, even in the absence of any rivers and lakes. Many karst regions display distinctive surface features, with cenotes, sinkholes or dolines being the most common. However, distinctive karst surface features may be completely absent where the soluble rock is mantled, such as by glacial debris, or confined by one or more superimposed non-soluble rock strata. Some karst regions include thousands of caves, although evidence of caves large enough for human exploration is not a required characteristic of karst (Wikipedia contributors, "Karst," Wikipedia, The Free Encyclopedia, http://en.wikipedia.org/w/index.php?title=Karst&oldid=511209906 (accessed October 11, 2012).

In karst settings where karstic conditions are known to exist, additional constraints and considerations need to be evaluated prior to implementing most structural BMPs. Of particular concern in karst settings is the formation of sinkholes as a result of hydraulic head build up and/or dissolution of carbonate rock (e.g., limestone) or erosion of bedrock (see sidebar) present underneath or adjacent to BMPs. Where karst conditions exist, there are no prescriptive rules of thumb or universally accepted management approaches because of the variability intrinsic to karst terrain. An adaptation of a familiar old saying is very appropriate: the only thing predictable about the behavior of water in a karst system is its unpredictability.

Illustration of a collapsed karst feature where a stormwater pond previously existed.

In general when underlying karst is known or even suspected to be present at the site, stormwater runoff should not be concentrated and discharged into known sinkholes, but should rather be dispersed, or soaked into the ground after adequate pre-cleaning, or conveyed to a collection and transmission system away from the area via vegetated drainageways. In other cases, it may be impossible to remove water from an area with sinkholes or away from karst geology, so common sense clean-up of the water and discharge into the karstic area is a reasonable management approach, especially if some filtering soil is available between the land surface and the karst formation.

Some communities around the country have developed karst area design specifications and soil investigation procedures for siting and designing stormwater BMPs. The following sections represent adaptations from a handful of these communities (e.g., Carroll County, MD [1996a and b]; St. Johns River Water Management District, FL [2001]; and Jefferson County, WV [Laughland 2003]) and should be viewed only as a potential starting point. That is, the complete Minnesota experience is not represented by these resources, but they do represent products that have been put together to assist local stormwater managers deal with karst problems. Additional input was obtained from Professor Calvin Alexander (University of Minnesota) and Jeff Green (Minnesota DNR).

The following general guidelines are based on advice offered by many different sources. Again, the uncertainty characteristic of karst terrain and water movement should be the primary dictate when considering how much additional information to collect in these areas before proceeding with BMP installation. The following guidelines do not contain substantial prescriptive information because of the variability inherent to karst geology in Minnesota.

Structural BMP use in Karst settings.

Karst investigations are recommended for all stormwater facilities that are located in an active karst area with known karstic features (sinkholes, solution cavities, direct hydraulic connection between surface water and ground water). The purpose of a karst investigation is to identify subsurface voids, cavities, fractures, or other discontinuities which could pose an environmental concern or a construction hazard to an existing or proposed stormwater management facility. Of special concern is preventing the possibility that an unimpeded route will be provided to move polluted runoff into the regional ground water system. The guidelines outlined below should not be interpreted as all-inclusive. The design of any geotechnical investigation should reflect the size and complexity of the proposed project, as well as local knowledge of the threat posed by the karstic geology.

Because of the complexity inherent to active karst areas, there is no single set of investigatory guidelines that works for every location. Typically, however, the sequence involves some visual observation for the presence of sinkhole features (the single easiest evidence that active karst is present), followed by an assessment of the subsurface heterogeneity (variability) of the site through geophysical investigation and/or excavation. With this information in-hand, borings or observation wells can then be accurately installed to obtain vertical data surrounding or within a karst feature. The following sections describe general guidance that may or may not be used depending upon the local situation and information deemed as needed.

The investigation should determine the nature and thickness of subsurface materials, including depth to bedrock and the water table. Subsurface data may be acquired by backhoe excavation and/or soil boring. These field data should be supplemented by geophysical investigation techniques deemed appropriate by a qualified professional, which will show the location of karst formations under the surface. This is an iterative process that might need to be repeated until the desired detailed knowledge of the site is obtained and fully understood. The data listed below should be acquired under the direct supervision of a qualified and experienced karst scientist. Pertinent site information to collect includes the following:

There are many different techniques available to view the nature of the subsurface in karst areas. These techniques can be used to detect the presence of karst features or to collect additional data on the character of a known feature. Stormwater managers in need of subsurface geophysical surveys are encouraged to obtain the services of a qualified geophysicist experienced in karst geology. Some of the geophysical techniques available for use in karst terrain include: seismic refraction, ground-penetrating radar, and electric resistivity. The surest way to determine the flow path of water in karst geology is to inject dye into the karst feature (sinkhole or fracture) and watch to see where it emerges, usually from a spring. The emergence of a known dye from a spring grants certainty to a suspicion that ground water moves in a particular pattern. Dye tracing can vary substantially in cost depending upon the local karst complexity, but it can be a reasonably priced alternative, especially when the certainty is needed.

Once the character of the cover material is known and understood, borings can be used to obtain the details of the subsurface karst features at specific locations. It must be noted, however, that the local variability typical of karst areas could mean that a very different subsurface could exist a very small distance away, perhaps as little as six-inches. To accommodate this variability, the number and type of borings must be carefully assessed. If the goal is to locate a boring down the center of a sinkhole, the previous geophysical tests or excavation results can show the likely single location to achieve that goal. If the goal is to “characterize” the entire site, then an evaluation needs to occur to determine the number and depth needed to adequately represent the site. Again, the analyst must acknowledge the extreme variability and recognize that details can easily be missed. Some general guidance for locating borings include:

Number and Depth of Borings

The number and depth of borings will depend entirely upon the results of the subsurface evaluation obtained from the observational, geophysical, and excavation studies, and other borings. There are no prescriptive guidelines to determine the number and depth of borings. These will have to be determined by the qualified staff conducting the BMP management evaluation based upon the data needs of the installation. The borings must extend well below the bottom elevation of the designed BMP, however, to make sure that there are no karst features that will be encountered or impacted as a result of the installation.

All material identified by the excavation and geophysical studies and penetrated by the boring should be identified, as follows:

At least one subsurface cross section should be provided for the BMP installation, showing confining layers, depth to bedrock, and water table (if encountered). It should extend through a central portion of the proposed installation, using the actual geophysical and boring data. A sketch map or formal construction plan indicating the location and dimension of the proposed practice and line of cross section should be included for reference, or as a base map for presentation of subsurface data.

There are several approaches to sinkhole remediation if it is found that such an approach is desirable. Sinkhole sealing involves investigation, stabilization, filling and final grading. In the investigation phase, the areal extent and depth of the sinkhole(s) should be determined. The investigation may consist of excavation to bedrock, soil borings, and/or geophysical studies. Sealing small-sized sinkholes is normally achieved by digging out the sinkhole to bedrock, plugging the hole with concrete, installing several impermeable soil layers interspersed with plastic or geotextile, and crowning with an impermeable layer and topsoil. For moderate sinkholes, an engineered subsurface structure is usually required.

It is often not feasible to seal large sinkholes so other remediation options must be pursued. These could include construction of a low-head berm around the sinkhole, clean-out of the sinkhole to make sure all potentially contaminating materials are removed, landscaping and conversion of land use in the sinkhole to open space or recreation, provided it can be done in a manner that provides adequate safety. In any of these cases, pre-treatment of any stormwater entering the sinkhole is imperative. Final grading of sinkholes in open space settings should include the placement of low permeability topsoil or clay and a vegetative cover, with a positive grade maintained away from the sinkhole location to avoid ponding or infiltration, if feasible.

Monitoring of BMPs in Karst Regions

A water quality monitoring system installed, operated and maintained by the owner/operator may be desirable or even required under some circumstances, particularly where drinking water supplies are derived from ground water or in association with known sources of contamination. The location of monitoring wells or BMP performance monitoring will again depend upon the nature of the BMP and surrounding karst characteristics. As with all nonpoint source related monitoring, the capture of runoff events is the key goal. In karst areas, this could mean the installation of a monitoring system designed to reflect variable water behavior typical of karst water flow. Attempting to monitor this behavior without a thorough understanding of the local geology will be difficult and could lead to a wasted effort.