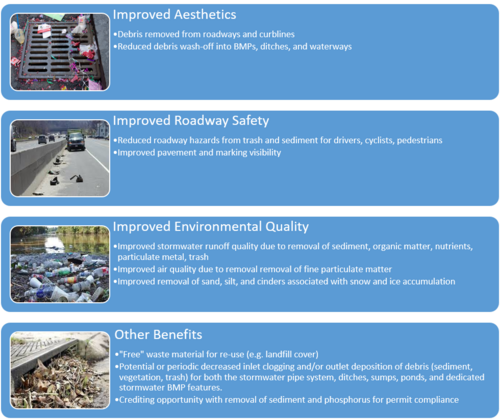 Street sweeping (also called street cleaning) refers to removal of sediment, litter, or other accumulated substances on roadways, particularly in urban and suburban areas. Street sweeping does not include removal of large quantities of leaves brought to the street/verge for removal, large debris or bulky items; removal of these items is typically handled by large vacuum leaf collectors or dump trucks, respectively.

Historically, street sweeping was conducted manually by a sanitation worker with a broom or shovel to remove animal waste from horse-drawn vehicles and other detritus on roadways. Mechanical sweepers such as broom systems attached to horse carts came about in the mid-1800s, and in the early 1900s street cleaning wagons sprayed water onto roadways to wash away debris. Motor-driven street sweeping vehicles were patented in the US in 1917.

Modern street sweeping has improved efficiency of debris removal from roadways dramatically. The focus of street sweeping was simple large “cosmetic” debris removal until the 1970s when concerns about water quality arose. In the decades following, improvements in street sweeping technology focused more on the removal and collection of coarse sand particle-sized street dirt, and smaller particles which contribute to instream sediment and nutrient pollution when swept off of or washed into waterways. Even when a street was cleaned of large refuse, the amount of tiny particulate matter that could not be effectively removed manually remained to wash-off into waterways following precipitation. Pollutants in stormwater runoff have long been recognized as contributors to aquatic habitat degradation, nuisance algal growth, low dissolved oxygen and toxicity in receiving water bodies. More recently, there has been a focus on street sweeping to remove the organic matter produced by street trees (leaves, seeds, flowers, etc), which can contribute significant amounts of phosphorus to runoff, especially in the fall during leaf drop. Particulate matter (air) also poses significant air-quality concerns when entrained in the air due to wind. 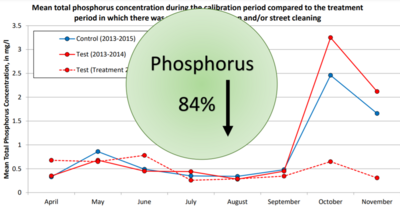 Research conducted by Bill Selbig (USGS) shows that streets, when cleaned of leaf litter prior to a storm, can significantly decrease phosphorus loads in stormwater runoff (Link to study)

Roadways accumulate debris and material such as sediment, vegetation, vehicle debris/waste, industrial emission particle deposition, and litter. Harmful pollutants which accumulate on roadways, parking lots, and pavement include metals, organics, nutrients, and particulate matter, which street sweeping helps remove. The effectiveness of street sweeping for removing specific pollutants depends on the timing and methods of sweeping, including season, frequency of sweeping, timing relative to runoff events, type of sweeper(s), sweeping practices such as speed of sweeper and vehicle parking, and the characteristics of the surface being swept (land use, surface roughness, etc.). Recommended sweeping practices for water quality purposes can be found on the page called Recommended street sweeping practices for water quality purposes. Links to other information on street sweeping, including case studies and credit calculations and calculators can be found on the page called Street sweeping.

Below is a qualitative summary focused on pollutant and sweeper type.

For more information on stormwater and pollutants in stormwater, link here. 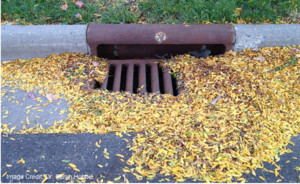