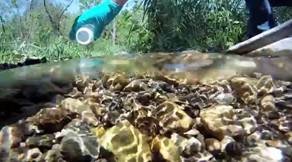 Collecting a stormwater sample the right way is important.

Permittees are required to sample quarterly until results from four separate quarters average below the permit benchmark value(s):

If you were you unable to collect samples during Quarters 1-4 or your averaged results were above the permit benchmark value(s), continue sampling:

Check out the Monitoring Guidance Manual For Minnesota’s Industrial Stormwater Multi-Sector General Permit to learn the answers to these questions:

Permittees may use any Minn. Department of Health Certified Testing Laboratory to conduct analyses required by the permit. Click on the "customized searches" tab and select "Minnesota" in the state/province drop down option. Fill out and send in the sampling form to the MPCA.

Tip: If faced with collecting a sample after 30 minutes of discharge leaving your monitoring location or trying to sample another day, do not wait another day. Collect the sample now.

Because you are required to collect four benchmark samples in four separate quarters, winter thaw or winter rains will occur and collecting stormwater samples in the winter is often obtainable state-wide. Snow melt has the potential to carry significant accumulations of pollutants offsite.