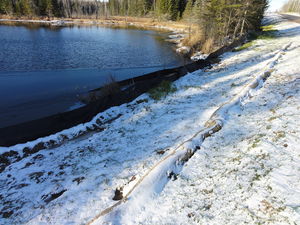 Photo of a well-constructed silt fence. 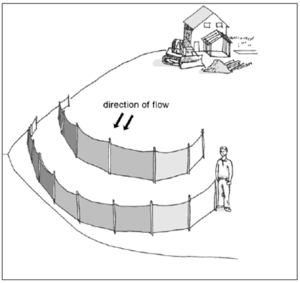 Schematic of silt fencing - one of the most commonly used methods of perimeter control. Source: Clark County Washington.

Perimeter controls for disturbed areas are temporary sediment barriers that intercept and remove soil and debris from sheet flow runoff on construction sites. Removal mechanisms include ponding the runoff to allow for settling, and physically filtering sediment as it passes through a sediment barrier (e.g., silt fence, rock/soil berm, gravel bags, fiber log, etc.). Some designs (e.g., berms, ditches) use perimeter controls to collect and convey sheet flow to larger treatment areas, such as sediment traps, where sediment removal can occur through multiple processes.

In most applications, treatment occurs at or along the perimeter control device, e.g., silt fence, rock berm, and fiber log. Other applications may involve the use of perimeter control berms or ditches to direct sheet flows to a treatment area, such as a sediment trap, sediment basin, or other BMP. Perimeter controls are generally recognized as the last line of defense in a system of erosion prevention and sediment control, and are usually placed near the downgradient borders of disturbed areas and soil stockpiles. They are also used to separate work zones from adjacent waterbodies.

Caution: To the extent feasible, erosion prevention practices such as stabilization are preferred to sediment control practices.

Perimeter controls are useful on nearly every site as part of a system of BMPs designed to prevent erosion and control sediment transport to offsite areas. The selection, installation, operation, and maintenance of a particular perimeter control or group of controls is based on site considerations: slopes, soils, site size, proximity of waterbodies, and other factors. In general, super duty silt fence and rock berms provide the most protection, and are typically indicated below steeper, longer slopes under construction during the wet season. Shorter, flatter slopes under construction during dry or frozen periods can be protected with lighter duty controls (e.g., fiber rolls). The use of silt fences as a sediment barrier is not recommended in areas of concentrated flow, such as ditches. In these cases, soil berms, silt dikes, straw wattles, excelsior logs, rock check dams, or other BMPs suitable for concentrated flow should be used.

The Construction Stormwater General Permit requires sediment control practices to be established on all downgradient perimeters and located upgradient of any buffer zones. The perimeter sediment control practice must be in place before any upgradient land‐disturbing activities begin. These practices shall remain in place until Final Stabilization has been established.

Perimeter control BMPs are effective at preventing offsite sediment discharges in sheet flow when used with an appropriate upgradient system of erosion prevention and sediment control BMPs (e.g., upslope diversions, timely seeding and mulching) that minimize both the area and time of exposed soil. In general, perimeter controls are high-maintenance BMPs, particularly after rain events. The following table summarizes expected performance for an array of typical water quantity and quality target constituents for properly selected, installed, and maintained perimeter controls.

Expected performance for perimeter control
Link to this table

As noted above, perimeter controls typically require a high degree of maintenance. For best results, plan and schedule project activities to minimize maintenance requirements, ideally through timely grading operations and stabilization of disturbed areas with seeding, mulching, or other ground covers. Timing of perimeter control installation may be adjusted to accommodate short term activities, such as clearing and grubbing, and passage of vehicles. Such activities must be completed as quickly as possible and the perimeter control BMPs reinstalled immediately after the activity is finished, or before the next precipitation event, whichever comes first.

Perimeter control design is driven by the size of the site and drainage area, slope steepness, soil type(s), proximity of waterbodies, and other factors. The design of a site’s perimeter control system should anticipate ponding that will occur upslope of the controls, and provide sufficient storage and deposition areas. Stabilized outlets are also required to prevent flows from overtopping the controls at undesired locations. The subsections below contain specific design information for the various types of materials that may be used to construct perimeter control BMPs. For all of the subsections below, the following design considerations apply. 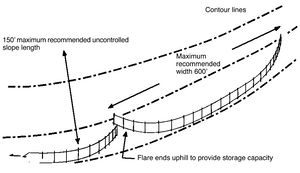 Silt fencing is the perimeter control BMP used on most construction sites, and is moderately to very effective if sited, installed, and maintained properly. Silt fencing is intended to slow velocities and temporarily detain incoming runoff so that sediment is removed by settling and filtration – i.e., as muddy water passes through the fabric. Design and installation considerations for silt fencing includes the information below.

The following describes the components and installation of the silt fence: 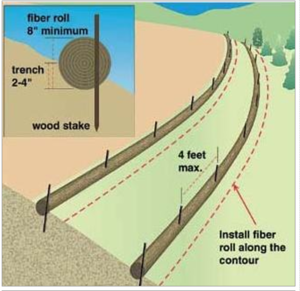 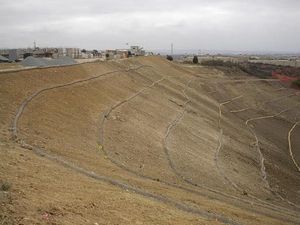 Design guidelines for using fiber logs as perimeter controls include:

Rock and other berms 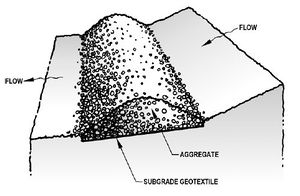 Perimeter control berms consisting of stabilized soil, rock, rock bags, mulch, compost, grubbed roots and brush, and other material can also serve to reduce sediment discharges offsite, through ponding, filtration, or redirection of runoff to a sediment trap or other treatment unit. These systems are a very efficient method for sediment removal, but may require frequent maintenance as they are prone to clogging from mud and soil. In addition, installation may be labor intensive, they are easily damaged by equipment, and removal can be difficult. Design considerations include the general guidelines listed at the beginning of this section, as well as those listed below.

Perimeter control ditches function like soil berms – they redirect downslope sheet flow from the disturbed area perimeter to a sediment trap, settling pond, rock berm, or other treatment unit designed to settle or filter soil from site runoff. Design considerations include the following.

Permit requirements specify that all construction sites must remain in compliance throughout winter, even if no construction is occurring. Properly functioning sediment controls must remain in place during minor thaws and during the large spring snowmelt to prevent transport of sediment to surface waters. The best way to ensure proper functioning of perimeter controls throughout winter is to have all sediment controls installed prior to the first freeze. For winter construction, materials such as compost berms, logs and rolls, fiber rolls, rock bags, and rock filters can be installed over snow cover to provide new sediment control. All BMPs must be inspected and maintained immediately following intermittent snow melt or rainfall that occurs in winter months.

For all perimeter control BMPs, initial inspections should ensure that controls are intercepting all upslope runoff from disturbed areas. Check upslope areas to determine if there are opportunities to reduce the volume of runoff being handled by perimeter controls, reduce the amount of sediment in the runoff (i.e., by installing diversions above the disturbed area), or immediately stabilize idle bare areas and/or portions of the site that are at final grade. Where perimeter controls redirect flows to sediment traps, ponds, or other treatment BMPs, ensure that berms/ditches are stable, flow paths are unobscured, and that the treatment BMP is able to handle inflows appropriately and are functioning properly. If it is determined through inspection that the selected perimeter control BMPs are ineffective, they must be upgraded to a method that is effective at keeping sediment on the site.

MnDOT’s workmanship and rework schedule (2016; version under development at the time of manual update) identifies common deficiencies for various types of perimeter control BMPs and corrective actions for these deficiencies. Once complete, the full, final version of this table will replace Table 2573-1 in MnDOT Standard Specifications for Construction (2016 edition).

The subsections below provide additional inspection guidelines for each of the BMPs addressed in the section above.

Rock and other berms

The maintenance guidelines below respond directly to the inspection findings that result from observing field conditions listed in the previous section. For best results, complete maintenance tasks immediately, before conditions worsen and consume more time and resources to resolve. Below are some key requirements from the 2018 MPCA Construction Stormwater General Permit. 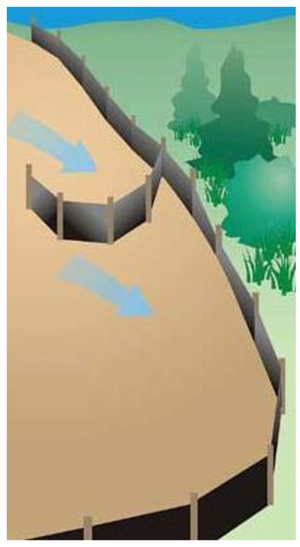 Use of J-hooks along silt fences

Other maintenance guidelines include:

Except where more stringent requirements are presented in this guidance, perimeter controls shall comply with MnDOT and other state requirements. Primary design references include:

The following is a list of additional resources that are not specific to Minnesota: