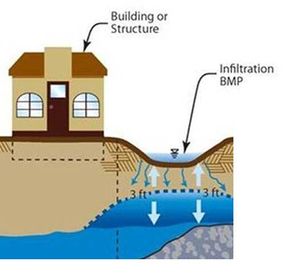 Schematic illustrating how depth to water is calculated. Note that a temporary mound formed as a result of infiltration is not included in the determination of depth to water. (Source: CDM Smith)

Why is shallow groundwater a concern?

Removal of some pollutants (e.g., bacteria) can occur in the vadose zone beneath the base of the BMP. Pollutant removal in the vadose zone is attained via biological activity, chemical degradation, adsorption of pollutants to soil, and plant uptake. Shallow groundwater reduces the depth of the unsaturated soil available for treatment, leading to an increased likelihood of groundwater contamination. The vadose zone is further reduced when a groundwater mound forms. These sites present challenges to stormwater management, however these challenges can be managed. General guidelines for investigation and management are presented in the following sections.

How to investigate for shallow groundwater

Geotechnical investigations are recommended for all proposed stormwater facilities located on sites where it is suspected that the 3 foot vertical separation between the base of the BMP and the groundwater table might not be achievable. This is needed to show that requirements of the CGP have been met. The guidelines for how to investigate for shallow groundwater are summarized below. Guidelines for investigating all potential physical constraints to infiltration on a site are presented in a table at this link. These guidelines should not be interpreted as all-inclusive. The size and complexity of the project will drive the extent of any subsurface investigation. Regardless of the results of the initial site screening, soils borings and infiltration tests should be performed to verify site soil conditions.

The investigation is designed to determine the nature and thickness of subsurface materials, including depth to bedrock and to the water table. Subsurface data for depth to groundwater may be acquired by soil boring or studying existing wells on the site, if present. These field data should be supplemented by geophysical investigation techniques deemed appropriate by a qualified professional, which will show the location of the groundwater formations under the surface. The data listed below should be acquired under the direct supervision of a qualified geologist, geotechnical engineer, or soil scientist who is experienced in conducting such studies. Pertinent site information should include the following:

All material penetrated by the boring should be identified, as follows.

What are general stormwater management guidelines for areas with shallow groundwater?

The following investigations and design variants are HIGHLY RECOMMENDED for infiltration BMPs proposed to be located in areas of shallow groundwater:

MPCA is often asked why it allows a sedimentation pond (no liner) to be constructed that may intercept the water table, but require a minimum of 3 feet of separation from the bottom of any constructed infiltration practice and the water table. The treatment processes for these two practices are very different and may help to explain the requirements. A stormwater pond achieves pollutant removal through the process of settling of suspended solids. If the basin is large enough, contains vegetation, and has a long detention time, additional treatment through biological uptake and microbial action can also occur. An infiltration practice removes pollutants through filtering that occurs in the minimum 3 foot unsaturated soil layer beneath the practice along with the biologic and microbial activity that takes place in the layer under aerobic conditions.