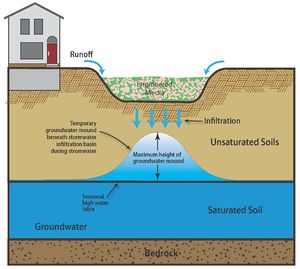 When is groundwater mounding a problem?

The vadose zone is the unsaturated depth of in-situ (existing) soil below the infiltration BMP. Contaminants that are not captured within the BMP may be attenuated within this zone. The temporary rise of the groundwater elevation caused by mounding will decrease the available vadose zone, which may decrease the removal of certain pollutants. If the mound reaches the base of the infiltration BMP, then the hydraulic gradient (direction of water movement) shifts from vertical to horizontal and significantly slows the movement of water through the soil. Groundwater mounds that significantly widen below the base of an infiltration BMP may damage underground utilities, basements and building structures if the mounds are high enough and there is not enough separation between the mound and structures (Machusick and Traver, 2009). Groundwater mounds may also affect local hydraulic gradients and mobilize contaminants that are in soil or groundwater.

When should a mounding analysis be conducted?

How to predict the extent of a mound

Both analytical and numerical methods exist that can predict the extent of a groundwater mound. The most widely known and accepted analytical method is based on the work by Hantush (1967). A simple Excel spreadsheet of the Hantush Method was created by the USGS. This method requires the user to input information on the recharge rate, specific yield, horizontal hydraulic conductivity, dimensions of the infiltration BMP, and the initial thickness of the unsaturated zone. The result is considered by experts to be a simplified version of the actual site conditions. The Hantush method can be limited by it's assumptions, which include no storage loss, uniform and horizontal infiltration, and vertical sides to the BMP. If these assumptions are violated then a more robust numerical method should be used.

A common numerical method is to model site conditions using computer simulations. MODFLOW is the most widely used among the many programs that exist. While numerical modeling can provide a more accurate representation of site conditions, it also requires the user to have considerable training in order to develop the model and run simulations and interpret the results.

Guide to using the mounding calculator 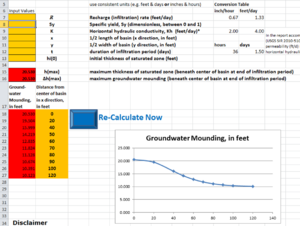 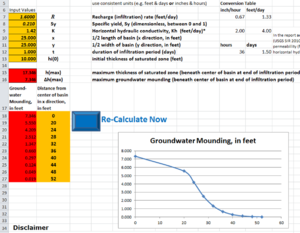 Screenshot of the USGS calculator after entering data. Note the values entered into the yellow cells. The red cells are values calculated after clicking on the Re-Calculating Now icon.

Here we present a step-by-step example of using the mounding calculator with screenshots. The image on the left shows the calculator with no values entered. You are installing an infiltration practice. Soil borings indicate the underlying soil is a sandy loam. The infiltration rate is 0.8 inches per hour or 1.6 feet per day. The specific yield is 0.21 and the hydraulic conductivity is 0.000005 meters per second or 1.42 feet per day (link here). The dimensions of the practice are 50 feet by 50 feet. Enter half of these values (25 feet) into the spreadsheet, as indicated in the spreadsheet. The basin is 1.6 feet deep, so the duration of infiltration is 1 day since the infiltration rate is 1.6 feet per day. We do not know the thickness of the saturated zone so use a value of 10 feet. We enter these values into the calculator and click on the Re-Calculate Now icon. We are looking for that distance at which the mound height is 0.25 feet and notice the value is difficult to determine with the default distances used in the calculator, so we change the distances at which we want the calculations made (we use 20, 24, 28, 32, 36, 40, 44, 48, and 52 feet, as shown in the figure to the right). We re-calculate and see the mound height is 0.25 feet at a distance of about 41 feet. We could change the calculation distances again if we wanted to get a more exact measurement. Since the mound height is given from the center of the infiltration practice, we have to subtract off the length beneath the practice in order to determine how far the plume extends beyond the practice. We thus subtract off 25 feet because the calculation is made from the center of the practice, giving a distance of 41 minus 25 or 16 feet. We multiply this by a safety factor of 2 to give a distance of 32 feet. Any point of groundwater contamination should therefore be 32 feet or more from the edge of the infiltration practice. 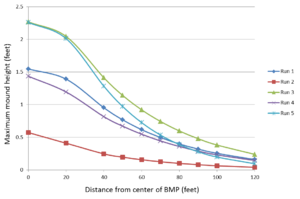 We used the Excel spreadsheet developed by the USGS to calculate mounds for five scenarios. The soil was assumed to be a medium sand. Calculator inputs that were held constant included aquifer specific yield (0.26), horizontal hydraulic conductivity (55 feet/day), and time (2 days to simulate the 48 hour drawdown requirement in the Construction Stormwater Permit). Calculator inputs that were varied include recharge (values of 1 and 1.5 feet, which simulates the ponded depth in the BMP), the dimensions of the BMP, and the aquifer thickness (values of 5 and 10 feet). The calculator utilizes values for 1/2 the length and 1/2 the width of the BMP. Results are shown in the table to the right.

Run 1 was the base scenario in which a 1 inch performance goal was met for a 1 acre impervious site. The BMP for this scenario was a square practice, 60 feet on a side, with a 1 foot ponding depth. The results indicate that a mound of about 1.5 feet develops directly under the BMP. At the perimeter of the BMP the projected mound is 1.2 feet. Recommended separation distance is 10 feet from a building or structure. At this distance, the water table would be raised a maximum of 0.95 feet. Assuming the media is 1 foot thick and the distance to the water table is the minimum required depth of 3 feet, the water table at this separation distance would be about 4 feet below ground surface (3 foot vertical separation + 1 foot of media + 1 foot ponding depth). At a distance of 120 feet from the edge of the BMP the water table rise resulting from infiltration would be less than 1 inch.

The size of the BMP was reduced for Run 2, with 30 foot sides instead of 60 foot sides. Decreasing the size of the practice greatly reduced the height and extent of the mound, with a maximum mound height of less than 1/2 foot in the center and less than 4 inches at the perimeter of the BMP. The infiltration practice only achieves about 25 percent of a 1 inch performance goal. However, the results suggest multiple practices could be used to minimize the effects of mounding since the mound does not extend far laterally. At a distance of 90 feet from the center of the infiltration practice the predicted rise of the water table is less than 1 inch.

In Run 5, the aquifer thickness was reduced by half, resulting in a significant increase in mound height and extent. If the aquifer thickness were doubled, from 10 to 20 feet, the resulting mound would be significantly less, with a maximum mound of less than 1 foot and a water table increase of about 0.7 feet at the edge of the infiltration basin.

The results support the above discussion on predicting a mound and give an indication of the magnitude of the mound under differing conditions. These runs were simplistic but may provide some indication of the magnitude of mounding that will occur under an infiltration BMP. The calculator is easy to use and inputs can easily be determined from the literature. A suggested reference for calculator inputs is here.

We ran several scenarios using the USGS calculator, adjusting each of the input variables several times while holding the other variables constant. Results of this analysis can be seen in the Excel spreadsheet link shown below. When using this spreadsheet, open the tab called Read me, which explains how to use the information in the spreadsheet.