Over the past decades, Burnsville’s Crystal Lake had seen a marked decrease in water clarity, due in part to algae bloom resulting from increased phosphorus entering the lake. Water quality typically decreased from spring to late summer, which impacted recreational use of the lake. 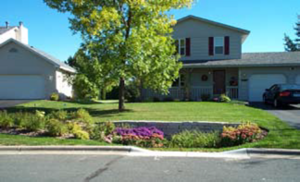 Photo showing one of the rain gardens installed as part of the Burnsville rain garden project.

Recognizing that incoming stormwater from surrounding residential neighborhoods was an important factor in lake health, the City of Burnsville sought an alternative treatment method to reduce that runoff. However, curb and gutter was already in place in the 20-year-old neighborhoods near the lake, and there was insufficient room for traditional stormwater ponds.

Rain gardens—shallow, vegetated depressions that capture runoff and allow it to soak into the ground—emerged as the best solution. In addition to suiting the space and budget constraints in this fully built residential area, rain gardens offer visual amenity that tend to increase residents’ commitment to help implement and maintain them. 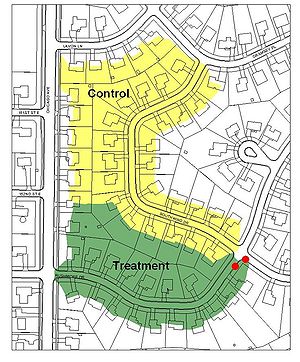 With the help of two grants—$30,000 from the city and $117,000 from the Metropolitan Council—Burnsville was not only able to design and build the gardens, but to implement a study to gauge their effectiveness. A paired watershed study—monitoring one 5.3 acre neighborhood with 17 rain gardens and a similar, no-rain-garden neighborhood nearby—allowed the city and its partners to see how the BMPs performed during actual storm events.

To get baseline data, gauges were installed in each neighborhood to measure runoff for two summers prior to rain garden installation.

Since the greatest concentration of pollutants is washed off impervious surfaces during the first inch of precipitation, rain gardens are designed to accommodate that “first flush” from a given watershed. The Burnsville gardens were designed to accommodate 0.9 inches and drain rapidly, within 24 to 48 hours. Rain gardens can be planted with many types of vegetation, including native perennials and shrubs or cultivated varieties. The Burnsville participants were given the choice of three basic garden styles: native wildflower, cultivated perennials and/or shrubs.

Following evaluations of soil and topography, city staff and consultants sought to educate area residents about efforts to improve Crystal Lake water clarity and how rain gardens fit into the picture. The Rushmore Drive neighborhood, characterized by gentle topography and sandy soils, was selected, with hopes of getting at least 30 percent of the 25 residents to participate. As it happened, 85 percent of households signed on, resulting in 17 gardens—13 in front yards, 4 in back. All but one selected a scheme using low-maintenance cultivated perennials and shrubs, which tend to look neater than an all-native garden.

Grading plans, created by engineer Kurt Leuthold, in consultation with landscape architect Fred Rozumalski, incorporated stone retaining walls and gradual slopes from street to basin. During the design phase, Gopher One marked underground utilities so they could be accurately surveyed. The project engineer stresses the importance of this step to help minimize pre-construction surprises and changes.

The landscape architect met with homeowners and drew up planting plans that considered individual resident preferences. Each garden is separated from the street and curb cut by a mow strip, which serves two purposes: to lend a neat, intentional edge to the garden and to trap sediment traveling with the rainwater. The planting designs emphasize showy groupings of tidy-looking plants, which enhance the appearance of the front yards. Construction began in fall 2003. In order to avoid hitting utilities and to ensure proper flow, precise grading of the gardens was critical, as was close adherence to soil specifications and avoiding compaction. Native sandy topsoil was stockpiled and mixed with compost, then installed at a depth of 12 inches following grading. To ensure quality, the city relied on the engineering consultant to do extensive construction observation, and Gopher One marked utilities two additional times—before sod stripping and soil removal and also prior to grading.

Photos illustrating a private residence before and after installation of a rain garden. Notice the curb cut from the street into the rain garden.

Small construction companies were more responsive to the request for bids on this relatively small project (the grading budget was $50,000); city staff indicated that in the future they would not solicit bids from large companies for a project of this scale.

Instead of having planting completed by the contractor, the Burnsville project utilized resident-volunteers to plant their own gardens, with the help of the landscape architect and city staff. This not only helped keep the budget down, but gave homeowners a hands-on investment in their gardens, and familiarized them with the plants. 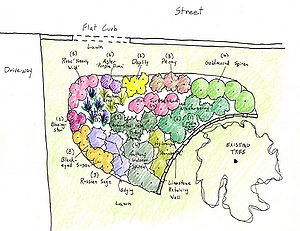 Schematic showing the design for a rain garden. Note the placement of plants within different locations in the rain garden.

In order to let plants become established before being inundated, curb cuts were not made until spring 2004. It is important to design curb cuts sufficiently wide so stormwater actually reaches the gardens; a too-narrow cut can allow water to wash on by. At Burnsville, the typical curb opening was 6 feet, with 2 feet tapering sections on each side.

Cost per garden was approximately $7500, with about $500 of this going toward plants.

Resident reviews have been favorable (an important factor in ongoing success of the gardens), and the monitoring data indicates excellent results.

2004 monitoring data showed that the rain gardens achieved an 80 percent reduction in runoff volume in 49 rain events. Most basins drained dry within 3 to 4 hours. During winter, some ice build-up was evident, but as the melt infiltrated, ice collapsed and disappeared with no adverse effects. 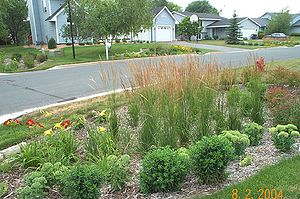 The Dakota County Soil and Water Conservation District conducted runoff audits on each lot in the study neighborhood to provide homeowners with additional suggestions on reducing runoff from their properties, such as redirecting downspouts, installing rain barrels to capture roof runoff and aerating lawns to enhance infiltration.

Another effort to benefit Crystal Lake, a single infiltration basin in West Buck Hill Park, was installed in fall 2004. It accepts runoff from a 25-acre sub-watershed.

The Burnsville rain garden project area and control neighborhood are being monitored through 2005. While the success of the project recommends installing more rain gardens elsewhere in the city, the project coordinator has departed, so it is unclear whether additional gardens will be built in the near future.