For a printable version of this page, click here. 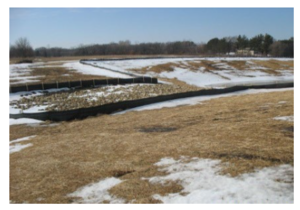 The perimeter sediment control BMPs must be established on all down gradient perimeters and up-gradient of buffer zones before any land disturbing activities begin. These BMPs shall remain in place until final stabilization has been established. If the down gradient perimeter controls are overloaded, additional up gradient controls may be necessary to prevent further overloading. The selection of perimeter control BMPs is the permittee’s decision, but it must be effective at keeping sediment on the site. If it is determined through inspection that the selected method is not effective, then the BMP must be upgraded to a method that is effective at keeping sediment on the site.

The timing of the perimeter control installation may be adjusted to accommodate short term activities such as clearing and grubbing, and passage of vehicles. This means these BMPs may be taken down as necessary to allow vehicle on and off areas of the site or to allow work such as utilities to be installed through the perimeter BMP. These short term activities must be completed as quickly as possible and the perimeter control BMPs must be reinstalled immediately after the activity is finished. All perimeter control BMPs, however, must be in place before the next precipitation event, even if the activity is not complete. Click for full details of the NPDES/SDS Permit requirements, 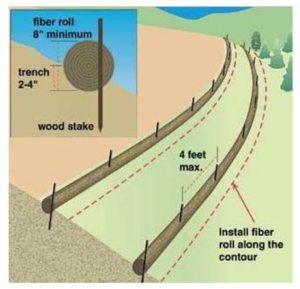 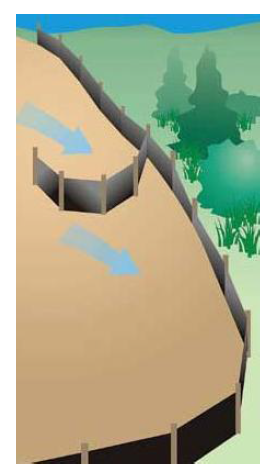 Perimeter controls should be planned as a system, taking the entire site into consideration and installed prior to any land disturbing activity, and only need to be installed in locations down gradient of the construction. The design of a site’s perimeter control system should anticipate ponding that will occur up gradient of the controls and provide sufficient storage and deposition areas and stabilized outlets to prevent flows from over topping the controls. The SWPPP must account for the following factors in designing the temporary erosion prevention and sediment control BMPs including perimeter controls:

Flows should be strategically directed to specified deposition areas through appropriate positioning of the perimeter controls and site grading. Sometimes additional perimeter controls need to be added or moved to different locations on a project as conditions change. For example, perimeter control is installed above street curbs once the curb and gutter system is installed to keep sediment out of the water conveyance. Some perimeter controls can be relocated as needed, such as biorolls, rock logs, sand bags, and triangular silt dikes. Keeping a vegetated buffer between disturbed areas on a construction site and the down gradient perimeter control BMP can help the BMP perform better and need less maintenance. 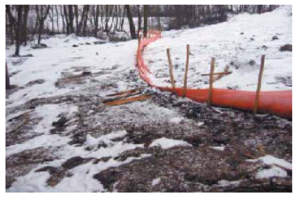 The NPDES/SDS Permit requires that all BMPs are inspected once every seven days or within 24 hours of a rainfall event greater than 0.5 inches in 24 hours. All perimeter control devices must be repaired, replaced, or supplemented when they become nonfunctional or the sediment reaches one half (1/2) of the height of the device. These repairs must be made by the end of the next business day after discover, or thereafter as soon as field conditions allow access.

After the contributing drainage area has been stabilized, all sediment controls and the associated sediment build up must be removed and disposed of properly. Care should be taken to dispose of sediment in a location that is not susceptible to erosion.

It is important to consider winter conditions when planning a perimeter control system. All construction sites must remain in compliance with the NPDES/SDS Permit throughout the winter even if no construction is occurring. It is imperative that properly functioning sediment controls are in place during minor thaws and for the large spring snowmelt to prevent transport of sediment to area surface waters. For this reason, the BMPs must be installed and functional prior to winter freeze up. The BMPs must be inspected and maintained immediately following intermittent snow melt or rainfall that occurs in winter months. If construction resumes during the winter, then the weekly inspection schedule must also resume.

The best way to ensure proper functioning of perimeter controls throughout the winter is to have all sediment controls installed prior to the first freeze. Stakes needed for some sediment control BMPs will be difficult, if not impossible to install into frozen ground. The site’s SWPPP should clearly outline the strategy to prepare the site for the winter months.

If construction is going to continue during the winter and new areas will be disturbed that requires new sediment controls; materials such as compost berms, logs and rolls, fiber rolls, rock bags and rock filters can be installed over the snow cover. These installations will need extra care and frequent inspections to assure continued effectiveness. 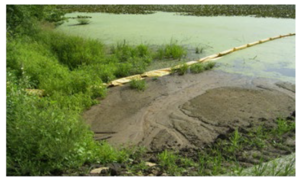 It is critical to ensure down gradient perimeter controls are utilized during work on stream banks and lake shores to keep sediment from washing into open water. Sediment discharges resulting from this type of construction can result in enforceable water quality violations. Sites that include work in public waters permits from the Department of Natural Resources (DNR) that also have coverage under the Minnesota Pollution Control Agency’s (MPCA) general construction stormwater permit are required to comply with the conditions in both permits, including the use of down gradient perimeter controls to minimize sediment discharges.

More specialized types of sediment control BMPs may be needed to protect surface waters during construction that extends below the water surface. Whenever possible, work below the Ordinary High Water table should be done in a manner that keeps water out of the work area, or separated from flowing water. For example, coffer dams made of sheet pilings or other materials to isolate the work from the water or water diversions to divert water around the work area may be the best choices during bridge construction or any work that encroaches into open water.

Biorolls, rock logs, sand bags, triangular silt dikes, geotextile wrapped jersey barriers or stabilized soil berms that can easily be relocated may be best during stream bank restoration work. The perimeter control method may need to change as work changes at the site. Therefore, multiple perimeter control methods may be employed at one site at different times or at the same time.

If the work is conducted on an MPCA designated special water, such as a trout stream or scenic and recreational river segment, redundant BMPs must be employed when an existing 100 foot buffer is encroached. In this case, more than one method of perimeter control is employed or a super duty perimeter control method may be required to adequately protect the surface water.

Perimeter controls have been known to trap amphibians, reptiles, and small mammals within a construction area. Of concern is the inadvertent harm to rare species. Inspectors of perimeter controls should move rare species out of harm’s way if they appear trapped or are in imminent danger. If not in danger, they should be left alone. In areas of known rare species populations, silt fence may also be helpful in keeping these animals out the construction area. In all cases it is critical that silt fencing be removed after the area has been re-vegetated. More information on Minnesota’s rare species can be found on the DNR website

Floating curtain is not perimeter control 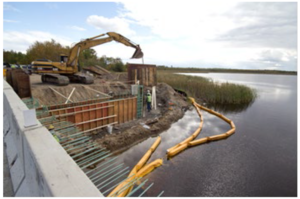 Frequently, floating silt curtains are employed during work in water. However, it is important to note that floating curtains will not satisfy MPCA’s NPDES/SDS Permit requirement for down gradient perimeter control. Even if a floating curtain is utilized, down gradient perimeter control must still be installed between the work and the surface water to prevent sediment from entering the surface water. A nuisance condition (as described in Minn. R. 7050.0210 sub. 2) caused by allowing sediment runoff into the water body is a water quality violation.

Floating silt curtain is not designed to prevent sediment from entering surface water. It is designed to help contain suspended sediment within the water column until it has settled to the bottom of the water body. Therefore, floating curtain’s only use may be for work that cannot be done outside the water or as a secondary containment to minimize the impact of a water quality violation and keep the damage to the water body near the shore and the sediment recoverable. 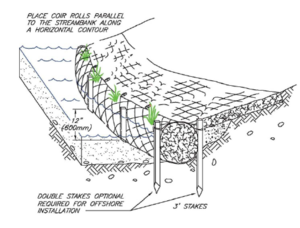 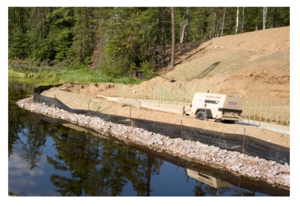 Move perimeter controls up the bank as the bank is stabilized

Additional information on the use of perimeter controls; including use of floating silt curtain, water diversions, coffer dams and other perimeter control BMPs for work in or near waters as well as all other applications can be found in the MPCA Protecting Water Quality in Urban Areas – Manual