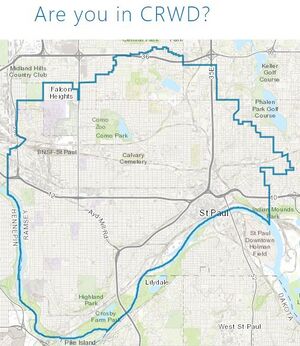 A modern challenge faced by organizations of all sizes and scales is to ensure the programs and services they provide are accessible to all people. The Minnesota Pollution Control Agency (MPCA) defines environmental justice as policies which strive for the fair treatment and meaningful involvement of all people regardless of race, color, national origin, or income with respect to the development, implementation, and enforcement of environmental laws, regulations, and policies. Within this context, fair treatment means that no group of people should bear a disproportionate share of the negative environmental consequences resulting from industrial, governmental, and commercial operations or policies.

Capitol Region Watershed District (CRWD) is 40 square miles and spans portions of the Cities of Falcon Heights, Lauderdale, Maplewood, Roseville and Saint Paul. CRWD serves a highly diverse population of residents, and population trends show that the district is becoming more racially and ethnically diverse over time. Between 2000 and 2015, the percentage of people of color in the City of Saint Paul, which comprises 85% of CRWD, increased from 36% to 46%. Across Ramsey County, this percentage increased from 13% in 2000 to 30% in 2014. These trends are expected to continue through 2040.

In 2010, CRWD Board and staff created a diversity and inclusion statement acknowledging the need for a more thoughtful and strategic approach to CRWD’s diversity and inclusion work in an effort to better engage all of CRWD’s residents. In 2018, with the help of a Minnesota GreenCorps Member (link to MPCA's GreenCorps website), CRWD analyzed hundreds of grant-funded projects and found significantly less program participation in the central and eastern portions of CRWD including the Trout Brook, Saint Anthony Hill and Phalen Creek subwatersheds. These subwatersheds correspond to areas of racially concentrated poverty (ACP50) defined by Metropolitan Council as 40% or more of the residents live with incomes below 185% of the federal poverty threshold and 50% or more of the residents are people of color.

To proactively address environmental justice issues within the watershed district, CRWD established a Diversity Committee in 2016 and developed the following goals in preparation for creating its first Diversity Strategic Plan:

Throughout implementation of the Diversity Strategic Plan, CRWD at times has run into barriers requiring flexibility and reevaluation of specific goals and outcomes. Making inroads into new communities takes time. CRWD has found that meeting audiences where they are by making intentional efforts to participate in community events (for example, participation in cultural events that are not explicitly connected to water management) is one meaningful strategy to introduce CRWD’s programs and projects to underserved communities. In addition, CRWD looks to communicate its programs and projects in ways that resonate with the intended audiences, including translating materials, amplifying the work of partners through storytelling and sharing, and incorporating the arts and technology into community engagement efforts.

CRWD has also learned that to succeed in being a diverse and equitable organization, it is important to hire staff and consultants that reflect the communities they serve. Staff has been working with partner groups to strengthen programming that educates and empowers young people of all backgrounds to pursue careers and higher education in natural resource fields.

An important lesson CRWD learned is that progress related to environmental justice issues does not always materialize in a linear way, and a key part of moving forward and advancing goals is embracing that journey, making progress without knowing what to expect and appreciating that some strategies may fail. The key is to learn from them and to make improvements.