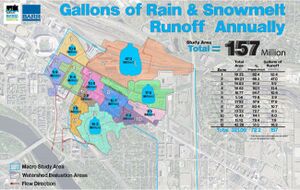 MWMO developed a water budget for subwatersheds within the Towerside Innovation District to help identify opportunities for district stormwater management. 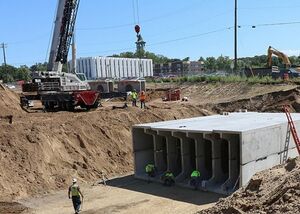 A 207,000-gallon cistern was constructed underneath the stormwater park biofiltration basin to store filtered runoff for eventual reuse. 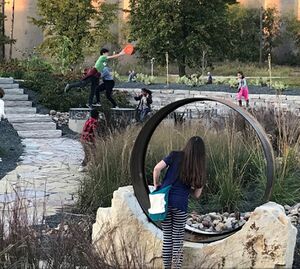 The stormwater park biofiltration provides a neighborhood gathering space and informal playground in between rain events. 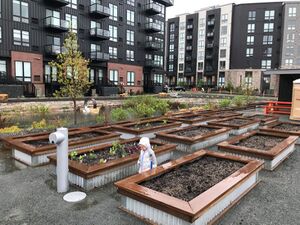 The 370-acre Towerside Innovation District is a rapidly developing area adjacent to the University of Minnesota and encompasses portions of Minneapolis and Saint Paul. Beginning in 2013, the Mississippi Watershed Management Organization (MWMO) (working with Barr Engineering Co. and Bruce Jacobson from the Minnesota Design Center) evaluated the feasibility of providing district stormwater management to create stormwater treatment and harvest and reuse opportunities.

As a result of the feasibility study, MWMO and Barr collaborated with four private developers to design and construct a system to manage stormwater runoff from an 8-acre area in the City of Minneapolis adjacent to the Prospect Park Green Line Light Rail Transit station. MWMO developed a district stormwater system that treats all the runoff from the four developments, exceeding the City of Minneapolis stormwater treatment requirements. The design includes stormwater conveyance systems from private developments to the district stormwater system, pretreatment in a sump manhole with a SAFL Baffle as well as an artful concrete sediment forebay, two large biofiltration basins (rain gardens) to filter out pollutants, an underground concrete tank under a biofiltration basin to store the treated stormwater, and a treatment and pumping system to enable the stormwater to be reused for irrigation by the private developers and the Minneapolis Park and Recreation Board (MPRB). Most of the district system was completed in 2016 with the treatment system completed in 2020. The initial construction cost of the district system totaled approximately $1,300,000, of which $430,000 represented the reuse treatment, pumping, and an enclosure for the treatment system that provided significant park recreation benefits.

Creating a district system allowed stormwater to be managed more efficiently in two centralized locations rather than encumbering developable land on each parcel, thus incentivizing and maximizing development opportunities in this growing community. All told, the stormwater system treats runoff from four multi-family housing developments and a grocery store representing approximately a quarter billion dollars in economic investment and providing more than 1,000 housing units. The housing includes affordable, senior, and market rate units.

The district system also facilitated the creation of an artful stormwater park that provides pollinator habitat and that is used for passive recreation in the stormwater basin itself in between storm events. The stormwater park, completed in 2016, is open to the public at all times, and has facilitated an expansion of the public realm through the construction of the adjacent MPRB park (the newest MPRB park, temporarily named Towerside Park) in 2019. The stormwater park and MPRB park are visually seamlessly integrated, and the stormwater from the district system is treated by a filtration and UV system located in a new building within the MPRB park that also serves as a covered picnic pavilion and provides storage for the community garden. The treated stormwater provides irrigation for a pollinator-friendly “bee lawn” in the MPRB park as well as the community garden itself.

MWMO is operating and maintaining the district system for the first 5 years, after which the system will be collaboratively owned and operated by the benefitting landowners. Since 2016, MWMO has hired a landscaping company to perform annual maintenance of vegetation in the biofiltration basins, clean out pretreatment features, and winterize the stormwater reuse system.