In 2000, 80% of the Phalen lakeshore was in a highly degraded state. Shoreline areas were composed of various blends of rip-rap, invasive weed species, turf grass, and bank slumping that was dangerous in areas and aesthetically unappealing to view. In 2001, the Ramsey-Washington Metro Watershed District, City of St. Paul, Minnesota Department of Natural Resources and other partners began a five-year lake shoreland ecological restoration project. The overall goal was to reintroduce diverse Minnesota native plant shoreland communities in areas that were experiencing moderate to severe erosion due to human disturbance and stormwater inflows into the lake. 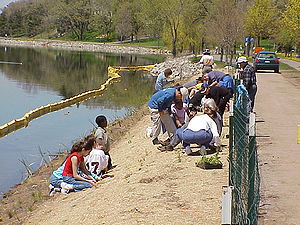 Influxes of stormwater into a lake system can cause changes in hydrology and increases in nutrient concentrations that have the ability to increase shoreland erosion, reduce native plant diversity, and favor weedy invasive plants (e.g., reed-canary grass, purple loosestrife, and hybrid cattail) along the shore. To combat erosion, especially in developed watersheds, the standard shore management tool has been the addition of rock—a hard armoring technique. Although this approach is often effective at reducing erosion and slowing soil loss, the downside is that the quality of shore habitats critical for fish and wildlife usually decreases. Numerous government agencies and individual shoreland owners are opting to use native plant communities to stabilize shores instead of the more traditional approaches like rock rip rap and sea walls. The main selling points of ecological restoration are that shoreland habitats and aesthetics are enhanced, natural vegetated buffers have the ability to improve water quality, and in most instances plants are cheaper than rock.

Lake Phalen is a 200-acre urban-residential lake located in a St. Paul city park. It is one of the most popular parks in the Twin Cities metropolitan area, receiving approximately one-half million visits each year. Bike and walking trails encircle the entire lake, fishing is popular from shore and by boat, and it is the only public swimming beach in St. Paul.

Immediately after park acquisition in 1899, wetlands along the shore were filled to create open turf spaces to the water’s edge, and a base for roads and pathways. Historical city documents report that “dredge material is used for filling low, marshy land adjacent to the lakeshore, and these now unsightly places are being converted to lawn spaces.” These disturbances spurred shore erosion and beginning in 1910, rock rip rap was used as a fix.

In the 1940s, the Phalen watershed began its conversion from agricultural to residential land use. By the late 1990s, over 95 percent of the watershed was developed. With the change in land use, the frequency and magnitude of flood events have increased on Phalen. In certain drainage areas within the watershed, stormwater is routed directly into the lake. Shorelines are more susceptible during high water events to erosion from wave action. By 2000, this type of erosion was common along numerous shore areas. Bank slumping accelerated by high water periods caused steep drops that created serious hazards to park patrons. Certain pathway segments were also in danger of collapse.

A restoration plan was developed that called for over 1.2 miles of degraded shore to be restored using various methods that rely on native vegetation for shore stabilization. For each shore restoration segment, upland, wetland transitional, and emergent zones were designed.

At the start of the project, Watershed District staff approached local schools and described the project as a unique opportunity to teach about water management and ecological restoration in an urban setting. Students learned about lake ecology, shore restoration, and watershed concepts, and then had a chance to dig in the dirt and install native plants. Since 2002, civic and school groups have donated approximately 75 percent of the labor used in this ecological restoration. 1,500 local school students from thirteen schools clocked close to 3,000 volunteer hours, and over 70 adults contributed greater than 500 hours assisting with education efforts and field exercises.

Photos illustrating the west shore of Lake Phlaen before, during and after restoration

A variety of re-vegetation approaches were tried in the transitional and emergent zones. Along the shore, rock berms and coconut rolls (i.e., biologs) were installed to protect young plantings from wave action. Synthetic and biodegradable erosion control blankets were used along the toe of the slope. A variety of custom grown plant material was used, including pre-vegetated erosion control blankets (2 meters x 3.5 meters), smaller pre-vegetated blanket mats -- 0.3 meters x 0.5 meters (pv-mats), 1-gallon containers, and 4 inch pots. Time of planting was varied and survival rates monitored. Of the three main community types included in the natural buffers, the emergent zone has presented the most challenge in Lake Phalen. This is due to water level fluctuation from stormwater inputs, wave action, human disturbance, and muskrat. In the transitional and emergent zones, 1-gallon containers and pv-mats had the highest rates of survival. Bulrush (Scirpus sp.) had good establishment and expansion via rhizomes when pv-mats were used. In some areas supplemental planting was necessary when a particular planting method showed marginal results. Lake access points – limestone steps down to the water - were incorporated into most restoration segments. This increased safety and also reduced the amount of foot traffic in the natural buffer areas.

Five years of activities has resulted in reaching the project goal of restoration of 1.2 miles of shoreland and improvements to riparian habitat and aesthetics. The community has accepted and been very involved in the project. Over eighty native plant species have become established across all three of the planting zones and erosion has been reduced to normal levels. Casual observation has suggested that certain fish and wildlife species are using the restoration areas. For instance, bluegill (Lepomis macrochirus) have constructed numerous spawning beds amongst 2-year old hard-stem bulrush. Leopard frogs (Rana pipiens) have colonized a 3-year old wet meadow transitional zone and are often detected swimming along the water’s edge. Surveys prior to the shore restoration project indicated that frogs were extremely rare along the shore. Great blue heron (Ardea herodias) and other wading bird species are commonly seen feeding on small fish associated with newly established sedges and bulrushes. Butterflies and bees are now a common sight in the transitional and upland plant communities.

The limestone access areas have become popular stopping points for walkers, fisherman, and for kids that just want to play in the water. Citizens from neighborhoods around the lake are in touch with this exceptional resource by learning about the ecosystem and the restoration project in the classroom, and by assisting with a variety of field exercises. Local newspapers and television news programs have featured this project, highlighting ecological lakeshore restoration as a new approach to combating the longstanding problem of erosion, in part, due to watershed characteristics and stormwater inputs.

The total cash outlay for the 5-year restoration was close to $350,000, or approximately $50 per linear foot of shoreline. Costs were kept low with generous in-kind contributions from project partners and a substantial input of student volunteer hours. Without these in-kind contributions, it is likely that this restoration would run closer to $100 per linear foot. The traditional approach using rock rip rap to reduce erosion would cost approximately $150 per linear foot and not address habitat and aesthetic issues.

Long-term monitoring is planned to evaluate the various shoreland restoration techniques used, and to determine maintenance needs. A study to assess vegetation communities of restored shoreland areas is currently being conducted by a University of Minnesota graduate student. Five shoreland segments on Lake Phalen will be quantitatively sampled in the summer of 2005. Results will be compared with other shore restoration sites being evaluated in the Twin Cities metro area. The study will help determine the success of restoration methods, identify maintenance requirements for a variety of shoreland habitats, and determine which suites of native plant species establish well in lake systems with developed watersheds. Watershed District and the City of St. Paul staff and volunteers are committed to maintaining the restored shore segments in order to ensure that the natural buffers properly establish and remain high quality over time. A certain level of continued maintenance and monitoring are necessary in ecological restorations residing in urban-residential watersheds.