Information: This case study from the original Stormwater Manual (2005) discusses actions taken primarily in the 1990's. The City of Minneapolis continued to implement stormwater practices since the completion of this case study. With data spanning several decades, it is now possible to determine water quality trends. The Minneapolis Park and Recreation Board completed a report in 2013 that discusses water quality in the city's lakes. Water quality analysis indicates water quality improved in three of the five lakes comprising the Chain of Lakes (Calhoun, Harriet, and Cedar), while no trend exists for Lake of the Isles and Brownie lakes.

The Minneapolis Chain of Lakes consists of (from the top of the watershed downstream) Twin Lakes, Brownie Lake, Cedar Lake, Lake of the Isles, Lake Calhoun and Lake Harriet). It is located 2.5 miles southwest of downtown Minneapolis. Decades of intense recreational use, urban development, and stormwater inputs had slowly degraded the lakes’ water quality. 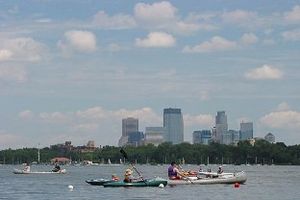 Photo showing kayakers on a lake in the Minneapolis Chain of Lakes. The lakes are used by millions of residents and tourists each year.

In 1990, the Minneapolis Chain of Lakes Clean Water Partnership (CWP) was formed to address the water quality problems the Chain of Lakes were facing. From the beginning, citizen participation has been at the core of the CWP management process and was vital to the overall success of the project. The Chain of Lakes Water Quality Management Citizens Advisory Committee (CAC) was formed and used a consensus-based process to develop a management plan that included water quality goals and recommendations that were submitted to the Minneapolis Park and Recreation Board. 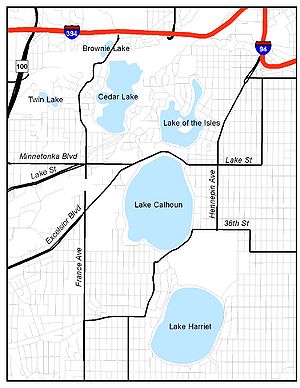 Map showing the location of the Minneapolis Chain of Lakes

The primary focus for long-term management was to reduce the amounts of total phosphorus and sediments reaching the lakes from watershed sources. Targeted reduction amounts were defined by the CAC and set to achieve specific recreation-based water quality goals (water clarity, fisheries, avoidance of algal blooms, etc.)

As a first step, state-of-the-art continuous computerized monitoring of the largest storm sewer inlets and outlets was performed. These were reduced into pollutant loads using FLUX and BATHTUB models to simulate lake water quality.

In order to achieve the desired lake goals, a series of strategies were developed for a multi-pronged campaign including

Physical rehabilitation efforts began in 1995 in the upper watershed reaches of the system and progressed downstream through the chain of lakes to lower areas of the watershed. Three water quality measures were followed: lake transparency, total phosphorus, and concentrations of chlorophyll a.

In 1996, Twin Lakes was dredged. Three wet sediment basins and a new wetland treatment for water quality polishing were constructed near Cedar Lake. Significant sediment and nutrient loads were being transported through Twin Lakes and into Cedar Lake. In a small park upstream of Twin Lakes, a 5,808 cubic yard wet volume pond was constructed.

The Cedar Meadows pond, a two-celled wet pond with a total wet volume of 18,069 cubic yards, was constructed across from Cedar Lake. An earthen berm divides the sedimentation cell from a created wetland cell, but problems were encountered with the carp population migrating into the wetland so additional fish screen barrier was put into place.

In 1998, construction of the three-celled Southwest Calhoun ponds (26,781 cubic yards) commenced adjacent to Lake Calhoun. The first cell was a sedimentation pond while cells 2 and 3 were designed to look like wetlands. Significant landscaping including a walkway and observation area and riparian buffer were added to this high-traffic site to make it a park amenity.

Moving downstream, erosion prevention and mitigation measures were implemented on areas of eroded shores in Cedar Lake, Lake of the Isles, Lake Calhoun, and Lake Harriet. Alum treatments were conducted in these same for lakes at different times during the period of 1996 to 2001. This treatment was followed by the installation of numerous grit chambers, pocket wetlands, and housekeeping changes.

Funding for the CWP initiatives has come mainly from local partner sources.

Over the past 15 years, the CWP initiatives have accomplished approximately $12.4 million in rehabilitation actions. This is believed to be one of the largest urban lake restoration projects in the nation. These efforts have been rewarded by a statistical improvement of the water quality in Lakes Cedar, Harriet, and Calhoun.

Public education campaigns have seen an over 50 percent reduction in pesticides in stormwater runoff from the contributing watershed. Alum treatments have locked up the accumulated historical phosphorus in lake sediments and treatment ponds have resulted in the reduction of new phosphorus loading into the system. Stormwater treatment ponds range from a 25 percent removal rate to a 66 percent removal rate and measurable changes have been seen in a relatively short period of time.

Intensively used resources need substantial resources dedicated to maintaining them each year. They also need to be intensively managed. Continued monitoring, operations, and maintenance to the popular Chain of Lakes will continue well into the future.