Mn/DOT wanted to construct a project to add a bituminous bike trail and parking area within the old right-of-way of historic Trunk Highway 61 near the Silver Creek Cliff Tunnel on the North Shore of Lake Superior. The project area had a number of significant constraints for implementing traditional construction Best Management Practices (BMPs). These constraints included: its location in a historic viewshed; the presence of rare, threatened, and endangered plants and animals at the site; direct stormwater drainage to Lake Superior (a special water of the state); and poor soils with close proximity to bedrock. These all combined to make design and implementation of temporary and permanent stormwater management for this project a unique challenge.

Information: This page was created for the original Stormwater Manual in 2005. Information may be outdated. 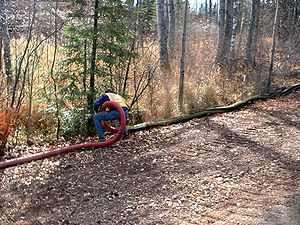 The old roadbed of Trunk Highway 61 is located on the outside of the Silver Creek Cliff Tunnel and is considered to be a historic roadway. As such, a project to preserve the area and provide safe public access to it was proposed through construction of a pedestrian trail and parking area.

Site constraints in the project area made implementation of traditional stormwater management techniques impractical and unfeasible for the site. All stormwater from the project drains through multiple exit points to Lake Superior, which has prohibited and restricted discharge areas and a special water of the state. Peregrine falcons have established nesting areas in the rock face above the trail site, so the project had to avoid disturbing the birds during their critical nesting season. Rare plant species were identified at the toe of the slope requiring a design configuration of the project to avoid impacting them. The design also had to complement the historic nature of the site itself and not obstruct or adversely alter the historic viewshed of the lake. Stormwater management was further complicated by underlying soil materials, since this area is dominated by exposed rock and thin soils. 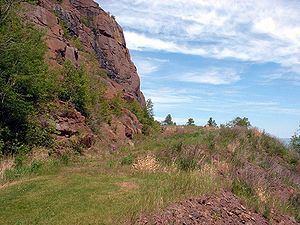 An important step early in the project planning process was the development of a detailed Stormwater Pollution Prevention Plan ( SWPPP). Since site constraints did not allow for implementation of traditional stormwater management techniques, an Alternative Treatment proposal for permanent stormwater management was developed for the area. The Alternative Treatment proposal was included in a hybrid SWPPP that also addressed temporary erosion and sediment control techniques to be implemented during construction. This hybrid SWPPP utilized the feasible and appropriate portions of the normal SWPPP, but added an operational component to the SWPPP with special provisions for time of year, water quality treatment and rapid stabilization. 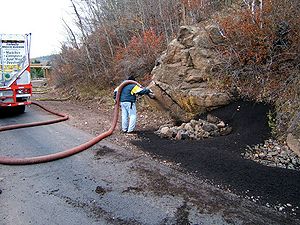 Photo showing addition of a soil amendment for rapid vegetation and stabilization.

Stabilization was required within 3 days in areas with 1:3 or steeper slopes and within 7 days in areas flatter than this. The rapid stabilization plan utilized compost filter logs for perimeter control, ditch checks, and field inlet protection, and bioretention swales designed to meet the requirements. Temporary erosion control practices included in the hybrid SWPPP described rapid stabilization procedures for ditches, inlets, outlets, and ditch checks within 1 day and plans included detailed descriptions of where each stabilization standard applied on the site. Since a typical living swale could not be designed to meet stormwater treatment requirements with the soil features at the site, a compost bioswale system was designed for water retention, filtration and nutrient capture. This bioswale was developed for water quality treatment using known parameters of leaf and grass clipping feedstock compost.

Construction timing was planned to be outside of the peregrine falcon nesting season (after July 15th, 2004) and DNR personnel checked the nesting sites to ensure that the birds had vacated them before construction was allowed to begin. Rare plant impacts were avoided by design alterations for construction of a bridge in the area rather than the more common practice of blasting the rock and adding slope fill for the trail. Impervious surface reduction and increases in vegetation were enhanced by compost additions to thin topsoils.

Permanent erosion control practices included a 2 inch thick compost blanket, slow release fertilizer and a system of vegetated swales and drainage filters for the parking lot inlet. Compost filter logs were also used as post-construction stormwater controls as the filter logs vegetated over time, and a special seed mix was developed for the project.

The project resulted in an overall reduction of impervious surface area and an increase of vegetation along the trail.

The techniques used for this project were very successful at addressing both temporary and permanent stormwater management and erosion and sediment control in shallow soils and bedrock areas with unique constraints. This project will be used as a model for future projects in areas with similar conditions.