Green Lake and Nest Lake are economically important recreation areas near the City of Spicer. The expansion of State Highway 23 to a four-lane facility will go through the city of Spicer and the environmentally sensitive Green Lake/Nest Lake recreational area. Due to economic importance, the highway’s proximity to the lakes, the abundance of wetlands in the area, and limited space for stormwater treatment in the highway right-of-way, stormwater management and water quality issues were controversial. 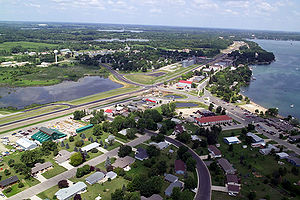 The City of Spicer lies in an area rich in aquatic resources including many lakes, streams, and wetlands. Tourism based on the natural environment is an important component of the economy of the area. Maintenance or improvement of the water quality to support activities such as fishing, swimming, and boating is a high priority. Stormwater runoff and nutrient loading into Green Lake especially was a major issue for this important recreation feature.

The entire area is experiencing rapid growth. Highway 23, which runs through the city is seeing increased congestion and traffic accidents especially during peak travel weekends and holidays in the summer. In late 1995, the Highway 23 Task Force was formed to promote improvements to the highway corridor. Members felt that a four-lane connection from Willmar to I-94 would improve the capacity and safety of the roadway and foster economic development opportunities in Willmar and the adjacent areas of New London and Spicer. The Minnesota Department of Transportation (Mn/DOT) completed a corridor study in 1997, which identified a need for this four-lane connection from Willmar to New London.

In 1998, a natural resource assessment process began. The location, quality and priority of all wetlands, lakes, and prairie remnants were inventoried and identified which helped to guide the placement of the roadway alignment. Mitigation opportunities were developed by an interagency team including specialists from Mn/DOT, the Department of Natural Resources (DNR), Kandiyohi County, U.S. Fish and Wildlife, and private consultants. Their recommendations focused on opportunities that would enhance the natural resources within the Green Lake drainage area.

The results of a 1998 Scoping Study revealed that the best option would be to expand the roadway on the existing alignment. The Environmental Assessment process was completed in 2000 and detail design and right-of-way acquisition occurred in 2001-2002. Construction on the project began in 2003. 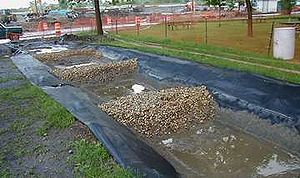 In 2001, a Water Quality Advisory Committee (WQAC) was formed through a joint agreement with Mn/DOT, DNR and the Minnesota Pollution Control Agency (MPCA). Seventeen members representing stakeholders from a variety of agencies, municipalities, and community organizations met 25 times in 2001 and 2002 to discuss water quality and stormwater management issues. The function of the group was to review Mn/DOTs stormwater management strategy and to reach consensus on how to address water quality and water quantity impacts related to the reconstruction of Trunk Highway 23 through Spicer. Significant water quality impairments existed in the urbanized areas due to stormwater runoff from pollutant discharges into lakes, wetlands and other resource concerns.

The focus of the WQAC was to develop a water quality plan the met the goals of no net increase of nutrients flowing into area lakes and if possible to decrease these nutrient flows. Green Lake, adjacent to the project was widely recognized for its water quality, sport fishery, and recreational importance and was a focus for protection. The activities of the WQAC functioned to assist and advise Mn/DOT’s Detail Design Team as they prepared detailed water quality and maintenance plans which would sustain the area’s water resources through nutrient and stormwater management and also to evaluate options and develop recommendations to be incorporated into the design. 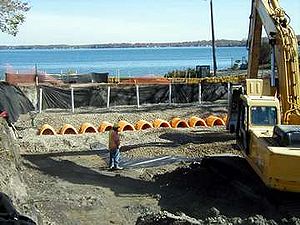 A variety of site-specific strategies for the corridor including settling and retention ponds, vegetated drainage swales, filtration and infiltration systems and sediment traps were ultimately agreed upon. A water quality mitigation plan was developed and finalized in 2002 that treats all stormwater runoff from the highway corridor prior to discharging to receiving water bodies. Mn/DOT District 8 has been pursuing potential wetland restoration opportunities so that the outcome is a high priority and targeted location, not just the closest land available. This strategy worked well to alleviate some of the constraints of identifying suitable mitigation areas within the narrow project right-of way.

The plan provides treatment for all runoff from Highway 23 as well as incorporating several large areas of downtown Spicer that were not previously receiving treatment. It was estimated through water quality modeling that approximately 26 pounds of phosphorus per year was contributed by Highway 23 into Green Lake pre-construction. 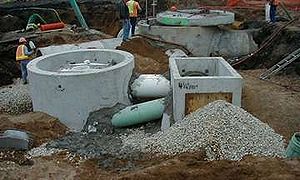 Project construction is projected to be completed by the end of 2005. After completion, it will undergo post- construction stabilization and monitoring. With the reconstruction of the highway and redirection of runoff to treatment methods, an anticipated 23 percent decrease in phosphorus loading into Green Lake (down to 20 pounds per year) is anticipated. The project has met its goal of no net increase and is expected to result in a decrease in nutrient loading due to the treatment provided in previously untreated areas of Spicer.

The formation of a committee of this magnitude was unusual for transportation projects in Minnesota. The structure of the WQAC allowed for technical investigations of issues as they developed, a holistic approach to stormwater management and local stakeholder involvement. The resulting water resources plan was one of the most innovative and encompassing plan packages produced by Mn/DOT and can be used as a model for future local and statewide roadway projects.

A minimum of yearly inspections to all components of the stormwater management system will be conducted. Grit chambers will be cleaned out as necessary but at a minimum of twice yearly. Periodic maintenance will be performed on the settling basins and ponding areas to ensure continued proper functioning.