View this section as a separate page

This section of the CMP presents evaluations of chloride water quality conditions in the TCMA considering:

This information is intended to help inform management decisions such as where and when to focus monitoring efforts and where to prioritize implementation activities. 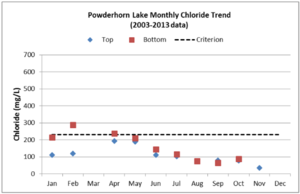 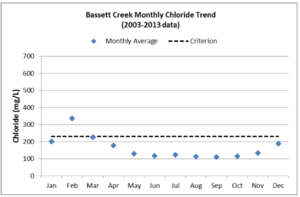 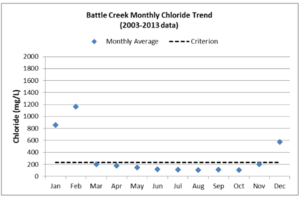 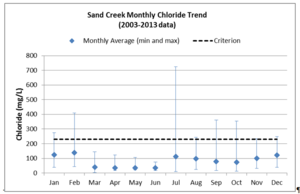 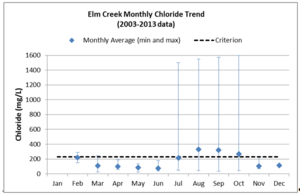 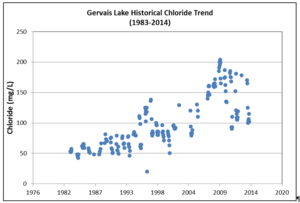 Long-term statistical trend analyses require a long, mostly continuous, monitoring record. Sufficient data were available in EQuIS to conduct long-term statistical trend analysis for 11 of the impaired lakes and 9 of the high risk lakes in the TCMA. Trends were determined using the Season Mann Kendall Trend Test with R Statistical Software and are presented in the Long-term chloride trends in lakes in the TCMA table. Lakes with a minimum of 10 years of data were analyzed and only samples collected from the surface were used in the analyses. Fourteen lakes showed a significant (p < 0.05) increasing trend in chloride and eight lakes did not have a significant trend. The Increasing chloride concentration in surface samples in Gervais Lake from 1983-2014 chart shows an increasing trend in chloride concentration in Gervais Lake. The other lakes in the Long-term chloride trends in lakes in the TCMA table showed similar trends.

The Metropolitan Council 2013 Stream Water Quality Summary for the TCMA found that current chloride concentrations within the St. Croix, Minnesota, and Mississippi River basins are at levels higher than the 10-year average (2004-2013).

A multiple regression using both the year and the number of snowfall events in a winter season (precipitation equivalent > 0.01”) as the independent variables showed the strongest potential to predict average winter chloride concentrations. Waterbodies with 10 years of data (2004-2013) and a relatively strong correlation over this period include Powderhorn Lake, Wirth Lake, Bassett Creek, and Nine Mile Creek. The results of the multiple regression analyses are presented in the table below. The results show that average winter chloride concentrations are increasing between 9.7mg/L per year and 19.3 mg/L per year for these waters, though Bassett Creek did not exhibit a significant correlation to year. Average winter chloride concentrations increase between 2.9 mg/L and 7.9 mg/L for every additional snowfall event. Tests of significance for these correlations demonstrated that there is meaningful correlation, though the limited dataset of 10 years results in a fairly wide range in confidence intervals for the coefficients and intercepts. 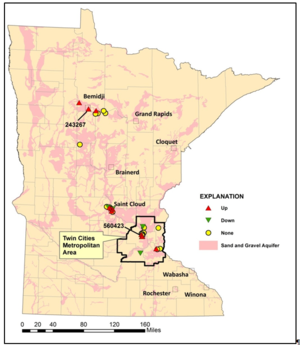 Shallow groundwater will eventually either discharge to surface waters or move down to deeper aquifers that contain water that is used for Minnesota’s drinking water supplies. If continued trends of increasing chloride in shallow groundwater persist, higher concentrations in deep aquifers will eventually occur, which could result in higher water treatment costs or restrict its use for drinking water supplies (MPCA, 2013).

Upward trends in chloride concentrations were not just restricted to shallow wells that tapped the sand and gravel aquifers. Concentrations also significantly increased in two deep wells in the TCMA. One of these wells was 190 feet deep and tapped the Jordan aquifer in the vicinity of Cottage Grove. The other well was 72 feet deep and tapped a buried sand and gravel aquifer in Hennepin County. The Cl/Br ratios in both of these wells; 803 and 822, respectively; also was considerably greater than those expected in groundwater unaffected by human-caused contamination. In these two wells, chloride concentrations increased on average 1.8 mg/L each year. This translated into an increase of about 15-30 mg/L over approximately the past 15 years. Concentrations in the Jordan aquifer well increased from about 12 mg/L in 1999 to 41 mg/L in 2011, and concentrations in the buried sand and gravel aquifer wells increased from about 30 mg/L in 1996 to 46 mg/L in 2011 (MPCA, 2013). 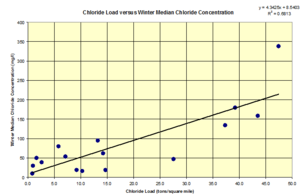 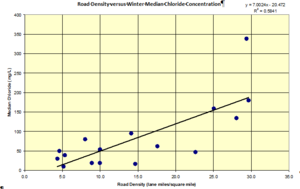 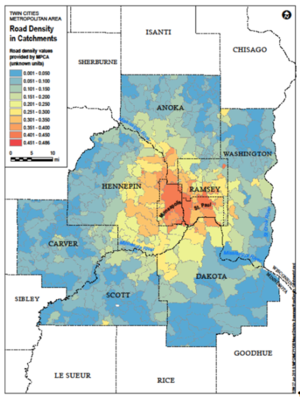 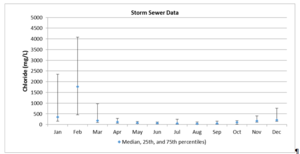 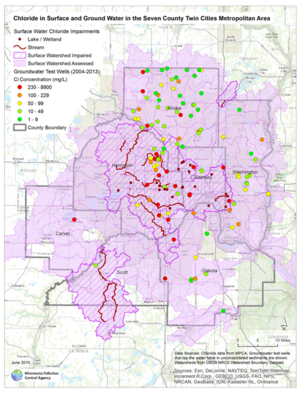 Chloride in Surface and Ground Water in the TCMA 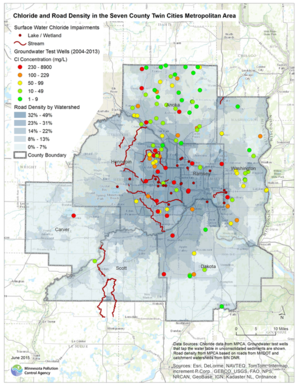 Chloride and Road Density in the TCMA 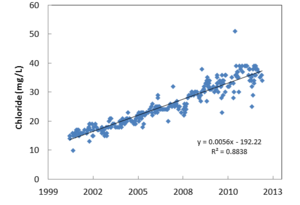 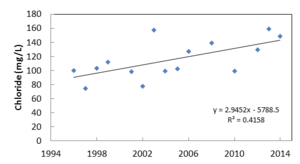 In comparison to chloride samples taken from lakes, wetlands, and streams, the area’s stormwater runoff contains some of the highest chloride concentrations found in the TCMA. The data indicates a high degree of seasonal variability, which is a result of winter maintenance activities and the direct connection to impervious surfaces. Storm sewer chloride data was collected in the TCMA from 1980 through 2013. Sample set sizes ranged from 19 to 288 samples per month, for a total of 1,569 samples. The data indicate that high chloride concentrations are found during the winter maintenance season and increase as the winter season progresses with the peak occurring in February

Chloride relationships between surface and groundwater

Concentrations of chloride in shallow groundwater are increasing. Shallow groundwater contributes flow to lakes, wetlands, and streams. In the TCMA, average chloride concentrations in shallow monitoring wells located within watersheds that contain one or more impaired surface waters were higher (141 mg/L) compared to wells in watersheds without an impaired lake, stream, or wetland (48 mg/L).

Several studies of streams in the Upper Midwest have found that higher chloride levels in shallow groundwater have, in part, contributed to an increase in concentration in streams during low flow conditions, when stream flow is dominated by groundwater inputs (Kelly 2008; Eyles et al. 2013; Corsi et al. 2015). This pattern of increased chloride concentrations during low flow conditions, typically during the summer months, is also evident in streams in the TCMA. Chloride concentrations exceeding the 230 mg/L standard have been observed in Bassett Creek in June and Shingle Creek in August. This issue is not isolated to the TCMA. For example, chloride levels in Miller Creek, a trout stream located in Duluth, have also consistently exceeded the 230 mg/L standard in July and August.

Shingle Creek, a tributary to the Mississippi River, is an urban stream that runs through Brooklyn Park, Brooklyn Center, and Minneapolis. The creek typically has numerous exceedances of the 230 mg/L standard each year, particularly during winter months. However, average chloride levels in the stream during summer months have also increased over time (Figure 28). The estimated increase in average summer (July through October) chloride concentration in Shingle Creek from 1996 to 2014 was 53 mg/L, based on a linear regression. The increased chloride concentrations in Eagle and Shingle Creek, and likely many other streams in the TCMA, suggest that chloride from deicing activities is infiltrating into shallow groundwater, resulting in elevated chloride concentrations in streams during summer baseflow conditions.

Based on the water quality data collected and the above data analyses, the following conclusions can be made: