The TMDLs were developed for each of the lakes, wetlands and streams in the TCMA impaired by chloride. A TMDL quantifies the allowable pollutant loading to a lake or stream that will result in water quality standards being attained. The WQT for the TMDLs was set to the chronic water quality criterion for chloride of 230 mg/L. The total allowable load, or the TMDL, is allocated to the various sources contributing chloride as well as a MOS and, in general, a RC. The TMDL equation can be written as:

Several approaches were considered for developing the TMDLs. A simple 0-dimensional, steady-state modeling approached was selected through consultation with the Technical Advisory Committee for calculating the allowable load from runoff, including the permitted MS4 areas and non-permitted areas. This approach assumes that chloride from winter maintenance activities and all other sources eventually makes its way to surface waterbodies through runoff. This approach was chosen for the following reasons: 1) chloride is a conservative substance and is in the dissolved phase in the water environment; therefore, complex fate and transport assessments are not needed; 2) determining the time for a system to respond to reduced chloride loads was not necessary to inform the TMDL or the CMP; and 3) the large number of lakes and streams needing a TMDL and the limited data available for a significant portion of them prohibited a more complex approach. This approach assumes eventual complete flushing in an impaired waterbody over the long-term.

The WQT for the waterbodies included in this TMDL is Minnesota’s chronic water quality standard for chloride, 230 mg/L. On this basis, the TMDL components were calculated as described below, with additional discussion following later in this section. It should be noted that the “WLA for MS4 areas” and “LA for runoff from non-permitted areas” are exclusive and do not overlap.

Reserve Capacity (RC) = set to zero for this TMDL

In light of the above, the Metro Area chloride TMDL is more explicitly expressed as below: 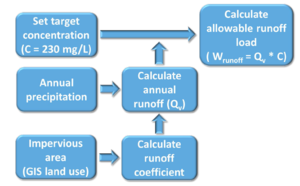 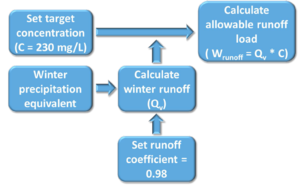 A slightly modified approach was taken for the streams. The streams tend to exhibit the highest chloride concentrations during the spring snowmelt, which is then flushed through the system. The approach was modified to account for frozen ground conditions and seasonal runoff volume. The runoff coefficient was adjusted to 0.98 over the entire tributary watershed area to account for frozen ground conditions. The seasonal runoff volume is considered to be the total precipitation equivalent for the period from November 1 through March 31 (season is 151 days per year). This period is typically when salt is being applied and is expected to accumulate and run off during the spring snowmelt (as well as occasional winter melts). A seasonal precipitation equivalent for the period of November 1 through

This approach was used to determine the loading capacity for streams. The calculation is shown below.

Where: P = Seasonal precipitation water equivalent (6.29 inches/season for the TCMA)

A categorical WLA has been established for the permitted MS4s within each impaired watershed. The runoff loading capacity L, after deducting the natural background and 10% MOS, was split between the permitted and non-permitted parts of the watershed in simple proportion to their runoff volumes.

Wastewater source discharges were included in the WLA where applicable. The allowable load for treatment facilities within an impaired watershed was set to the expected discharge or design flow of the facility multiplied by 230 mg/L of chloride and a units conversion factor as follows: WLA = 0.012 x Q x C

The WLAs for regulated construction stormwater (MNR10001) were not developed since chloride is not a typical pollutant from construction sites.

Permitted entities located in more than one chloride impaired nested watershed; therefore, receiving multiple WLAs for chloride will be required to meet the most stringent downstream WLA. This approach assumes that by achieving the most stringent WLA all the others will also be met.

An aggregate LA has been established for the non-permitted watershed runoff sources within each impaired watershed. This consists of townships, cities, counties, and MnDOT outside of the urban boundary and not covered under an MS4 permit. This aggregate LA includes winter maintenance activities in these areas as well as other potential sources including runoff from agricultural lands where fertilizer containing chloride may be applied, and the impact of septic systems on shallow groundwater and recharge.

This LA was calculated by the 0-dimensional modeling equation for the portions of the watershed that are outside the permitted MS4 areas. MOS and LA (natural background) were then subtracted out to get the LA (categorical non-permitted entities).

The MOS is the component of the TMDL allocation that accounts for uncertainty within the calculation methods, sample data, or the allocations which will result in attainment of water quality standards. For the purposes of developing the TMDLs for each lake, wetland and stream, an explicit 10% MOS was selected. This MOS was based on best professional judgment considering the potential variability of the monitored parameters from spatial, temporal, and seasonal changes seen within each lake and stream. Also, an explicit 10% is a reasonable estimate consistent with many other TMDLs prepared by the MPCA. It is reflective of the uncertainty in the data and the modeling. Almost all completed TMDLs for lakes in Minnesota make use of a 0-dimensional model and an explicit 10% MOS is typical. Implementation of the TMDL relies on an adaptive management approach that will revisit whether on-going efforts and the TMDL targets are sufficient to restore impaired waters.

The TMDLs developed for lakes, wetlands and streams consider chloride sources from both seasonal sources, such as spring snowmelt and runoff, as well as continuous year-round sources of chloride such as the WWTPs. Historical loadings from salt application to impervious areas present in shallow groundwater may contribute chloride to surface waters throughout the year. See the TCMA Chloride TMDL - Watershed and Waterbody Characterization section of the TCMA Chloride Management Plan for more information about the impacts of chloride to groundwater. The TMDL for lakes assumes lake water quality responds to loadings on an annual or longer term basis. Therefore, the TMDLs for lakes have been developed to achieve an annual average daily load. Some impaired lakes indicate a seasonal trend, with higher chloride concentrations in winter and early spring. The MOS helps to protect for these seasonal variations. Continued monitoring and adaptive management will also be needed to ensure the TMDL is protective of the waterbody.

Chloride loadings to streams vary seasonally. Stream water quality responds to loadings on a seasonal basis and the highest chloride concentrations tend to occur during the spring snowmelt. Therefore, the TMDL has been developed to achieve compliance for the winter and spring snowmelt period.

A summary of the TMDLs is presented in the Summary of TMDL and Components for Impaired Lakes and Wetlands in the TCMA table below for lakes and wetlands and the Summary of TMDL (lbs/day) and Components for Impaired Streams in the TCMA table for streams. The TMDL for each waterbody including the individual MS4 and other wastewater source discharges within the WLA are presented in Appendix A-4.


Link to this table