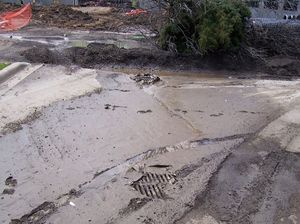 Example of poorly managed construction site. Runoff from the street will be heavily laden with sediment and include pollutants attached to the sediment. 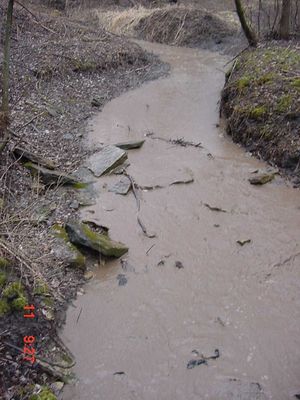 Photo of a stream heavily impacted by sediment from stormwater runoff. Also note the exposed stream banks, which suggest scouring and erosion associated with flooding events.

What is stormwater and stormwater runoff? The water on earth constantly cycles between liquid, gas, and solid states. As part of the water cycle, water vapor in the air condenses and falls as rain and / or snow. When that rain or snow hits the ground it is called “stormwater”. Stormwater, including melted snow or ice, eventually does one of the following:

Stormwater runoff is the portion of stormwater that runs off to a surface water. Many factors affect how much of the stormwater will run off, including the following.

Why does stormwater need to be managed? Over the past century or so we have built homes, roads, shopping centers, commercial buildings, and so on, all of which dramatically increased the amount of impervious surface. At the same time, we have modified the landscape to facilitate rapid drainage of stormwater runoff from our developments. This has had the effect of concentrating the stormwater runoff and decreasing infiltration. This causes three problems.

We can minimize or reduce these negative impacts through proper management of stormwater. Examples of management strategies include the following.