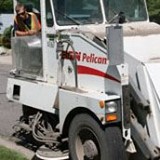 A barrier encountered by the City early in development of their street sweeping program was related to material testing (i.e., when should collected street sweeping material be tested, how often, and what to do with contaminated materials). After years of operations, the City found the spring sweepings were almost always contaminated, primarily with diesel range organics. Due to the low cost-benefit of screening collected material and limited storage capacity for screened material, the City now ships and landfills all material collected during spring operations. Sweepings collected outside the spring season have not been considered contaminated.

More information regarding the City of Roseville’s street sweeping operations can be found on their municipal website, or by contacting Ryan Johnson, Environmental Specialist, City of Roseville Engineering Department (Ryan.Johnson@cityofroseville.com).