This site is currently undergoing final review. For more information, open this link.
This page is in review 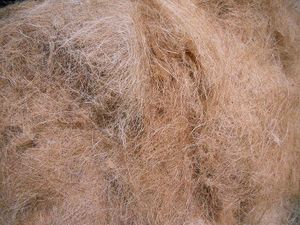 Coconut (Cocus nucifera L.) pith or coir, the mesocarp of the fruit, is a waste product that has potential benefits in growth media, including engineered media used in stormwater applications. Coir dust is peat-like and consists of short fibres (< 2 cm). Coir has a large surface area per unit volume, is hydrophilic, and therefore has the ability to absorb water. It's primary components are lignin and cellulose, each making up about 45% of coir's dry weight. Water soluble fractions typically account for about 5% of coir, by weight (Ministry of MSME, Government of India, 2016; Alam, accessed from https://textilelearner.blogspot.com/2014/01/properties-of-coconutcoir-fiber.html on 2/13/20).

Applications for coir in stormwater management

Coir has potential applications for stormwater management. Below is a brief summary.

This section includes a discussion of chemical and physical properties of coir, and potential contaminants in coir.

There are few concerns with contaminants in coir. For coir prepared with saline solutions, sodium and chloride will be elevated and possibly at levels of concern for plants if the coir is not washed. Polyphenols and phenolic acids in coir can be phytotoxic and inhibit plant growth when coir is used without other amendments such as fertilizer or compost (Ministry of MSME, Government of India, 2016). Metal concentrations are well below Tier 1 Soil Reference Values. Organic contaminants, such as polycyclic aromatic hydrocarbons, are not a concern.

In this section we provide information on effects of coir on pollutant attenuation and on physical properties of soil and engineered media.

There are limited studies on coir retention of phosphorus at concentrations typically found in stormwater runoff (less than 0.5 mg/L). Adsorption studies show that phosphorus adsorption at higher concentrations (greater than 1 mg/L) occurs through ion exchange and chemisorption being mechanisms for adsorption, with sulfate competing with phosphate for adsorption sites)(Takaijudin and Ghani, 2014; Kumar et al., 2010; Namasivayam and Sangeetha, 2004).

Shrestha et al. (2019) studied phosphorus leaching from columns containing mixtures of soil, compost, spent lime, and coir. Using tap water with no detectable phosphorus, they observed that adding coir (10% by weight) to a 70-20 soil-compost mix did not decrease phosphorus leaching compared to an 80-20 soil-compost mix. Similar results were observed for media with 40% compost. Hongpakdee and Ruamrungsri (2015) observed reduced phosphorus leaching at the flowering stage, possibly due to increased plant vigor and uptake in treatments containing coir. Herrera Environmental Consultants (2015) conducting flushing and leaching experiments for a variety of media mixtures, including mixtures containing coir. Mixtures of coir and granular activated carbon (GAC) or ash showed orthophosphorus concentrations of 0.021 and 0.052 mg/L, respectively, when flushed with solutions containing less than 0.004 mg/L. For leaching experiments, influent orthophosphate concentrations were 0.323 mg/L and effluent concentrations for coir-GAC and coir-ash mixtures were 0.025 and 0.164 mg/L, respectively. However, the researchers attributed retention of phosphorus to the GAC and ash rather than coir. The researchers also observed decreasing orthophosphorus leachate concentrations with time.

Pure coir is not suitable for plant growth. It has a high C:N ratio (>100) and a high lignin content, resulting in slow decomposition and immobilization of plant nutrients. In addition, polyphenols and phenolics acids in the coir can be phytotoxic and inhibit plant growth (Ministry of MSME, Government of India, 2016).

When composted and added as an amendment to a growing media, coir improves plant growth, with coir outperforming peat in several studies. In the absence of composting, nitrogen and phosphorus additions will likely be necessary, depending on plant requirements. Calcium and magnesium additions may also be needed. Concentrations of other nutrients and micronutrients are generally acceptable for most plant species (Cresswell; Asiah et al., 2004; Noguera et al., 2003; Abad et al., 2002; Meerow, 1997; Lodolini et al., 2017; Hongpakdee and Ruamrungsri, 2015; Small et al., 2015; Scagel, 2003; Arachchi and Somasiri, 1997). Noguera et al. (2003) showed that, based on generally recommended plant specifications, 0.25-0.5 mm diameter coir particles appear most suited for plant growth, with some addition of larger particles recommended. Abad et al. (2005) similarly recommended a mix of particle sizes.

Recommended specifications for coir when used in a growing media are shown in the adjacent table and include the following.

Coir should be composted or incorporated into media containing a nutrient (N and P) source, such as compost. Alternatively, liming or addition of microorganisms may enhance decomposition of coir, which subsequently aids in release of nutrients from the coir. The Ministry of MSME, Government of India (2016) provide a discussion of different composting materials and methods, including specifications.

References containing specifications are provided below. Note that most of these references include information on the packaged material (e.g. bags, blocks, briquettes), such as weight and size.

Distributors of coir for use in bioretention media (e.g. horticultural use) can readily be found on the internet and we do not make specific recommendations. When purchasing coir, the following questions should be asked.

Packaged coir is typically tested and meets specifications as described above. Standardized testing does not appear to exist for coir, but several methods for testing different characteristics appear to be appropriate.

The following references provide information on testing of coir.

There are few handling concerns. Dust may be an eye irritant. Examples of material and safety data sheets can be found at the following links.

Coir dust is a sustainable alternative to peat. Historically, little coir has been utilized and has therefore been disposed as a waste. Prabhu and Thomas (2002), for example, estimated that in India alone, 1.5 million tonnes of coir pith could be obtained annually but only 500,000 were produced at the time of their study. More recently coir production in India has been estimated at about 1 million tonnes annually (Ministry of MSME, Government of India, 2016). Studies are underway to expand existing markets and develop technologies for manufacturing coir dust from coir fiber (Praveenkumar and Agamoorthi 2017; Varma, 2018).