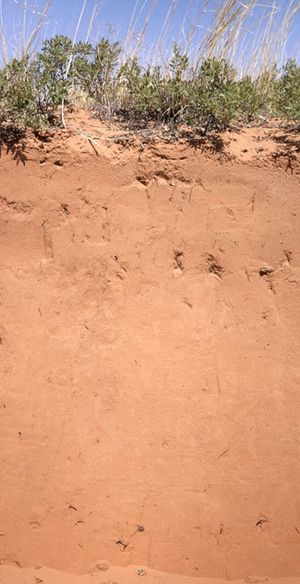 Example of a coarse-textured soil in which attenuation of pollutants will likely be minimal. Source: USDA.

The primary concerns with infiltration rates above 8.3 inches per hour are (1) a diminished ability to attenuate pollutants due to the relatively short contact time between the soil and infiltrating stormwater and (2) a higher potential for rapid contaminant transport to groundwater systems (e.g., in the event of chemical spills).

Caution: Because of the site-specific nature for amending soils, this page offers general guidance on amending soils rather than a specific approach.

Although slowing infiltration rates to less than 8.3 inches per hour via soil amendments can allow for installation of infiltration systems that help meet permit water quality volume Vwq retention requirements, it also has the potential to create problematic conditions. One of the most common complications of amending soil is decreasing the infiltration rate so much that it becomes unacceptably slow. This is often caused by the introduction of fine-grained materials which become clogged in the native soil. Subsequent consequences of clogging the soil may include failure to meet 48 hour drawdown time requirements and killing vegetation that was not intended for prolonged inundation. Another complication is the potential for the soil amendment to serve as a pollutant source. For example, certain amendment media such as compost can export soluble phosphorus in higher concentrations than the incoming stormwater runoff, thus contributing to increased phosphorus loading.

The first step in developing a soil amendment plan involves understanding the baseline conditions of the native soils where the amendment will be performed, including the following.

Soil samples should be taken in close proximity to the infiltration test locations.

Depending on the site-specific conditions determined from the first step, the soil amendment plan should define one or more of the following.

Compost and topsoil are the most commonly used soil amendment media. Minnesota’s specifications for use of these materials should be followed:

When calculating the volume of soil amendment material needed, the following should be taken into consideration.

Implementation of the soil amendment construction procedure needs to ensure the appropriate volume of amendment is used and that the mixing process results in a consistent, heterogeneous media across the entire site to the proper depth (typically 12 to 18 inches). The mixing process can be accomplished by either:

The specified construction procedure must also ensure that common complications are prevented, and may include the following.

What rate should I use if I follow the procedure?

If the above procedure is followed, we recommend one of the following: