The median measured infiltration rate should be utilized for design. Soil pits should be dug during the design phase and should be a minimum of two feet in diameter for measurement of infiltration rate. Infiltration testing in the soil pit can be completed with a double-ring infiltrometer or by filling the pit with water and measuring stage versus time. If the infiltration rate in the first pit is greater than 2 inches per hour, no additional pits shall be needed. 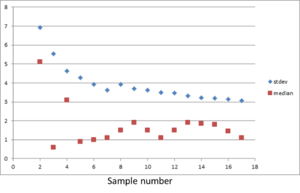 Caution: Select the design infiltration rate from the table based on the least permeable soil horizon within the first 5 feet below the bottom elevation of the proposed infiltration practice

Warning: The measured infiltration rate shall be divided by a safety factor of 2.