Information: The methods described on this page were developed by University of Minnesota researchers as part of a study to develop a street sweeping credit methodology. See the U of M report. 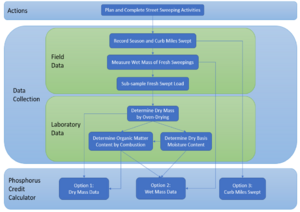 Street sweeping decision tree and process of data collection for phosphorus credit with the Calculator.

This page describes methods for sampling street sweeping material including determination of wet mass, dry mass, dry basis moisture content, and organic matter. The most accurate way to account for phosphorus reduction from street sweeping would be to measure phosphorus in the sweeping load directly. However that is both technically complicated and prohibitively expensive on the scale of municipal sweeping events. Therefore, alternative field and laboratory measurements may be conducted to approximate the phosphorus load captured by street sweeping.

A decision tree which maps out the actions and data collection activities to employ in using the phosphorus credit calculator are shown in the adjacent figure. Additional information on the credit calculator tool and how it is used may be found in the tool itself and the accompanying user guide.

Schematic of street sweeping calculator showing where to enter miles swept. Click on image to enlarge.

The simplest measurement that can be used for input into the Credit Calculator is the length of curb miles swept. One curb mile is equivalent to a sweeper-width pass along one side of a street. If both sides of a one-mile long stretch of roadway are swept (1 road mile), that distance is equal to 2 curb miles. To calculate the phosphorus reduction from miles swept, simply input the miles swept into Option 3 of the calculator, as shown in the adjacent image. 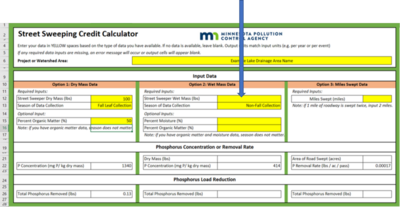 Schematic of street sweeping calculator showing where to enter wet mass. Click on image to enlarge.

If using the wet mass method, after the street sweeping event has occurred, the wet mass of the entire sweeping load should be measured. This is typically conducted using either of the following methods:

1. Some street sweeping vehicles are equipped with an internal scale which informs the driver of the weight of material in the hopper. This weight is considered the wet mass.
2. Calculating the difference in mass between the empty street sweeper vehicle before and after the collection event.

a. Weigh the sweeper vehicle with an empty hopper prior to sweeping, including the fuel that will be used during sweeping. This is typically conducted using a whole vehicle scale, or fixed or portable wheel scales. This is the vehicle mass.
b. Weigh the sweeper vehicle after returning from sweeping, this is vehicle gross mass (vehicle + fresh sweepings + remaining fuel).
c. Calculate the mass of fuel used during sweeping and subtract this from the total full truck mass after returning from sweeping.

Accounting for vehicle fuel mass consumption may be a rough estimate because vehicle fueling is typically tracked per day (and not by sweeping operation). Fuel mass consumed during each sweeping operation can be estimated based on the duration of vehicle operation. An average fuel consumption rate was approximated based on field data from Prior Lake, MN which was conservatively approximated as 4.85 gallons per hour (Kalinosky et al. 2014). Using a fuel density of 6.943 pounds per gallon for diesel fuel, the weight of fuel consumed may be computed for each sweeping operation using the driver reported total time of vehicle operation.

d. Subtract the mass of fuel consumed and the vehicle mass from the total full truck mass after sweeping (vehicle gross mass). The result is the wet mass of sweepings.

The sweeping load wet mass may be entered directly into the Credit Calculator, or additional measurements can be made to determine dry mass by measuring dry basis moisture content, and/or additionally measuring organic matter content.

Laboratory-based methods for calculating phosphorus reductions include dry mass measurement and measurement of organic matter. Each of these requires load sampling. These are discussed below.

Although we were unable to find a video specific to subsampling from a sweeper pile, the following videos provide general information about collecting subsamples.

Methods:
1. After the sweeper load wet mass has been determined, dump the sweeper load onto a tarp for subsampling.
2. It is important to collect a single representative sample from the sweeping load. Visually assess the sweeping load pile, examining how much of the load is composed of soil and plant debris. If sediment comprises a significant portion of the debris, it may settle at or near the bottom of the pile. This should be considered when determining where to collect subsamples.
3. Before sample collection, label a gallon-sized storage bag with sample identification information (e.g., street sweeping route, date).
4. Wearing protective gloves, use a trowel to scoop at least five (5) small amounts of sample into the gallon bag. Walk around the pile, scooping from various locations. Make sure to collect a sample that accurately reflects the composition of the sweeper pile (e.g., in proportion to observed fine sediments and coarse materials). Scrape away the outer layer of the pile, which may be dry, to collect samples from within the pile with a more representative dry basis moisture content, avoiding large pieces of trash and woody debris. Small pieces of trash are not separated from the sample (anything less than 1 inch in size).
5. Collect sufficient sample to fill the gallon bag approximately three-fourths (¾) full.
6. Seal the gallon-sized storage bag well.
7. Samples should be stored in a refrigerator until dry basis moisture content determination. If dry basis moisture content cannot be determined within one (1) day, the sample must be frozen. 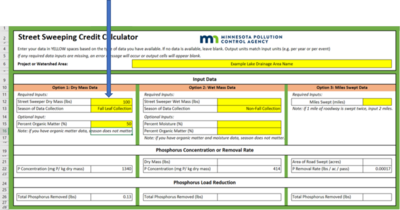 Schematic of street sweeping calculator showing where to enter wet mass. Click on image to enlarge.

The dry mass of the sweeping load may be estimated within the street sweeping Credit Calculator using measured load wet mass and an assumed seasonal average dry basis moisture content, or dry mass may be determined based on additional laboratory measurements. The dry mass may be calculated using laboratory analyses to determine dry basis moisture content. In order to complete laboratory analyses of subsamples of the street sweeper load, first a representative subsample must be collected from the representative load sample collected following the Representative Load Sampling Procedures described above.

Note: If the representative load sample is submitted to a commercial laboratory for analysis, provide these SOPs to the lab and ensure they provide the metrics needed for the tool (wet mass, dry basis moisture content (not wet basis percent moisture), and/or organic matter content).

Schematic of street sweeping calculator showing where to enter organic matter. Click on image to enlarge.

Because of the strong relationship between percent organic matter (OM) and total phosphorus observed in street sweeping, determination of OM can be used to refine the calculation of phosphorus removed from a given sweeping event. OM concentration of sweepings can be calculated using the Loss-on-Ignition (LOI) method, whereby a sample is combusted in a muffle furnace and the percentage of material combusted is assumed proportional to the percentage OM and/or organic carbon in the sample. It is recommended that the following methodology for determining OM content be completed and analyzed on three (3) separate subsamples to obtain an average percent OM value that is representative of the sweeping load.

Percent organic matter is given by