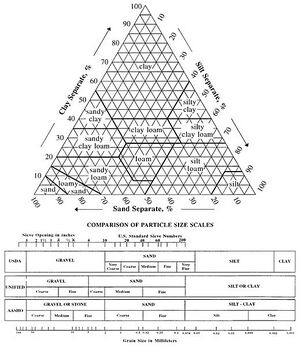 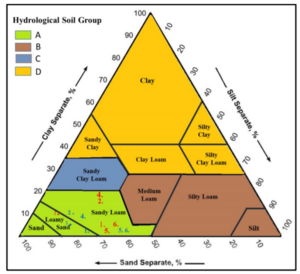 Soils are typically classified based on a specific property, such as infiltration or texture. This page provides a summary of the more commonly used classification systems.

USDA classification based on soil textures

Texture affects many soil properties, such as infiltration, structure, porosity, water holding capacity, and chemistry. For more information on the role and importance of soil texture, link here.

The soil texture triangle is based on grain size, that is the distribution of sand, silt, and clay in a soil. The texture triangle is shown in the adjacent image. The relationship to hydrologic soil group, which is used in stormwater applications, is illustrated in this image.

This classification system is the most widely used system in the Minnesota Stormwater Manual and in most stormwater applications in the U.S. Best management practice (BMP) selection and design are typically based on soils at a site. For example, infiltration bmps are preferred on HSG A and B soils when there are no other site restrictions (e.g. contamination, presence of active karst).

Link to infiltration rates based on hydrologic soil group

The Unified Soil Classification System (USCS) (see ASTM D-2487) is used in engineering and geology to describe the texture and grain size of a soil. Unconsolidated materials are represented by a two-letter symbol based on type of material (gravel (G), sand (S), silt (M), clay (C), organic (O)) and grading or plasticity (well-graded (W), poorly-graded (P), high plasticity (H), low plasticity (L)). For example, CH materials consist of clay with high plasticity, and SP materials consist of poorly-graded sands. Specific properties of these soils can be found here. This classification is used for engineering applications, where factors such as soil strength and uniformity are important for structural applications.

The adjacent image shows the relationship between the USCS, AASHTO and USDA classifications.

The AASHTO Soil Classification System was developed by the American Association of State Highway and Transportation Officials, and is used as a guide for the classification of soils and soil-aggregate mixtures for highway construction purposes. It roughly divides soils into two groups, granular and silt-clay materials, based on sieve analysis. Granular materials are considered good as a subgrade, while silt-clay materials are less satisfactory.

The adjacent image shows the relationship between the USCS, AASHTO and USDA classifications. 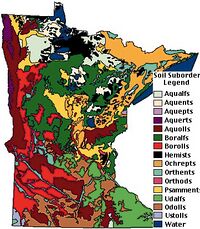 USDA soil taxonomy provides a classification of soil types according to several parameters (most commonly their properties) and in several levels: Order, Suborder, Great Group, Subgroup, Family, and Series. There are currently twelve soil orders. Suborders are based on a specific property, such as temperature or moisture (e.g. aquic for wet) regime. The following soil orders occur in Minnesota.