Total Maximum Daily Load (TMDL) Wasteload Allocations (WLAs) approved by the U.S. Environmental Protection Agency (EPA) prior to the effective date of the MS4 General Permit (permit) must be addressed by Permittees in their Stormwater Pollution Prevention Program (SWPPP) Document. Specific permit requirements are found in section II.D.6 and Section III.E of the Municipal Separate Storm Sewer System (MS4) permit. The permit requires municipalities that have an MS4 permit, discharge to a receiving water with a TMDL that was approved by the EPA prior to 2013, and indicated that they are not meeting their waste load allocation to report their progress toward meeting the WLA every year. The MPCA received TMDL reporting forms from 78 permittees. Permittees must update the reporting form with each Annual Report. We used data collected through 2015 to develop this page.

Caution: PLEASE READ BEFORE PROCEEDING ON THIS PAGE 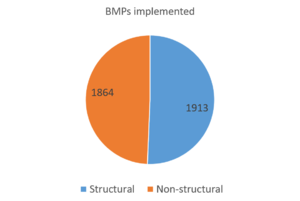 BMPs implemented through 2015, by type (structural or non-structural) 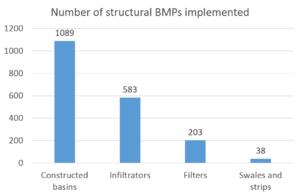 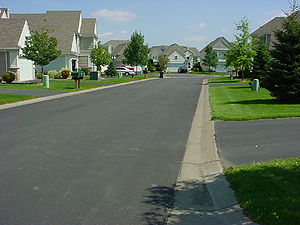 An example of a narrow street from Woodbury, Minnesota. Reducing street width reduces the amount of pollution on impermeable surfaces and is therefore an effective pollution prevention practice.

Non-structural activities include a wide range of activities, most of which are encompassed within the 6 minimum control measures. Examples include education, training, street sweeping, and pollution prevention. Pollutant load reductions associated with non-structural BMPs are difficult or not possible to quantify. Properly implemented, however, they will lead to reductions in pollutant loading. The following analysis is not particularly rigorous and the data could be mined for additional insight into the types of non-structural practices implemented by permittees.

Supplemental public education and outreach was the most common non-structural BMP, accounting for 33.4 percent of all non-structural BMPs. For this BMP category, the following specific practices were reported in the TMDL form.

Examples of workshops and clinics include the following:

Examples of publications include the following:

Presentations include a wide range of activities ranging from training to classroom presentations and staffed booths at events.

We created an Excel spreadsheet summarizing the supplemental education and outreach activities reported by MS4 permittees. The spreadsheet includes the permittee name, the reporting year, a BMP description, and notes. Note that these data were not required and the data fields are therefore not completely filled. 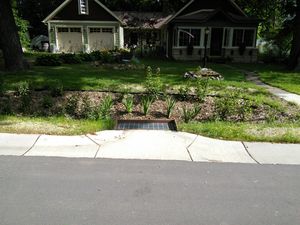 Manufactured devices cover a wide range of BMPs that are structural in nature but are difficult to quantify in terms of pollutant reductions. The practices are often considered pretreatment and often require frequent maintenance to effectively remove pollutants. Manufactured devices accounted for about 19 percent of non-structural practices reported in the TMDL form.

The terminology for these practices may be somewhat overlapping and dependent on what a particular permittee calls the practice. The most common practices cited were drain inlet inserts, sump manhole, grit chamber, SAFL baffle, manufactured filter, and hydrodynamic separator.

Although manufactured devices were the second most cited non-structural BMP category, they were included in only a handful of reporting forms. The City of Plymouth, for example, listed 206 drain inlet inserts in the report. The cities of Brooklyn Center, Fairmont, Robbinsdale, and Rochester listed a total of 47 grit chambers. Sumps and sump manholes were list 52 times by eight different permittees. These devices are typically used for pretreatment, but the information in the reporting form does not allow determination of how these practices are used.

Supplemental street sweeping accounts for 9.8 percent of non-structural BMPs submitted in TMDL reporting forms. A total of 39 permittees included this as a BMP category. The following BMP descriptions were included.

Permittees listed street sweeping as the BMP description on 70 occasions. It is unclear if this comprises new sweeping in locations where sweeping previously did not occur.

Using the information provided in the reporting form, it is difficult to identify specific changes in street sweeping practices. There were some approaches noted that likely would be effective, including the following.

Supplemental employee education training accounted for 8.6 percent of non-structural BMPs included in the report forms. A total of 22 permittees included this as a BMP category. The following BMP descriptions were included.

Some of the notes included for this category are summarized below. 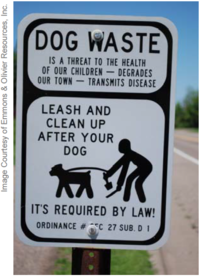 This BMP category accounted for 7.4 percent of non-structural BMPs reported. A total of 29 permittees included this as a BMP category. The following BMP descriptions were included.

The following Excel spreadsheet summarizes the information for this BMP category - File:Ordinances.xlsx

Several permittees reported improved turf management, which does not provide information about the specific activity implemented.

Stormwater reuse was cited by seven cities and included 3 ponds, 3 rain barrel programs, and one underground vault. These practices should be quantifiable if sizing information is known and the captured water is infiltrated or treated. The three stormwater disconnection practices could be included with these reuse projects.

The TMDL form includes information on load reductions for structural BMPs. Permittees had flexibility in choosing the method for calculating reductions. The following methods were used by permittees.

Reductions could be provided as a mass reduced (e.g. pounds reduced) or as a percent reduction in loading from a baseline condition. The first table below summarizes reductions in pounds for permittees that reported mass reductions. The data must be viewed with caution. For example, phosphorus reductions for the Lower Minnesota Dissolved Oxygen TMDL are very large. Further inspection of the data indicate indicates one permittee reported reductions of more than 5000 pounds based on cubic yards of material collected from street sweeping.

The second table provides reductions as a percent from a baseline condition. Percent reductions cannot readily be combined into an overall reduction since baselines may differ between permittees. The calculation can be made but has not been for this report.

This table shows load reductions reported by permittees in their TMDL reports.

Link to this table.

This table shows load reductions, as a percent reduction, reported by permittees in their TMDL reports.

Link to this table.

The following table summarizes the total number of non-structural BMPs reported for each TMDL project.

Number of non-structural BMPs reported, by TMDL project
Link to this table 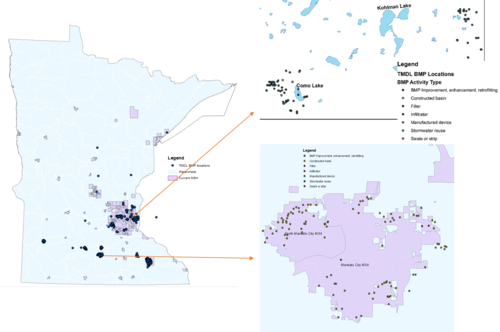 Statewide distribution of BMPs reported in TMDL forms. The figure also illustrates the type of BMP used in two specific areas. Click on the image to enlarge.

Permittees were required to include x,y coordinates for structural BMPs listed in the reporting form. The figure to the right illustrates the distribution of structural BMPs from all reporting forms. The figure also illustrates the types of BMPs reported for two specific areas. Note that the areas located in Capitol region Watershed District and Ramsey-Washington Watershed District include primarily infiltrators and filters as a result of watershed rules and limited space for building constructed ponds. This contrasts with the Mankato area, where constructed ponds are the primary BMP.

Similar figures could be used to illustrate the distribution of BMPs for specific watersheds that comprise TMDL projects. Using GIS, the BMP locations could also be associated with geologic or geographic features, such as soil type, built-out areas, karst areas, and so on. This type of analysis would allow determination of preferred BMPs based on these physical or social features.

Non-structural BMPs reported in the TMDL forms were not associated with geographic locations. Many of the BMPs, such as education or street sweeping, are implemented across the entire jurisdictional area of the permittee. BMPs such as manufactured devices could be associated with specific locations, but the high number of these devices make managing that data cumbersome.

Although there are some basic quality control issues with the data collected from the reporting forms, the data are highly useful. In particular, the following appear to be ways in which the data can be used.