View this section as a single page

Conceptual model of anthropogenic sources of chloride and pathways 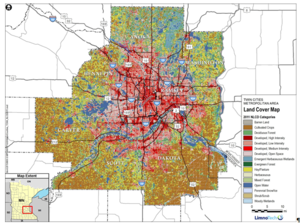 Chloride enters the TCMA lakes, streams, wetlands, and groundwater from a variety of sources. The relative significance of each source of chloride is dependent on the watershed. For highly developed urban areas, winter maintenance activities are typically the primary source. In less developed areas where point source discharges exist, the municipal wastewater treatment facilities may be the primary source of chloride, which in most cases is due to water softening. A conceptual model diagram of the primary anthropogenic sources is shown to the left. A chloride budget for the TCMA estimated that only 22%-30% of the chloride applied in the TCMA was exported out of the TCMA via streamflow in the Mississippi, Minnesota, and St. Croix Rivers (Stefan et al., 2008). Therefore, 70%-78% of the applied chloride remains in TCMA lakes, wetlands, and groundwater and it may also be stored in soil-water where infiltration is slow. Since chloride is an element and does not breakdown over time, the high percentage retained in the TCMA suggests that chloride will continue to accumulate and eventually make its way to the deep aquifers. This implies that, on average, chloride concentrations in the TCMA waterbodies are increasing with time. If the chloride loading remains steady, the concentrations will level out when equilibrium develops between loadings and transport out of the TCMA. By the same token, if loadings are reduced sufficiently and persistently, the chloride concentrations in the TCMA waterbodies will begin to decrease and will continue to decrease until a new equilibrium is reached. Each of these sources is briefly described below.

The land use map of the TCMA map, shown to the right, indicates land use in the TCMA is largely urban in the core of Minneapolis and St. Paul with a transition to rural and agricultural moving outward through the suburbs. The primary source of chloride may shift locally depending on land use. 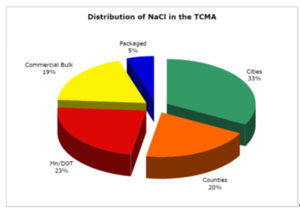 Distribution of NaCl in the TCMA (Figure adapted from Sander et al., 2007) 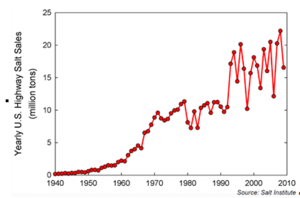 Winter maintenance activities include snow and ice removal. Application of deicing and anti-icing chemicals, primarily salt, is common. Salt is applied to a variety of surfaces including roads, parking lots, driveways, and sidewalks. Runoff from salt storage facilities is another potential source of salt. The St. Anthony Falls Laboratory at the UMN developed an inventory of salt uses in the TCMA for a Minnesota Department of Transportation (MnDOT) Local Roads Research Board study (Sander et al., 2007). The inventory estimated the total amount of salt used for winter maintenance activities in the TCMA, based on purchasing records, to be 349,000 tons per year. Estimates of use by various entities are shown in the Distribution of NaCl in the TCMA chart.

Salt sales data in the United States shows a dramatic increase in the amount of salt being purchased. Along with the increased use of salt, increasing levels of chloride in lakes, wetlands, and streams should be expected.

The TCMA is estimated to have over 26,000 lane miles of roadways (Sander et al. 2007). Application rates range from 3 to 35 tons of road salt, per lane mile, per year, based on the salt purchasing records and the number or lane miles of MnDot, counties, and cities in the TCMA (Wenck, 2009)

Commercial sources of deicing salt can vary greatly between different watersheds and includes salt applied to parking lots, driveways, and sidewalks on commercial property. The land owner or tenant may conduct winter maintenance activities, or winter maintenance may be contracted with private winter maintenance providers. Commercial sources are likely responsible for 10% and 20% of the total salt applied to paved surfaces in the TCMA (Wenck 2009). The MPCA and Fortin Consulting conducted research to validate and refine assumptions regarding commercial and private salt application rates specific to Minnesota (Fortin, 2012a). There is a range of reported application rates, which is to be expected, because rates should vary based on temperature, type of snow event, surface to where material is applied, number of passes over an area during an event, and type of material used. Application rates of salt on parking lots are estimated to range from 0.1 to 1 ton per acre per event, and typically 6.4 tons per acre per year. For sidewalks, the application rate is estimated to range from 8 to 25 pounds per 1,000 square feet per event (0.2 to 0.5 tons per acre per event). More area specific residential and commercial estimates of chloride usage can be determined on a watershed basis by digitizing all of the residential and commercial impervious surfaces and multiplying by the estimated application rates.

Review of available information and additional research included application rates from across the United States’ and Canada’s snowbelt, with an emphasis on Minnesota specific data. It was determined that an average rate of 6.4 tons per acre per event is the appropriate application rate to expect on parking lots. As a percent of the total deicing salt usage, it is estimated that anywhere between 5% and 45% is used for commercial applications (parking lots, sidewalks, residential, private roads). The amount of chloride from commercial sources is variable, and is dependent on the characteristics of the watershed, including the amount of impervious area. Additional estimates of commercial salt use are presented below.

Residential winter maintenance salt use has been estimated from purchasing records. Packaged deicer for home and commercial use is estimated to account for 5% of the total in the TCMA (Sander et al., 2007). See the Distribution of NaCl in the TCMA chart.

A Sidewalk Salt Survey was conducted to qualitatively assess the use of sidewalk salt by the general public in the TCMA. The survey was disseminated by local partners including RWMWD, MCWD, and MnDOT. The survey was administered through an on-line Survey Monkey link on the MCWD website (www.minnehahacreek.org) from November 2011 through March 2012. The survey was completed by 606 people online and 148 completed a paper survey. Approximately 47% of the respondents lived in St. Paul or Minneapolis, and other respondents lived in surrounding cities including Woodbury, Richfield, Plymouth, and Maplewood. Although the survey sampled 754 residents, the results represent a small percentage of the TCMA population and are non-random/voluntary; therefore, the survey is not representative of all residents in the TCMA. However, the data provide valuable information on the use of sidewalk salt by TCMA residents.

The majority of residents that responded to the survey used sidewalk salt (57%), particularly on sidewalks and steps. Most people selected products based on performance in colder temperatures and environmental safety. The majority of respondents did not know how much sidewalk salt to use (59%), and if they did know, they determined how much to use based on the instructions on the packaging or used as little as possible. For complete results of the survey see Appendix C.

Municipal wastewater, backwash from municipal WWTPs, and industrial facilities with waste streams may contain chloride. The primary source of chloride in a municipal waste stream comes from water softeners. Many cities do not soften drinking water before it is distributed to residents. Many residents soften the water in their home with personal water softeners. The most common water softening systems use NaCl or potassium chloride (KCl). Salt that contaminates the groundwater can enter the sanitary sewer system through cracks and/or leaks in the pipes and pipe joints. Industrial facilities that discharge to the municipal wastewater collection system can be another source of chloride. Some industries have chloride in their discharge due to the products they produce or chemicals they use (Henningsgaard, 2012).

Industrial facilities may discharge directly to surface waters following treatment or may discharge to a sanitary sewer system, which transports the wastewater to a wastewater treatment plant (WWTP) for further treatment prior to discharge to surface water. A range of industrial facilities discharge directly to waters that are already impaired by chloride, these include food processing facilities, manufacturing, pipeline terminals, biofuel facilities, and groundwater treatment systems. Discharges of chloride from municipal and industrial wastewater sources are covered by individual or general permits. Chloride data for wastewater and industrial sources is currently not widely available. However, chloride monitoring is being required for many facilities as permits are re-issued. As part of the TMDL component of this project, several facilities were identified that likely discharge chloride within the impaired watershed. A table listing these facilities and their location is shown in Appendix A-3. There are likely additional facilities with the potential to contain chloride in their discharge; however, since they are not contributing to an impairment they were not evaluated at this time. 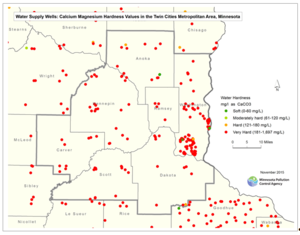 Hardness values of drinking water supply wells in the TCMA 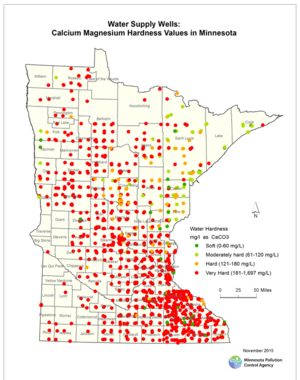 In areas with high hardness in the water supply, like the TCMA, residential water softeners that use salt are common. Hardness is a measure of the calcium and magnesium carbonate concentration in water. Most water softeners use chloride ions to replace the calcium and magnesium ions. Chloride from this salt is delivered to the environment either through discharge to a septic system or by delivery to a WWTP. Septic systems become more prevalent in the rural areas outside of the TCMA urban core. The chloride that comes from septic systems enters the shallow groundwater or local streams through subsurface flow. Chloride loading from any individual home water softener is dependent on many variables and is specific to the individual homeowner’s water chemistry, water use, hardness preferences, and softener efficiency. Estimates of the amount of salt discharged from residential water softeners in the TCMA are not available at this time. However, where the primary source of household water is hard and it is not softened by municipal water utility, residential water softeners are the primary source of chloride to WWTPs. The map to the right shows the hardness values of drinking water supply wells for the entire state of Minnesota. The Sand Creek watershed, located in Scott County of the TCMA, is an example where the primary source of chloride to surface waters is from water softening; chloride concentrations in WWTP effluent for three WWTPs located in the watershed average from 521 mg/L to 618 mg/L.

An on-going evaluation of agricultural drainage water quality done by North Dakota State University – Department of Agriculture and Biosystems Engineering indicates that chloride concentrations from agricultural drainage can range from 8.6 mg/L to 37.4 mg/L. (The results of this study have not been published).

Sources of chloride to TCMA lakes, wetlands, and streams other than those discussed above exist, but are considered to be small. One such source of chloride is the use of dust suppressants on gravel roads and parking areas. Chloride is a common constituent found at high concentrations in dust suppressants. Landfill leachate has also been shown to contain elevated levels of chloride (Mullaney et al., 2009). The use of aluminum chloride for treatment of lake sediments or ferric chloride for treatment of stormwater are sources of chloride and should be avoided in waters and watersheds with chloride impairments.