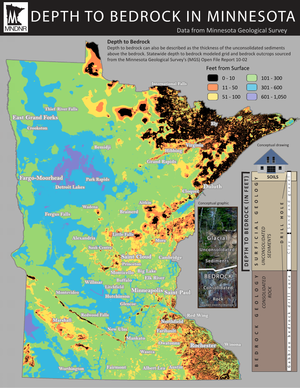 Sites with shallow bedrock are defined as having bedrock within 6 feet or less of the ground surface. Shallow bedrock is found in many portions of the state, but is a particular problem in the northeastern region. When installing an infiltration Best Management Practice (BMP), there must be at least 3 feet of separation between the base of the BMP and the bedrock per the Minnesota Construction General Permit (CGP). Bedrock at the 6 foot depth is a trigger to perform a geotechnical investigation to determine the location of the bedrock in the area in and around the proposed BMP to ensure the 3 foot separation can be achieved.

Why is shallow depth to bedrock a concern?

Shallow bedrock limits the depth of BMPs, reduces the potential for subsurface infiltration, and reduces the depth over which treatment can occur. These sites present challenges to stormwater management; however these challenges can be managed. General guidelines for investigation and management are presented below. Special caution for steep slopes and fractured bedrock is urged.

How to investigate for shallow bedrock

It is important to understand the general depth to bedrock over the entire site, but more specifically it is important to know the depth to bedrock in and around the area of the proposed BMP. Geotechnical investigations are recommended for all proposed stormwater facilities located in regions with shallow bedrock. The purpose of the investigation is to identify subsurface conditions which can pose an environmental concern or a construction hazard to a proposed stormwater management practice. Guidelines for investigating all potential physical constraints to infiltration on a site are presented in a table at this link. These guidelines should not be interpreted as all-inclusive. The size and complexity of the project will drive the extent of any subsurface investigation. 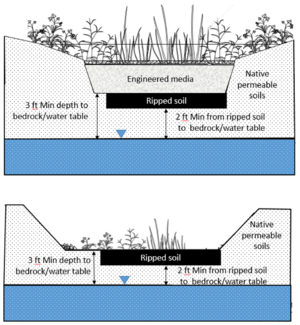 The investigation is designed to determine the nature and thickness of subsurface materials, including depth to bedrock and to the water table. Subsurface data for depth to groundwater may be acquired by soil boring or backhoe investigation. These field data should be supplemented by geophysical investigation techniques deemed appropriate by a qualified professional, which will show the location of the geologic and groundwater formations under the surface. The data listed below should be acquired under the direct supervision of a qualified geologist, geotechnical engineer, or soil scientist who is experienced in conducting such studies. Pertinent site information should include the following:

All material penetrated by the boring should be identified, as follows.

What are general stormwater management guidelines for areas with shallow bedrock?

The following investigations and guidelines are HIGHLY RECOMMENDED for infiltration and other BMPs proposed to be located in areas with shallow depth to bedrock.

The following table provides an overview of shallow bedrock and soil related design considerations for different structural practice groups. Guidelines for investigating all potential physical constraints to infiltration on a site are presented in the table at the bottom of this page.

Recommendations for structural BMP use in settings with shallow soils and shallow depth to bedrock.
Link to this table

1A liner is required under the Construction Stormwater General Permit.