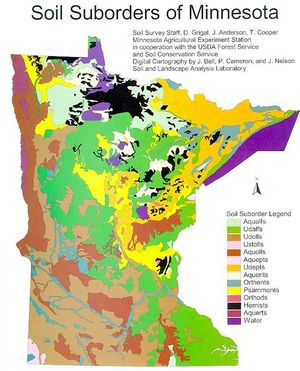 Statewide map of soil suborders. While soil infiltration rates vary widely within a soil order or suborder, infiltration rates tend to be lower on mollisols, histisols and vertisols compared to entisols, inceptisols, spodosols, and alfisols. Source: University of Minnesota 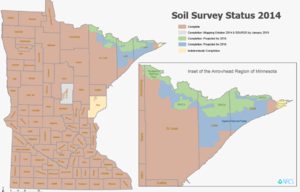 Soils with low infiltration capacity (tight soils) are defined as soils with steady-state infiltration rates equal to or less than 0.06 inches per hour. County soil surveys are useful for initial screening to identify soils that may have low infiltration rates. Most county soil surveys are available digitally from the NRCS (National Resources Conservation Service). These surveys are not accurate enough to determine site-specific characteristics suitable for infiltration systems but are useful for initial screening. If there is a potential for slowly infiltrating soils to exist on a site, a detailed site analysis should be performed for all proposed infiltration BMPs (Susilo, 2009). Additional information on soils can be found here.

Stormwater management limitations in areas with tight soils generally preclude large-scale infiltration and ground water recharge (infiltration that passes into the ground water system). These soils will typically be categorized under Hydrologic Soil Group (HSG) D. The table below provides a general summary of infiltration rates for different soils. These are conservative estimates of long-term, sustainable infiltration rates that have been documented in Minnesota. They are based on in-situ measurement within existing infiltration practices in Minnesota, rather than national numbers or rates based on laboratory columns.

Why are soils with a low infiltration capacity a concern?

Sites with low infiltration capacity soils may limit the type, location, number and/or sizing of infiltration BMPs that can be used for stormwater management. Low infiltration rates result in extended surface ponding of water, which may damage vegetation, lead to mosquito breeding, damage soil structure, and reduce pollutant treatment by the BMP. Certain watershed organizations in Minnesota do not allow the use, or strongly discourage the use, of infiltration BMPs where soil infiltration capacity is low. This does not mean, however, that these soils do not have any infiltration and recharge capabilities. It may be possible for sites to partially or fully meet infiltration objectives as long as appropriate design modifications have been incorporated, such as amending the soil with compost or sand, or incorporating an underdrain into the practice.

The following table provides an overview of design considerations for several groups of structural practices. 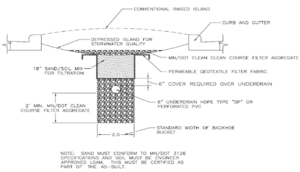 How to investigate soils with low infiltration capacity

Soil tests to determine infiltration capacity of soil should be performed at all proposed stormwater facilities that plan to have a recharge or infiltration component to their design. The purpose of the testing is to identify and confirm the soil characteristics and determine suitability, if any, for infiltration BMPs. Guidelines for investigating all potential physical constraints to infiltration on a site are presented in a table at this link. These guidelines should not be interpreted as all-inclusive. The size and complexity of the project will drive the extent of any subsurface investigation.

Soil testing is recommended for all proposed stormwater facilities that plan to have a recharge or infiltration component to their design. Testing can be less rigorous than that for karst areas or sites with shallow bedrock and groundwater. The investigation is designed to identify and confirm the soil characteristics and determine their suitability, if any, for infiltration practices.

All material penetrated by the boring should be identified, as follows:

Soil permeability should be determined in the field using the procedures described here.

What are general stormwater management guidelines for sites with low infiltration capacity soils?