For the purposes of this section, infiltration BMPs are considered BMPs without underdrains. 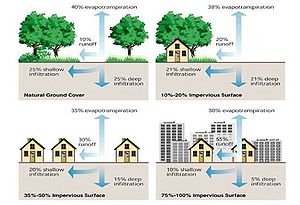 Stormwater runoff is considered to be any water that runs off pervious and impervious surfaces after a rainfall or snowmelt event, with a greater percentage running off from impervious surfaces. In urban areas, runoff can constitute approximately 30 to 55 percent of the water budget. In comparison, runoff may constitute as little as 10 percent in forested or rural areas (FISRWG, 1998).

Role of stormwater infiltration in the natural water cycle

The increase in impervious surfaces can disrupt the natural water cycle and alter the surrounding environment via the decrease of groundwater recharge and the increase of water directly flowing to surface waters. As a likely consequence, this can lead to a reduction in the baseflow of streams, a decrease in the elevation of the groundwater table, and transport of sediment and pollutant loads into surface waters. A more detailed explanation of stormwater runoff and its effects on the environment can be found here. 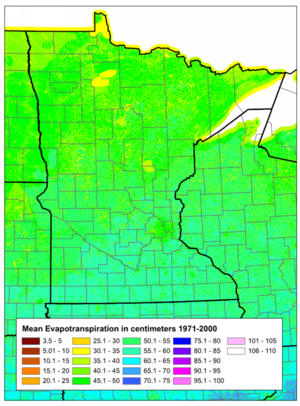 The following general limitations should be recognized when considering infiltration BMPs.

For infiltration prohibitions under the Construction Stormwater General permit, see When infiltration is not authorized under a stormwater permit.

As stormwater travels across the land surface into infiltration BMPs, it can pick up various water quality pollutants and deliver them to the subsurface. There is concern that these pollutants have the ability to travel through the vadose zone and ultimately impact the groundwater. Whether or not this will occur depends on the type and amount of pollutant present, the volume of infiltration, the type of infiltration BMP, and subsurface conditions.

Detailed information on this topic can be found on the page addressing pollutant fate and transport in stormwater infiltration.