Erodibility describes or is a measure of the inherent resistance of geologic materials (soils and rocks) to erosion. Highly erodible geologic materials are readily displaced and transported by water. This page provides basic information about soil erodibility.

There are four types of soil erosion.

RUSLE factors are observable in the field and fairly simple to derive. The R and K variables are generally out of the hands of the construction site operator. Slope (S) and slope length (L) can sometimes be managed or impacted during the design phase of project development. Two RUSLE variables which can be controlled at active construction sites – the cover and practices factors (i.e., variables C and P) – are the focus of the erosion prevention measures. Erosion prevention practices, which mostly include soil preparation, vegetation, and the application of a mulch, blanket, mat, or other cover on bare soil, are the easiest, cheapest, and most effective approach for addressing runoff from construction sites. Sediment control – settling soil particles from temporarily ponded runoff water or filtering it using silt fencing or other materials – is more difficult, more expensive, and requires much more maintenance.

For more information on the USLE and RUSLE, see the following.

Soil erodibility ( K ) is the intrinsic susceptibility of a soil to erosion by runoff and raindrop impact. In general, the following affect K. See adjacent table. 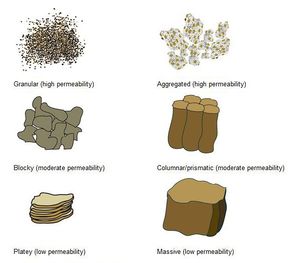