Two case studies are included on this page. The first was developed by the City of Rochester using Version 2 of the Simple Estimator. Version 2 did not allow calculations for sub-watersheds, thus requiring all best management practices (BMPs) to be grouped. The second case study is a hypothetical study area where Version 3 of the Estimator is used.

The following subsections provide an overview of reporting related to TMDL requirements and how the City of Rochester uses the MPCA Simple Estimator to evaluate and demonstrate progress towards TMDL compliance.

General TMDL reporting information can be found at the following links.

Information related to the City of Rochester and the Zumbro Watershed Turbidity TMDL can be found at the following links.

The Zumbro River Watershed Turbidity TMDL (MCPA, 2012) establishes that the City of Rochester is required to reduce daily TSS loading to several stream reaches in the Zumbro River watershed. An overview of general steps which should be taken by MS4s not meeting WLAs for approved TMDLs is included below. More detailed information related to each step can be found in the Model documentation.

Note: the case study example developed in this section is provided as an example of how an individual MS4 can demonstrate WLA compliance using the MPCA Simple Estimator, and was not developed with input or coordination with the MS4 permittees.

TMDLS developed in the Zumbro River Watershed Turbidity TMDL are categorical, meaning that a single WLA is assigned to all tributary MS4s, rather than assigning individual WLAs to each MS4. Additionally, TMDLs developed in the report separate allocations into flow regimes (or “flow zones”). TMDLs developed for streams and rivers are often developed for five (5) flow regimes shown, where “high” represents the top 10 percent of highest flows and pollutant loading observed, “low” represents the lowest 10 percent of flows and pollutant loading, etc. TMDLs structured in this way pose challenges to individual MS4s attempting to comply or evaluate compliance with the assigned MS4 wasteload allocation(s), including

The MPCA provides guidance on how to separate categorical WLAs into individual MS4 WLAs (see “Guidance for developing a TMDL implementation plan for MS4 storm water - “Target loads for each MS4”).

While continuing to develop their individual WLA status assessment, the City of Rochester is demonstrating progress towards WLA compliance through implementation of water quality BMPs and adaptive management (see the SWPPP Reauthorization Form and TMDL Annual Report Form). 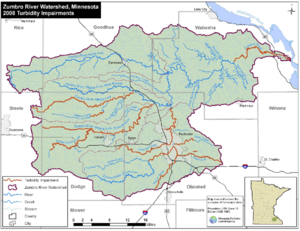 Note: if the applicable MS4 area is not clearly outlined within the TMDL, mapping and associated digital files can be requested directly from the MPCA. The MPCA maintains a database of drainage area files which can be downloaded from the source: PLACEHOLDER FOR LINK.

3. Review the TMDL modeling period and existing BMPs incorporated into the TMDL (i.e., determine the baseline condition used to establish the WLA). In addition to determining existing loading and required pollutant reduction, it is critical to determine (a) what modeling period was used the establish the TMDL and (b) what BMPs were incorporated into the TMDL model used to develop WLA reduction targets. Before selecting an annualized model (i.e., models that produce annualized, rather than continuous results), it is critical to first make sure that applicable TMDLs are also developed on an annualized basis (e.g., required pounds of TP reduction per year). If the TMDL was developed for a non-annualized period (e.g., the April to October growing season), annualized models like the MIDS Calculator, MPCA Simple Estimator, etc. may not be the best choice for evaluating WLA compliance. Note: if desired, the permittee can contact and work with MPCA stormwater staff to adjust the non annualized WLAs (e.g., growing-season) to annualized WLAs.

Stream reach TMDLs in the Zumbro River Watershed Turbidity TMDL were developed using the load duration curve approach (i.e., the TSS water quality standard was applied to flow duration curves developed from long term stream flow monitoring data). Because stream TMDLs developed using this approach are based on long-term flow monitoring datasets, the developed TMDL is representative of observed flow conditions during the monitoring period and implicitly includes any and all constructed and existing BMPs in the watershed throughout the monitoring dataset used. As discussed in Appendix D of the Zumbro River Watershed Turbidity TMDL (MPCA, 2012), continuous flow and turbidity monitoring data collected from 2007 through 2008 was used to develop TMDLs for each reach. For this reason, 2008 is considered the baseline year for the TMDL, meaning that any BMPs constructed post-2008 within the City of Rochester can be incorporated into the City’s MPCA Simple Estimator model and counted towards achieving WLA reduction goals.

4. Develop an inventory of existing water quality BMPs related to the TMDL pollutant. As outlined in the 2017 City of Rochester TMDL Annual Report Form, the City began an inventory or structural and non-structural BMPs in 2014. At that time, there were a total of 51 TSS reduction BMPs within the City. As of 2017 report, there are now 89 TSS reduction BMPs indicating that the City of Rochester has implemented 38 structural and non-structural BMPs since developing the inventory in 2014.

Per the TMDL modeling period discussion outlined in step #3, TMDLs developed within the Zumbro River Watershed Turbidity TMDL are reflective of watershed conditions in the period of 2007 to 2008. This means that all structural (e.g., wet detention pond) and non-structural (e.g., street-sweeping) BMPs constructed or implemented post-2008 can be counted towards the City of Rochester’s WLA reduction targets. The City of Rochester’s 2017 TMDL Annual Report Form inventory of BMPs tracks the “year when BMP was implemented”, making it easy to determine which BMPs can be counted towards WLA reduction targets. 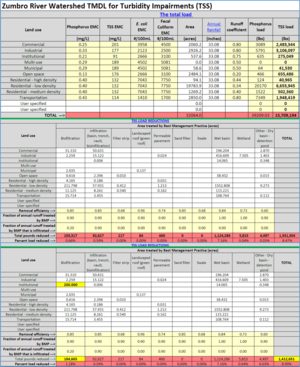 Screen shots of the Simple Estimator. The top image shows the acreages for this TMDL and the resulting pollutant loads. The middle image shows BMPs implemented by Rochester and reported in the 2017 Annual Report Form, including pollutant pounds and percent reduced. The bottom image shows projected load reductions associated with a proposed biofiltration practice. Click on image to enlarge.

b. Determine existing and WLA load reduction. After generating area inputs for land use and all modeled BMPs, area values can be entered into the MPCA Simple Estimator to evaluate existing load reduction. In the case of the Zumbro River Watershed Turbidity TMDL, it is recommended that a version of the existing conditions model be retained which only include BMPS constructed or existing in the watershed prior to 2008 (the TMDL modeling period, see discussion in step #3).

Using the MPCA Simple Estimator, the City of Rochester has tracked year-to-year TSS reduction from 2014 through 2017. 2014 is the first year of reporting included in City of Rochester’s 2017 TMDL Annual Report Form and includes removal from BMPs existing or constructed prior to 2014.

7. Utilize model to track progress towards meeting the WLA (e.g., use the model to evaluate BMPs and incorporate BMPs as they are implemented). As discussed in step #5, above, the existing conditions MPCA Simple Estimator model can be updated as BMPs are constructed to track progress towards attaining WLA compliance. Because the MPCA Simple Estimator does not require BMP dimensional information and only requires that the user input the cumulative tributary area to ten (10) BMP types, the model can be updated as BMPs are implemented throughout the watershed, and updated cumulative TSS reduction values can be calculated and compared back to previous model versions to evaluate progress towards achieving target WLA reductions., the example updated as BMPs are implanted.

To illustrate how the MPCA Simple Estimator model can be used to track TSS reduction and progress towards WLA reduction targets, it is assumed that several campuses of institutional land use enact a biofiltration implementation plan. After completion, it is assumed that a total of 200 acres of previously untreated institutional land use is now treated by biofiltration BMPs. Values in bold text in the lower portion of the image on the left highlight values that have been updated in the City of Rochester’s 2017 MPCA Simple Estimator Model. The table on the right shows how cumulative reduction can be tracked year-to-year.

The Rochester case study illustrates how Version 2 of the Simple Estimator was used. The MPCA updated the Estimator to Version 3 in summer of 2019. There were four primary enhancements to the estimator.

You can find Simple Estimator examples using Version 3 here. For general guidance, read the 7 steps from the Rochester case study above, since they are applicable to the linked example except for specific differences between Versions 2 and 3 of the Estimator. The example utilizes a site with three subwatersheds and proceeds through a series of implemented practices.