This site is currently undergoing final review. For more information, open this link.
This page is under review during the MS4 Phase 2 permit reissuance period 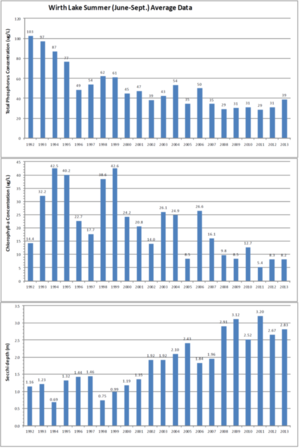 The Wirth Lake Excess Nutrients TMDL Report (MPCA, 2010) was approved in 2010 after Wirth Lake was originally listed for excess nutrient (phosphorus) impairment. Wirth Lake is a 38-acre lake with a maximum depth of 26 feet. All known phosphorus sources to Wirth Lake were considered in the development of the TMDL and the Wirth Lake Final TMDL Implementation Plan. These sources include:

Stormwater from approximately 77 percent of the Wirth Lake watershed currently drains through some form of wet detention (e.g. wet pond) before it enters Wirth Lake. A significant untreated source of phosphorus to Wirth Lake occurs when flood flows in Bassett Creek backflow to Wirth Lake. Other sources include runoff from highway right-of-ways and sediment release of phosphorus (i.e., internal phosphorus loading).

The adjoining table compares in-lake water quality observations to BATHTUB model results for the calibration and validation time periods. The calibrated BATHTUB model was then used to predict how the lake water quality would change if the Wirth Lake outlet were configured to completely prevent backflow from Bassett Creek. This improvement option would decrease in-lake TP concentration for the 2005-2006 water year from 46 to 38 μg/L and both TP and SD would meet the eutrophication criteria for Wirth Lake.

In 2012, a new lake outlet structure was installed to prevent backflow events from Basset Creek from deteriorating Wirth Lake’s water quality. In 2013, the 10-year average of the most recent water quality data (2003-2012) indicated that Wirth Lake met the MPCA deep lake standards for TP and SD. The 10-year average chl-a concentration for Wirth Lake was 14.7 µg/L, which was within 1 µg/L of the 14 µg/L chl-a criteria. If water quality monitoring data from 2013 is considered, the 10-year (2004-2013) average chl-a concentration for Wirth Lake becomes 12.9 µg/L, while the 10-year average TP (32.5 µg/L) and SD (2.56 m) are both significantly better than the respective listing criteria. Additionally, historic water quality data trend analysis indicated that, over the entire water quality monitoring data period (1992-2013), there have been significant improvements for all three water quality criteria at the 95 percent confidence level. The same is true for the trend analysis of the more recent data (2003-2012). Based on this evidence, Wirth Lake was delisted for lake eutrophication/excess phosphorus in 2014 and the tributary MS4s are no longer required to develop a compliance schedule or address this impairment in annual reporting. Wirth Lake average TP concentrations, chl-a concentrations, and SD depths for the period of 1992-2013 are shown in the adjoining figure. 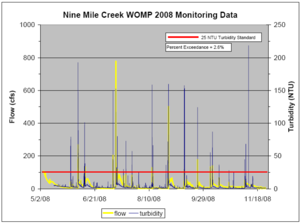 Nine Mile Creek was placed on MPCA’s 303(d) list of Impaired Waters in 2002 after it was determined that 32.5% of the lab turbidity data from the Metropolitan Council Environmental Services (MCES) Watershed Outlet Monitoring Program (WOMP) monitoring location exceeded the 25 NTU turbidity standard, which has since been replaced by ecoregion-based TSS standards. TSS standards for each use classification may be exceeded no more than ten percent of the time, which is the same frequency that had been specified for the turbidity standard.

Following the 2005 monitoring season, an evaluation of the turbidity data (see adjoining figure) indicated that Nine Mile Creek turbidity levels had dropped significantly since the Lower Valley Restoration Project implementation during the winter of 1992/1993.

In 2007, the Nine Mile Creek Watershed District (NMCWD) submitted multi-site turbidity monitoring data and watershed analysis to MPCA for consideration in delisting Nine Mile Creek for turbidity. Continuous probe data from three upstream sites showed that the turbidity standard was exceeded less than 10 percent of the time. However, lab turbidity data from the MCES WOMP monitoring location indicated that the turbidity standard was still exceeded in 26 percent of samples.

A regression relationship was used to translate continuous turbidity measurements collected in 2008 using the DTS-12 (continuous) probe into NTU units for direct comparison to the 25 NTU turbidity standard. The resulting turbidity estimates were plotted along with observed stream flow rates and showed that the turbidity standard would have been exceeded less than 3 percent of the time during 2008.

Because 2008 was a dry year, Barr compared the flow duration characteristics from 2008 to the longer-term dataset (1993-2005) from the Nine Mile Creek WOMP site. This analysis confirmed that considerably lower flows occurred during 2008 compared to the period of 1993-2005. By applying the identified turbidity-flow rate relationship to the long-term (1995-2003) flow dataset, Barr’s analysis confirmed that the 25 NTU standard would be met more than 90% of the time and approach 95% compliance. In 2010, Nine Mile Creek was delisted for turbidity/TSS impairment. 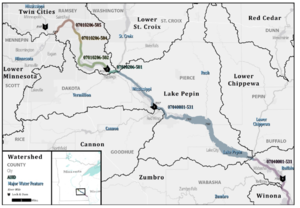 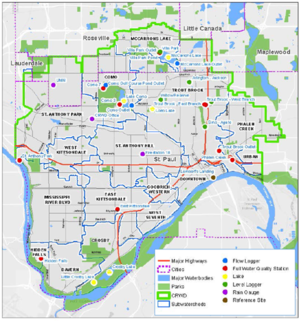 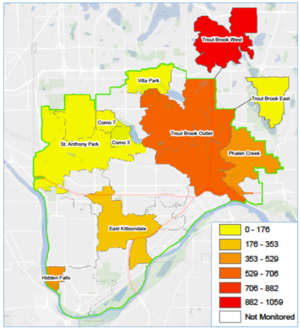 The South Metro Mississippi River TSS TMDL report (MPCA, 2015) was approved in 2016 to address aquatic life impairment related to excess turbidity (TSS). The report established TSS TMDLs for five stream reaches in the South Metro – Mississippi River (South Metro) watershed, extending from River Mile 844 (the confluence with the Minnesota River), to River Mile 780 (downstream of the confluence with the Rush River, Wisconsin) as shown in the adjoining figure. All known sources of TSS loading were considered in the development of the TMDL and general implementation strategy. These sources include

A large number of MS4s exist within the area tributary to the impaired reaches. For this reason, rather than develop individual WLAs for each MS4, the TMDL establishes a categorical wasteload allocation ( WLA) of 154 lbs/acre/year for all MS4s within the impaired watershed. 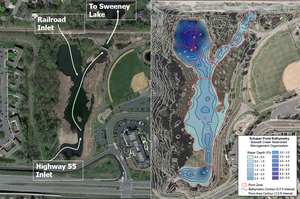 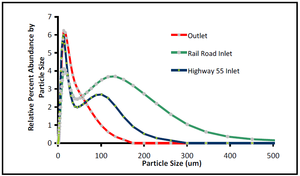 The Sweeney Lake Total Phosphorus TMDL (SEH and Barr Engineering Company, 2011) was approved in 2011 after the lake was originally listed for excess nutrient (phosphorus) impairment. The Sweeney Lake TMDL allocations called for a watershed phosphorus load reduction of 99 pounds from June 1 through September 31 each year. Since there is limited space available for additional stormwater treatment, TMDL implementation strategies were primarily targeted to improve the performance of existing BMPs to contribute to the watershed phosphorus reduction goal. One option in the report was modification of a pond to improve phosphorus removal performance because it is the last pond in the largest drainage area tributary to Sweeney Lake.

The Bassett Creek Watershed Management Organization initiated the development of a Feasibility Report (Barr Engineering Company, 2012) to determine if and what kind of pond modification could enhance phosphorus removal, the cost and permitting requirements of potential modifications, and identify the most cost-effective modification to the pond to partially or fully meet the applicable external phosphorus loading reduction requirements. Design alternatives provided in the feasibility report were based on the average flow conditions used for TMDL development, but it was suspected that high flows may affect performance through scouring or short-circuiting of flow through the pond.

Auto samplers, level sensors, and area velocity meters were installed at the pond outlet, southern inlet (called Highway 55 inlet in the feasibility report), and northern inlet (called Rail Road inlet in the report) to evaluate the pond’s phosphorus removal performance and develop a model to evaluate how removal could be enhanced by pond modifications. Samples were collected simultaneously at both inlets and the outlet for several storm events. For all events, samples were analyzed for total phosphorus, total dissolved phosphorus, total suspended solids, and volatile suspended solids. Flow was measured continually during the summer. It cost approximately $40,000 to complete the monitoring (including field sampling and laboratory analytical work) for this study.

Since approximately 90 percent of the phosphorus load to the pond came from the Highway 55 inlet, but only 35 percent of the pond volume is provided to settle phosphorus from this source, diversion of influent water to the north west lobe of the pond was identified as a way to provide additional phosphorus settling time and improve overall phosphorus removal performance in the pond. This improvement option was implemented and is currently being monitored by the Bassett Creek Watershed Management Commission for treatment performance.