This site is currently undergoing revision. For more information, open this link.
This page is not yet developed 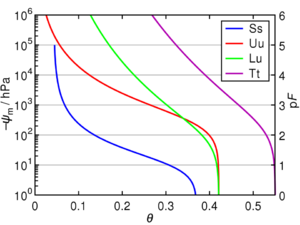 Soil properties related to water content and water retention are critical to plant establishment and growth. Understanding some basic terms related to soil water is important for understanding water storage and transport. These terms are illustrated in the adjacent schematic.

Water infiltrates a dry soil through both gravitational forces and suction forces exerted by soil materials. Water is held in soil by suction forces exerted by materials such as clay. Water not held under suction drains freely due to gravitational forces. The time for a soil to drain due to gravity varies depending on soil texture and structure. Sands drain more quickly than clays because of more direct, well-connected drainage pathways. A soil's field capacity, or the amount of water remaining after gravity drainage, varies with soil and is not a exact value. Typical field capacity for sandy soils is 0.10-0.15 cm3/cm3 and for clays is about 0.3 cm3/cm3. Water subject to gravity drainage is available to plants, but because drainage occurs rapidly in most soils (less than 48 hours), it is generally not an important source of water to plants. Below field capacity, plant roots must exert force to extract water held to soil. As a soil dries, the amount of suction required increases until a plant can no longer extract water, typically at about-15 bars. This is called the wilting point. Water between the wilting point and field capacity is plant available water. Typical plant available water is about 0.10 cm3/cm3 for sand and clay and about 0.15-0.20 for loams. The lower values for sand is due to low water content of the soil, while the low value for clays is due to clays tightly holding water.

Water content can be measured in the lab or in the field. For point-in-time measurements, lab methods are satisfactory, being easy to take and inexpensive. Continuous measurements of soil water content require in-field methods that are often expensive and sometimes subject to inaccuracies. For information on sampling for water content, link here.

Generalized curves of hydraulic conductivity as a function of water content for a sand and a clay. Image: University of California, Davis

Soil infiltration refers to a soil's ability to allow water movement into and through the soil profile. Infiltration is important to movement of solutes, including pollutants, and to recharge of groundwater. Some basic terms include the following.

In stormwater applications, the supply of water usually exceeds the infiltration capacity of the soil, resulting in ponding. Flow of water and solutes under ponded conditions differs from processes occurring under unsaturated conditions.

The terms infiltration rate and hydraulic conductivity are sometimes used interchangeably, but this is incorrect. For stormwater applications, where the rate of water delivery to a stormwater practice usually exceeds the infiltration rate of the soil, saturated hydraulic conductivity (Ksat) is the property of greatest interest. Saturated hydraulic conductivity is a constant for a specific soil in a specific location. It is affected by soil texture (pore size distribution), structure, and pore characteristics (e.g. pore connectivity). These in turn can be affected by human activity at a site, such as soil compaction, tillage, and addition of amendments.

Ksat varies considerably over relatively short distances, even within an area having a single mapped soil unit. It is not uncommon for Ksat to vary by up to three orders of magnitude at a single development site ([1], [2], [3], [4], [5]). Deb and Schukla (2012, free access) provide a nice discussion of saturated hydraulic conductivity.

Ksat should be measured directly in the field, preferably with either a permeameter or double ring infiltrometer. However, it is more commonly estimated from soil borings taken in the field. Soil texture is determined from borings and Ksat, or infiltration rate, is determined from the adjacent table. If borings are used to determine Ksat at a site, it is important to take collect an appropriate number of borings and to follow proper sampling procedures. Sampling procedures are described on this page. Methods for determining soil infiltration rate in the field are described on this page.

*NOTE that this table has been updated from Version 2.X of the Minnesota Stormwater Manual. The higher infiltration rate for B soils was decreased from 0.6 inches per hour to 0.45 inches per hour and a value of 0.06 is used for D soils (instead of < 0.2 in/hr).
Source: Thirty guidance manuals and many other stormwater references were reviewed to compile recommended infiltration rates. All of these sources use the following studies as the basis for their recommended infiltration rates: (1) Rawls, Brakensiek and Saxton (1982); (2) Rawls, Gimenez and Grossman (1998); (3) Bouwer and Rice (1984); and (4) Urban Hydrology for Small Watersheds (NRCS). SWWD, 2005, provides field documented data that supports the proposed infiltration rates. (view reference list)
aThis rate is consistent with the infiltration rate provided for the lower end of the Hydrologic Soil Group A soils in the Stormwater post-construction technical standards, Wisconsin Department of Natural Resources Conservation Practice Standards.
bThe infiltration rates in this table are recommended values for sizing stormwater practices based on information collected from soil borings or pits. A group of technical experts developed the table for the original Minnesota Stormwater Manual in 2005. Additional technical review resulted in an update to the table in 2011. Over the past 5 to 7 years, several government agencies revised or developed guidance for designing infiltration practices. Several states now require or strongly recommend field infiltration tests. Examples include North Carolina, New York, Georgia, and the City of Philadelphia. The states of Washington and Maine strongly recommend field testing for infiltration rates, but both states allow grain size analyses in the determination of infiltration rates. The Minnesota Stormwater Manual strongly recommends field testing for infiltration rate, but allows information from soil borings or pits to be used in determining infiltration rate. A literature review suggests the values in the design infiltration rate table are not appropriate for soils with very high infiltration rates. This includes gravels, sandy gravels, and uniformly graded sands. Infiltration rates for these geologic materials are higher than indicated in the table.
References: Clapp, R. B., and George M. Hornberger. 1978. Empirical equations for some soil hydraulic properties. Water Resources Research. 14:4:601–604; Moynihan, K., and Vasconcelos, J. 2014. SWMM Modeling of a Rural Watershed in the Lower Coastal Plains of the United States. Journal of Water Management Modeling. C372; Rawls, W.J., D. Gimenez, and R. Grossman. 1998. Use of soil texture, bulk density and slope of the water retention curve to predict saturated hydraulic conductivity Transactions of the ASAE. VOL. 41(4): 983-988; Saxton, K.E., and W. J. Rawls. 2005. Soil Water Characteristic Estimates by Texture and Organic Matter for Hydrologic Solutions. Soil Science Society of America Journal. 70:5:1569-1578.

Preferential flow, often called short-circuiting, is the rapid movement of water and associated solutes in large soil pores. Macropores are often defined as pores greater than 75 microns in diameter. It most commonly occurs under saturated water conditions but may occur in unsaturated soils associated with soil hydrophobicity that develops under extremely dry settings and on clay-rich textures. For stormwater applications, macropore flow occurs primarily under saturated conditions since the rate of water delivery to a soil typically exceeds the soil infiltration rate, resulting in ponding. However, soil microrelief can lead to locally saturated areas within a soil, initiating macropore flow in those areas ([6], [7], [8], [9]).

In soils with significant macroporosity, a high percentage of annual water and solute movement can occur within the macropores. This can lead to rapid movement of solutes, including pollutants of concern, deep into the soil profile and eventually into groundwater ([10], [11], [12], [13]). Beven and Germann (2013) and Zhang et al. (2018) provide discussion of preferential flow in soil, including extensive reviews of the literature.

The role of preferential flow in bioretention practices has only recently been studied ([14], [15], [16], [17], [18]). Mechanisms of macropore development in bioretention systems are not yet understood.