Warning: The Construction Stormwater General permit prohibits infiltration in areas where high levels of contaminants in soil or groundwater will be mobilized by the infiltrating stormwater.

The Construction Stormwater General Permit prohibits the use of infiltration BMPs in areas where high levels of contaminants will be mobilized by the infiltrating stormwater. However, stormwater infiltration BMPs may be feasible at sites with known or suspected contaminated soils or groundwater under certain conditions. This article provides an overview of the types of contaminated sites that may be encountered when considering whether or not to infiltrate stormwater. Contaminants likely to be found at these sites and regulatory information are included in the discussion.

A Superfund site is a site that is regulated under the Superfund program, established under the Comprehensive Environmental Response, Compensation and Liability Act of 1980 (CERCLA) and implemented by the U.S. EPA. These sites are abandoned, uncontrolled hazardous waste sites (U.S. EPA, 2011). A list of sites can be found on the National Priorities List. Information can also be found on the MPCA’s webpage under the Superfund Program Site Search. As with brownfields, a wide variety of pollutants can be present. Some of the common pollutants found at Superfund sites include, but are not limited to, industrial solvents (e.g. trichloroethylene [TCE], tetrachloroethene [PCE], and trichloroethane), waste inks, caustics and acids, paints and paint thinners, VOCs, and asbestos.

RCRA, or Resource Conservation and Recovery Act, sites are hazardous wastes sites but, unlike Superfund sites, are currently in use (U.S. EPA, 2011). Many of the pollutants found at Superfund sites will also be found in RCRA sites. A list of RCRA sites can be found on the MPCA’s webpage under RCRA Cleanup Site Search.

Storage tank sites that are of concern are those sites which store petroleum or hazardous substances. Common pollutants stored in tanks are petroleum products (e.g., gasoline and diesel), fuel oil, and other liquid hazardous chemicals. A list of leaks/tank sites can be found on the MPCA’s webpage under Leaks/Tanks Search. The MPCA provides a search engine called What’s in My Neighborhood This online application allows a user to search for known contaminated sites in areas near or on a site proposed for a stormwater BMP.

What makes a site contaminated?

Stormwater refers to any of the water running off of the land’s surface after a rainfall or snowmelt event. The majority of stormwater is generated from impervious surfaces, such as parking lots, roofs, and sidewalks, but slowly permeable and compacted soils can contribute to runoff.

When managing stormwater, it is preferred to keep stormwater as close to its source as possible. This often means infiltrating stormwater through one of several Best Management Practices (BMPs). These BMPs are designed to treat stormwater as the infiltrating water percolates through the BMP, thus ensuring the infiltrating water meets appropriate standards prior to being discharged to groundwater or surface waters. However, if pollutants are present below the infiltration practice, they may be mobilized. It is therefore not desirable to infiltrate in these situations. Stormwater that would mobilize contaminants if infiltrated should be treated through one of several other practices, such as filtration or sedimentation practices.

Minnesota’s Construction Stormwater General Permit prohibits stormwater infiltration in areas where high levels of contaminants in soils or groundwater will be mobilized by the infiltrating stormwater. 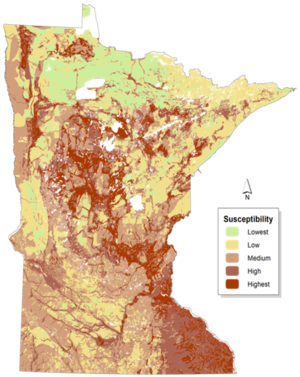 Sensitive areas are of particular concern for contaminated sites. “Sensitive Areas” are defined in Minnesota Statues 103H.005 Subd. 13 as geographic areas defined by “natural features where there is a significant risk of groundwater degradation from activities conducted at or near the land surface.” The figure to the right shows the relative susceptibility of areas in Minnesota as delineated by the MPCA. Note that maps depicting groundwater sensitivity, particularly state maps such as the one shown here, serve only as initial screening tools. Additional information about groundwater pollution sensitivity, including definitions of the five relative classes of geologic sensitivity (based on time of travel) provided by the MN DNR is available here. The index is based on the Groundwater Contamination Susceptibility model by the Minnesota Pollution Control Agency (Porcher, 1989).

The MPCA’s Brownfield Program Response Action Plans, 2013 (RAP) provides guidance for stormwater management at sites under the Petroleum Brownfields (PB) Program and the Voluntary Investigation and Cleanup (VIC) Program. While the Brownfield program does not approve stormwater plans, the MPCA does require that applicable stormwater design information be included in the RAP. This program offers the following options (MPCA, 2013).