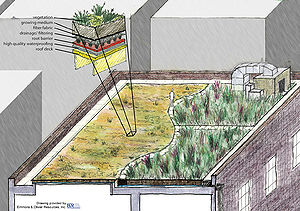 Schematic showing the different components of a green roof. Thicknesses of some layers vary with the design (e.g. extensive vs. intensive roofs). 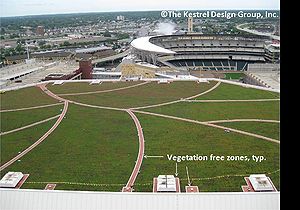 One of the goals of this Manual is to facilitate understanding of and compliance with the MPCA Construction General Permit (CGP), which includes design and performance standards for permanent stormwater management systems. Standards for various categories of stormwater management practices must be applied in all projects in which at least one acre of new impervious area is being created.

Although few roofs will meet or exceed the one acre criteria, roofs can contribute to the one acre determination at a site. Therefore, green roofs can be used in combination with other practices to provide credit (stormwater credit) for combined stormwater treatment, as described in the Construction permit. Due to the statewide prevalence of the MPCA permit, design guidance for green roofs is presented with the assumption that the permit does apply. Also, although it is expected that in many cases the green roof practice will be used in combination with other practices, standards are described for the case in which it is a stand-alone practice.

Green roofs are an ideal and potentially important BMP in urban retrofit situations where existing stormwater treatment is absent or limited. Green roofs can be particularly important in highly urban and ultra-urban environments settings.

The following table provides guidance regarding the use of green roofs in areas upstream of special receiving waters.

Infiltration and filtration bmp1 design restrictions for special waters and watersheds. See also Sensitive waters and other receiving waters.
Link to this table

1Filtration practices include green roofs, bmps with an underdrain, or other practices that do not infiltrate water and rely primarily on filtration for treatment.
2 Applies to groundwater drinking water source areas only; use the lakes category to define BMP design restrictions for surface water drinking supplies

A portion of rain that falls on green roofs is stored in the green roof media and eventually lost to evapotranspiration. Green roofs therefore provide water quantity treatment.

Surface runoff almost never occurs on a green roof except during massive rainfalls. The FLL (Forschungsgesellschaft Landschaftsentwicklung Landschaftsbau e.v.) guidelines for saturated hydraulic conductivity (k) of growing medium for multi-course extensive green roofs, for example, is 0.024 to 2.83 inches per minute. Green roofs are analogous to thin groundwater systems. Discharge from a green roof is best understood as ‘groundwater baseflow’ from this system. This is apparent when you consider the time delay between rainfall peaks and discharge peaks on green roofs. For a green roof area of 5,000 square feet the delay may be 60 minutes, versus 15 minutes if a surface flow ‘time of concentration’ was calculated using the Manning formula, or similar. Green roofs do not have curve numbers, since nothing infiltrates.

Times of concentration in the context of TR-55, do not apply to green roofs. There should be no surface flow under normal conditions. Rather, the rate at which water is discharged from the roof depends on the design of the subsurface drainage zone. The appropriate parameter is transmissivity.

The water storage and evapotranspiration (ET) potential of the green roof growing media are dynamic. The pattern of water uptake and release from the surface media can be summarized as follows.

Preliminary research results indicate that transmissivity of the drainage layer significantly affects how much rain a green roof retains and evapotranspires. Transmissivity of typical geocomposite drain sheets ranges from 0.050 to 0.200 square meters per second (ASTM D4716 and ASTM 2396), which is 50 times greater than that of a typical 2 inch granular drainage layer (0.001 to 0.004 square meters per second). Lower transmissivity results in longer residence times for rainfall in the green roof. This translates to more efficient water absorption and longer delay in peak runoff rate. Preliminary research results indicate that green roofs that have a drainage layer with lower transmissivity have significantly higher ET rates.

A model that accounts for these dynamic processes is needed to accurately reflect green roof hydrology. However, studies and field experience have found that maximum media water retention (MMWR), the quantity of water held in a media at the maximum media density of the media using the ASTM E2399 standard testing procedure, provides a very approximate estimate of event green roof runoff retention potential. The aggregated effect of storage and ET processes in green roofs can result in annual runoff volume reductions of 60 percent or more. However, the increase in retention storage potential with increasing soil depth is not linear. This is a consequence of the non-uniform moisture distribution in the soil column. Consequently increasing media thickness above 4 to 6 inches does not provide significant increase in retention storage potential in many instances.

Annual runoff volume reduction in northern temperate regions is regularly measured to be 50 to 70 percent when the media thickness is 3 to 6 inches (e.g. Berghage et. al., 2010; Carter and Rasmussen, 2006; Van Woert et. al., 2005; Moran et. al., 2005; Van Seters et. al., 2007; Berghage et. al., 2009). While no green roofs have been monitored for annual stormwater retention in Minnesota, green roofs in Minnesota’s climate (with shorter storms, and generally enough time to allow evapotranspiration to renew much of the soil water holding capacity between rain events) are expected to retain about 70 percent of annual runoff. Berghage et al (2010), studying an extensive green roof with 3 inches of growing medium in Chicago IL and a climate similar to Minnesota’s climate, found 74 percent annual retention over a 2 year study period that included 106 precipitation events. Higher reductions are attainable by maximizing design for stormwater retention and evapotranspiration (e.g. Compton and Whitlow, 2006).

When considering the influence of green roofs on runoff water quality, emphasis should be placed on the total mass of pollutants that may be released. Rainwater is generally considered non-polluted, but can contain substantial nitrates, as well as traces of other pollutants, such as heavy metals and pesticides (Berndtsson, 2010). Generally, organic material in green roofs can be very effective in binding heavy metals (e.g., zinc, arsenic, cadmium, lead, and copper). Consequently, green roofs are excellent practices where airborne pollution by heavy metals is important. Green roofs can also immobilize complex organic pollutant molecules.

Primary sources of nutrients in green roof runoff are atmospheric deposition and leaching from the growing medium and fertilizers. Aggregates, organic materials and amendments used in formulating green roof media should be tested for nutrients to insure that they will not be a potential long-term sources for contaminants. For mature green roofs, the mass of major nutrients (e.g., total nitrogen, total phosphorus, potassium, and magnesium) released during the course of one year will be approximately equal to the mass of nutrients contributed by atmospheric deposition and fertilization over the same period. Green roofs that are efficient in detaining and cycling nutrients will require less fertilization and therefore be less of a concern for water quality.

Rowe (2011) concluded “Overall, it appears that green roofs can have a positive effect on water quality. Based on the data available, green roofs that were a source of pollutants tended to be new, whereas those that were older with established vegetation were not a problem. The initial nutrient load likely is due to decomposition of organic matter that was incorporated into the original mix. Established vegetation and substrates can improve the water quality of runoff by absorbing and filtering pollutants. Of course, water quality of the effluent is dependent on several factors such as substrate composition, substrate depth, plant selection, age of the roof, fertilization and maintenance practices, the volume of rainfall, local pollution sources, and the physical and chemical properties of those pollutants. Also, the use of soluble conventional fertilizers should be avoided due to the adverse impact on stormwater runoff. If nutrient loading is a problem green roofs could be coupled with other low impact development practices such as rain gardens and bioswales.”

Median pollutant removal percentages for several stormwater BMPs. Sources. More detailed information and ranges of values can be found in other locations in this manual, as indicated in the table. NSD - not sufficient data. NOTE: Some filtration bmps, such as biofiltration, provide some infiltration. The values for filtration practices in this table are for filtered water.
Link to this table

TSS=Total suspended solids, TP=Total phosphorus, PP=Particulate phosphorus, DP=Dissolved phosphorus, TN=Total nitrogen
1Data for metals is based on the average of data for zinc and copper
2BMPs designed to infiltrate stormwater runoff, such as infiltration basin/trench, bioinfiltration, permeable pavement with no underdrain, tree trenches with no underdrain, and BMPs with raised underdrains.
3Pollutant removal is 100 percent for the volume infiltrated, 0 for water bypassing the BMP. For filtered water, see values for other BMPs in the table.
4Dry ponds do not receive credit for volume or pollutant removal
5Removal is for Design Level 2. If an iron-enhanced pond bench is included, an additional 40 percent credit is given for dissolved phosphorus. Use the lower values if no iron bench exists and the higher value if an iron bench exists.
6Lower values are for Tier 1 design. Higher values are for Tier 2 design.